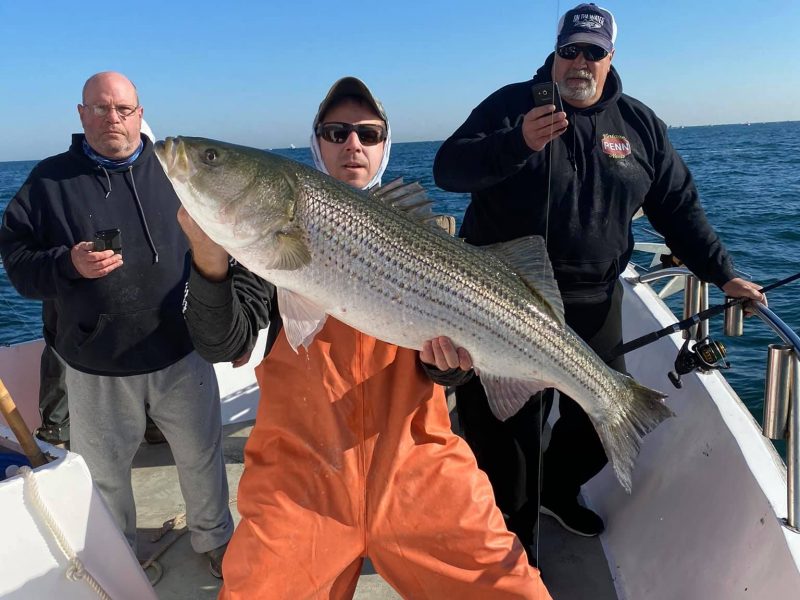 Trophy striped bass in the 40-to-50 pound range are being caught in Raritan Bay and off the beaches of Monmouth County. Most of the fish are well over 38-inches and are being released. The bass aren’t shy and are hitting diamond jigs, shad, plugs, big spoons, eels, and bunker. There’s a plethora of bait around including adult and peanut bunker, sand eels, and rain bait. From the shore, surfcasters aren’t faring nearly as well, but the beach bite seems to be improving. Nonetheless, bluefin tuna are still around, and bottom fishing for porgies and tautog is keeping folks happy.

Rick, of Tackle World in Rochelle Park, says stripers are the main target for anglers right now. There are loads of fish around and a lot of boats trying to catch them. Rick says some of the bigger fish have been in deeper water. A friend of his was adding a 6-ounce weight to his live eel rig. However, not everyone is after bass. He says the tautog bite is solid, and starting Nov. 16, the limit increases from 1 fish to 5 fish.

Submit your photos on Instagram using the hashtag #onthewatermagazine, or email them to feedback@onthewater.com.

Mike, of Giglio’s Bait and Tackle in Sea Bright, says while the boats are going nuts on the big bass in the bay and off the beach, stripers remain relatively scarce for surfcasters. Mike says folks are picking off schoolies, with an occasional keeper here and there. But it’s a far cry from the catches of boat anglers. There’s a ridiculous amount of bait around, adult and peanut bunker, and everyone is just waiting for the bass to come close, he says.

Mike, of TAK Waterman, says the beach bite is picking up with some bigger fish moving through the surf. Sand eels are on the menu in his neck of the woods and keepers are not that rare. The Shrewsbury and Navesink rivers are still holding bass, Mike says. There’s still a lot of bait in both rivers that has yet to move. Bluefin tuna are popping up not too far offshore, but there hasn’t been much talk about yellowfin. The hard west wind at the beginning of the week kept boats at the dock. Nonetheless, there is a lot of bait off the beach in Ocean Grove, just not many fish on it. A few schoolies are being caught, but we’re still waiting on bigger fish.

Capt. Pete Sykes, of Parker Pete’s Sportfishing, says the striper fishing on both boats has been incredible. Monster bass up to 50-pounds are being caught on jigs, shad, and live bait. The only drawback is that the majority of the fish are over 38-inches, and must be released. A couple of the trips on Wednesday did see some smaller fish make it into the cooler. Sykes says there are bass out to the 3-mile line, feeding mostly on sand eels. He says the big pods of bunker close to shore haven’t always been holding fish. Capt. Sykes is running open boat striped bass trips with a limit of 18 people.

John, of Reel Seat in Brielle, says the big stripers are receiving quite a bit of attention. Boats out of the Manasquan Inlet are heading north to catch them. He also says there are reliable reports of bluefin tuna relatively close to shore. Meanwhile, the yellowfin tuna continue to bite at the Triple Wrecks. There is certainly plenty of bait around to keep them happy. Tautog fishing remains good at the inlet and on the wrecks and reefs.

Dylan, of Fishermen’s Supply in Point Pleasant Beach, says Tropical Storm Zeta made the water dirty, but by Wednesday, it was clearing up. The Manasquan River is holding stripers from 12-inches to 35-pounds. Dylan says there were also reports of big bass feeding on sand eels off Monmouth Beach on Wednesday. Furthermore, the tautog bite is red hot in the Point Pleasant Canal.

Capt. Matt Sosnowski, of the Norma-K III in Point Pleasant Beach, says the striped bass fishing on Wednesday was excellent, with fish up to 50-pounds. The bass are hitting Ava 27’s and 47’s with green, red, and black teasers. Only a few of the fish were in the 28-to-38-inch slot. The Norma-K III will be striper fishing through Nov. 15, but then will switch over to blackfish.

Capt. Kenny Namowitz, of the Mimi VI in Point Pleasant Beach, says the striped bass jig bite is good. He also says the bottom fishing trips are producing plenty of big porgies, and a lot of short black sea bass. There are still some keepers around, but most of bigger fish have moved to deeper water. The Mimi VI is running special tog trips every Monday, starting Nov. 23. The trips are limited to 15 anglers and filling up quickly.

Gary, of Capt. Bill’s Landing in Point Pleasant Beach, says that in addition to all the big bass around, the yellowfin tuna continue to bite at the Triple Wrecks, and the bluefin aren’t too far offshore. Tautog fishing, he says, is very good at the Manasquan Inlet and the Point Pleasant Canal.

Frank, of Gabriel Tackle Co. in Brick, says there were reports Wednesday of striper catches off Asbury Park. trolling, live-lining, and jigs. Furthermore, the surf striper bite is a mixed bag with a few fish showing up here and there, he says. Tautog fishing is good in the canal and at the inlet. Stripers are also being caught in the canal at night and at the bridges in the Manasquan River. Eels, Daiwa SP Minnows, and Kettle Creek shads are catching the river fish.

Pete, of Charlie’s Bait and Tackle in Normandy Beach, says things are starting to come together. There’s a lot of bait around and while the big fish have yet to make an appearance, folks are picking up bass from the beaches every now and then. Registration is underway at the shop for the 9th Annual Surf Turkey Striped Bass Tournament over the Thanksgiving Weekend. All entry fees go toward the cash prizes.

Phil, of Dock Outfitters in Seaside Heights, says the fishing is quiet. He’s waiting for all of the fish up north to make their way south.

Ray, of Grumpy’s Tackle in Seaside Park, says the biggest beach bass of the fall is a 46-inch monster, caught by Nick Schemmel at Island Beach State Park on Monday. The big fish hit an AOK T-Hex lure that was bought at the shop that morning. Ray says the amount of bass being caught from the surf is increasing, but you have to get there before sunrise.

Francine, of Betty & Nick’s Bait and Tackle in Seaside Park, says there’s plenty of bait, but a lack of bass. The gannets were going crazy diving on shad or herring earlier in the week.

Capt. Jay Richardella, of Side Job Charters in Belmar, says the striper fishing is the best in years, with many trophy fish coming over the rails. He’ll be chartering as long as the jumbo striper run lasts.

Joe, of Julian’s Bait and Tackle in Atlantic Highlands, says it’s all about stripers right now. The diamond jig bite at Shrewsbury Rocks has been very good. The fish are spreading out now, and boaters just have to spend the time chasing them down. Porgies are still biting, he says, but the numbers are decreasing.

Bob, of Fisherman’s Den in Belmar, says the striper bite on Wednesday was off the charts. Most of the fish exceeded the 38-inch limit. From what Bob heard, the bass were on sand eels, and Ava 47’s with red or green tails were working well. Krocs caught fish, as well and 9-inch Mega Shads on jig heads. Bob says the surf is still underperforming, but showing steady improvement. Anglers using Ava 17’s with a teaser have been picking up schoolies from the beach. Flounder fishing, he says, has been very good in the Shark River, especially for boaters chumming.

Capt. Phil Sciortino, of the Tackle Box in Hazlet, says the bass fishing is excellent, both out front and in the back of Raritan Bay. Similar to the spring run, worm balls are getting the job done in the early days of November.

Now is the time to catch a trophy striped bass. There are plenty of boat fish in the 30-to-40-pound range being caught in Raritan Bay and off the Monmouth County beaches. Every method of catching big stripers is paying off. Keep in mind, any fish over 38-inches has to go back. Tautog fishing is also very good at the inlets and on the reefs. The weather looks good, so get out there.