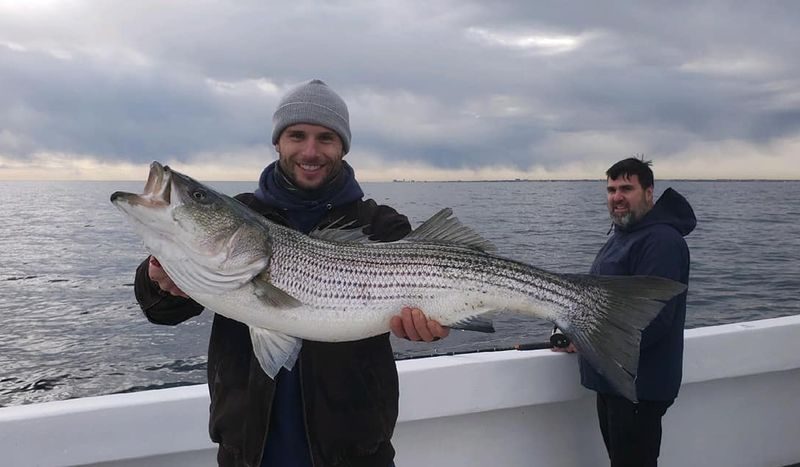 It was a good week on the water. The 5-fish tautog season got off to a good start, while the epic striper fishing shows no sign of slowing down. The boat anglers are getting the best of the bass bite by far, but things are looking up on the beaches. There were reports of schools of stripers in the surf at Long Branch, Belmar and Brick. More fish are being taken in the dark from the sand, fueled by sand eels. Furthermore, there is plenty of adult and peanut bunker around along with rain bait and hickory shad. He says anglers fishing bloodworms around the Bayshore are picking up some stripers. High winds on Monday made it tough for the party boats to sail out of Atlantic Highlands for the tautog opener, he says, but he did get reports from private boats that the fishing was decent.

Mel Martens, of Giglio’s Bait and Tackle in Sea Bright, says guys fishing in the dark are picking up keeper stripers. Tsunami Sand Eels, swim shads, Daiwa SP Minnows, and Cotton Cordell Red-Fins have all been working. Teasers are accounting for a lot of fish as well. Martens says there are still a lot of bass in the Shrewsbury and Navesink Rivers.

Francine, of Betty & Nick’s Bait and Tackle in Seaside Park, says the hickory shad are absolutely huge in the surf. She says Ava’s and epoxy jigs are picking bass off the beach. Most of the fish are on the short side, but there are a number of keepers in the mix. She, too, advised fishing before sunrise.

Capt. Pete Sykes, of Parker Pete’s Sportfishing, says the striper fishing is still going strong. On Wednesday, a 52-inch monster was caught in addition to plenty of keeper-size fish. He also says the tautog trip on Monday was successful. The charter consisted mostly of newer tautog anglers, but they still managed to put a bunch of keepers in the box. Sykes says he’s putting an offshore jumbo black sea bass trip together for Monday, Nov. 23, limited to fifteen people.

Jeff Nuel, of Reel Seat in Brielle, says the striper boat fishing is still excellent, but the fish have spread out. Jumbos, keepers, and shorts are being caught from Sandy Hook down to Seaside.  The surf bite, he says, is still a bit picky, but improving. He advised surfcasters to keep moving around until you find them. The bass are feeding on sand eels and imitations like an Ava are a good bet. Initial reports on the tautog opener have all been positive and Vafiadis says the tog are in relatively shallow water. He also reports some winter flounder being caught in the Manasquan River.

Capt. Matt Sosnowski, of the Norma-K III in Point Pleasant Beach, says the tautog trip on Monday was good, despite the breezy conditions. Some anglers, he says, made quick work and reached their limit early in the trip. The rest of the day was a steady pick with the pool going to an angler who caught a 7-pound tog. The anglers that put in the effort casting and working their jigs tipped with bait, did the best, he says. The water is still relatively warm, but as it cools down, he expects to see more fish coming over the rail.

Capt. Kenny Namowitz, of the Mimi VI in Point Pleasant Beach, says the tautog opener on Monday went well with plenty of keepers and an 8-pounder taking the prize pool. On Tuesday and Wednesday, they were on jumbo and keeper-sized stripers using jigs.

Gary, of Capt. Bill’s Landing in Point Pleasant Beach, says bluefin tuna are popping up pretty close to shore. He was among the lucky ones to land a bluefin about a week ago after it hit a rubber eel on the troll. He says Manasquan Ridge is holding tuna. Shifting to stripers, there are loads of bass around the 3-mile line. Tautog fishing has been decent on the reefs and at Manasquan Inlet. Captain Bill’s Landing is be holding its Second Annual Tautog Tournament this Saturday, with an estimated $5,000 in prize money. The tourney benefits New Jersey’s Artificial Reef Program. The Captain’s meeting is Friday at Captain Bill’s, at 6:30 p.m. For details, visit their Facebook page.

Frank, of Gabriel Tackle Co. in Brick, says the bass fishing for boat anglers remains solid with loads of bait around. He’s also getting better reports of stripers on the beach with some keepers mixed in. Tautog fishing has also been good at Point Pleasant Canal, Manasquan Inlet, and on the local reefs, and rockpiles.

Capt. Jay Richardella, of Side Job Charters in Belmar, says the striper fishing has been lights out. He says he’ll be staying with it for the next couple of weeks until he calls it a season. His charters have been catching stripers by trolling and jigging.

Pete Kupper, of Charlie’s Bait and Tackle in Normandy Beach, says the night bite at the beaches for stripers has been good with Ava’s, swim shads, and Daiwa SP Minnows. A couple of 40-inch stripers have been caught in the past week. Joining the bass in the surf are some big hickory shad, he says. Live eels have also been catching big stripers in the Point Pleasant Canal. He says anglers using bait from the beach are running into a lot of sand sharks lately, and the wise move is just to find another spot to get away from them. There’s still time to register for the Ninth Annual Surf Turkey Tournament over Thanksgiving Weekend.  The Berkeley Striper Club is also holding a striped bass tournament over the same weekend. The entry fee for both tournaments is $65. Kupper says to stop by the shop or call for details.

Grumpy’s Tackle in Seaside Park, says big hickory shad are in the surf. Surfcasters targeting bass are catching the shad on teasers. Sand eel imitations and small plugs are working for the stripers. He says first light is a good time to be fishing.

Mike Gleason, of TAK Waterman, says some bass pushed into the surf on Wednesday afternoon and were feeding on peanuts and rain bait. There were keepers mixed in and a couple of doubleheaders for those using teasers. Up until then, Gleason says there had been a steady pick of schoolies early in the morning. He says the big fish are still out front and added that the body of stripers that’s been around for the last couple of weeks is just incredible. The surf in Ocean Grove and Bradley Beach is giving up more bass on swim shads, sand eels imitations, and swimming plugs. There have also been a lot of big hickory shad caught, mostly on teasers.

Bob Matthews, of Fisherman’s Den in Belmar, says the party boats are reporting good catches of tautog on the inshore fishing grounds. Windy conditions made for a less than ideal opening day, but those that made the trip did well. The striper boats out of the marina, he says, continue to catch big fish, mostly on jigs. Matthews says he’s seeing an improvement in the surf fishing with good reports from Sandy Hook, down to Dover. For a change, he says, the bite has been better after daybreak on Ava 27s with green tails, and Tsunami Sand Eels.  Matthews says a teaser is a must.

Capt. Phil Sciortino, of the Tackle Box in Hazlet, says the striper bite is strong out front on the beaches, but also in the back bay. The bass are feeding on sand eels and trolling a tube rig has been effective. Jigs, live eels, and other sand eel imitations are working as well.  Sciortino says people fishing the Bayshore area are picking up some stripers on bloodworms. High winds on Monday made it tough for the party boats to get out of Atlantic Highlands for the tautog opener, but he did get reports from private boats who say the fishing was decent.

Steve, of Julian’s Bait and Tackle in Atlantic Highlands, says the striper boats out front are still doing great jigging and with live eels. Tautog fishing was good earlier in the week as long as you were on the right spot. Steve says he fished on Tuesday and was plagued by dogfish.

Vinny, of the Fisherman’s Den in Point Pleasant Beach, says the bass bite on the beaches is improving. Shorts are dominating the action, hitting swim shads and Tsunami Sand Eels.

Stripers continue to bite offshore and it looks like more are making their way to the beaches. Party and charter boats are having a great fall for stripers and tautog, so now is the time to book a trip. Another option is to get up early and head to the beach. Stripers are in the surf at first light hitting sand eel imitations, swim shads, Daiwa SP Minnows, and other small swimming plugs.