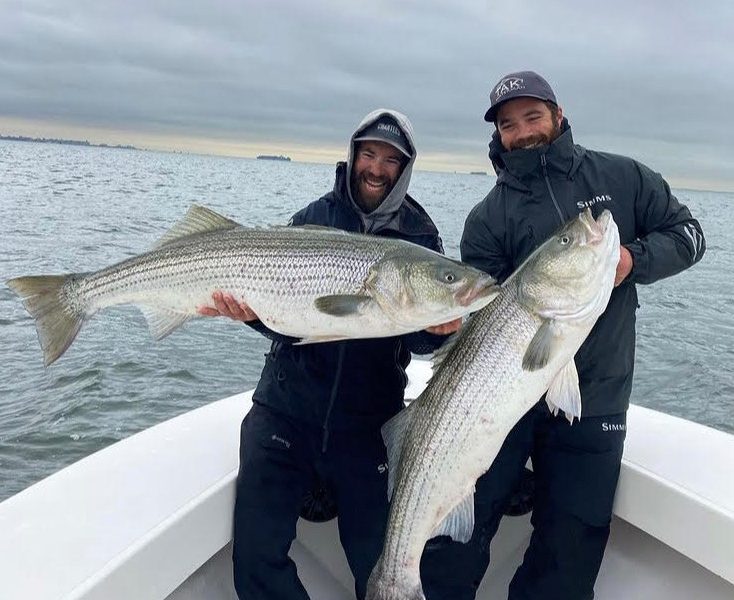 Boaters are having a blast with the fall bass run.  Jumbo stripers continue to come over the rails of party, charter, and private boats. Umbrella tube rigs, Ava 27s and 47s, and other slim profile jigs are all working. There’s an incredible amount of bunker around, but the bass are favoring sand eels. It’s a different story for surfcasters. Finding stripers in the suds has been a struggle. While there is a ridiculous amount of bait along the beach, the bass choose to remain offshore. Some short bass are being caught, mostly at night, and there have been a couple of big fish taken from the sand in Ocean County.

Rick Hebert, of Tackle World in Rochelle Park, says he got out on Saturday and trolled several big bass in Raritan Bay. He says there were some fish swirling on top as well. Switching to bluefin tuna, there are reports of fish relatively close to shore. Tautog fishing has been good, and he says a lot of their customers are stocking up for the 5-fish tog season starting Monday.

Mike Pinto, of Giglio’s Bait and Tackle in Sea Bright, says the fishing is still slow in the surf, but he did get reports of stripers on North Beach at Sandy Hook. He also heard of a 30-pounder taken on a pencil popper in the middle of the day earlier this week. There are some nice fish in the rivers and Pinto says Gene Amato of the Asbury Park Fishing Club landed a 25-pound bass earlier this week.

Mike Gleason, of TAK Waterman, says there are still plenty of big stripers around hitting Savage Gear and Hogy Sand Eels. Doc Spooks and Madd Mantis plugs are also providing topwater action. Gleason says there are some bass on the beach, but you better get there at first light. There were also reports of bluefin tuna pretty close to shore. However, it looks like the yellowfin tuna bonanza at the Triple Wrecks has finally come to an end. There have been acres and acres of bunker off Asbury Park, Ocean Grove, and Bradley Beach all week. Unfortunately, there are no bass on them. Nonetheless, there have been some shorts around hitting Kettle Creeks and poppers.

Capt. Pete Sykes, of Parker Pete’s Sportfishing, says the striper fishing is phenomenal, with an increase of keeper fish coming over the rail. Previous weeks saw a lot of fish well over the 38-inch limit, which Capt. Sykes and his crew have been tagging and releasing. The bite has been mainly in the morning, and his two boats have been leaving before sunrise. The action usually comes to an end around 10 a.m. There were a mix of stripers and gator blues in the 10-to-15-pound on Wednesday.

John Vafiadis, of Reel Seat in Brielle, says he and his son, Corey, and Darryl Zarichak of the Shark River Surf Anglers had a great day of striper fishing last Friday on Tsunami and Bill Hurley Sand Eels. They caught and released about 20 bass, and may have encountered a bluefin tuna when line disappeared from a reel way too fast for any striper. By the time they gave chase, the mystery fish was gone. Vafiadis says the stripers have spread out and boats heading south out of the Manasquan Inlet are now finding them. He also reported big bluefish in the mix.

Capt. Matt Sosnowski, of the Norma-K III in Point Pleasant Beach, says he was finding stripers and blues on the first couple of drifts on Tuesday. He says they will be striped bass fishing through Sunday, then switch to blackfish on Monday.

Capt. Kenny Namowitz, of the Mimi VI in Point Pleasant Beach, says the fishing is as good as it was last week, which was terrific. He says there are plenty of stripers around, from slot fish to 40-pounders. The bottom fishing has been good as well with tautog, black sea bass, and all the porgies you want.

A jumbo bass caught by a happy member of the Schuyler Tuna Fishing Club aboard the Mimi-VI.

Owen, of Capt. Bill’s Landing in Point Pleasant Beach, says jigging for bass north of Manasquan Inlet has been very good at the 3-mile line. There are also reports of bluefin tuna popping up at Manasquan Ridge. Tautog fishing is pretty good at Manasquan Inlet, but he said it can be hit or miss.

Frank Ciacolone, of Gabriel Tackle Co. in Brick, says this past week saw stripers caught north of the Manasquan Inlet off Long Branch, all the way south to the Sea Girt Reef.  Trolling and jigging have been working well and he recommends starting to the north before heading south. He also heard reports of bass on the beach, but it’s far from gangbusters. There are still some stripers in the Manasquan River around the bridges. The fish have been caught at night on Kettle Creeks and SP Minnows.

[Video: How to Rig the SP Minnow for Big Bass]

Pete Kupper, of Charlie’s Bait and Tackle in Normandy Beach, says the conditions and weather were perfect over the weekend. There is an abundance of bait including spearing, sand eel, and adult and peanut bunker. However, there were no bass on the bait. The fish seem stuck offshore feeding on sand eels. Pete says he’s hoping the change in the weather will bring them closer. Registration is still open for the 9th Annual Surf Turkey Tournament held over the Thanksgiving weekend. All money from the entry fees goes to the cash prizes.

Frankie Z, of Grumpy’s Tackle in Seaside Park, says the striper bite has been fair off the beach at first light on Avas with dark tails, SP Minnows, and Bombers. He says boats trolling offshore are having better luck, mostly with tube rigs.

Francine, of Betty & Nick’s Bait and Tackle in Seaside Park, says things have been a little quiet there this week, but a 45-inch bass was caught off the sand there last Thursday. Smaller stripers are hitting plugs and shads in the dark, and tautog fishing from the jetties is still very good.

Bob Matthews, of Fisherman’s Den in Belmar, says the balmy weekend weather got folks out and fishing. He says the number of stripers caught was down from the previous week, but there are still plenty of bass around. Jigging with Avas close to the 3-mile line paid off, as did trolling tube rigs. The bunker spoon bite died, as the bass are keyed on sand eels. He says surf fishing remains on the slow side, but bass and blues made an appearance at Asbury Park earlier in the week. Winter flounder fishing in the Shark River remains good, with fish up to 3-pounds.

Capt. Phil Sciortino, of the Tackle Box in Hazlet, says stripers are being caught from the tip of Sandy Hook over to Coney Island. Tube rigs, Savage Gear Sand Eels and Avas are all working. Sciortino says there are still stripers in the Shrewsbury and Navesink Rivers. The tautog fishing on the rock piles has been good, but the black sea bass fishing is just so-so.

Steve, of Julian’s Bait and Tackle in Atlantic Highlands, says the bass fishing has been wild. The bite has all been on sand eels and while most shops are struggling to keep tube rigs in stock, Julian’s has been making their own. Steve says the tautog fishing is good, but the local spots were getting a lot of pressure. Boats have been heading south to the Sea Girt Reef to find more and bigger fish.

Stripers remain the top draw this week, with the big fish spreading out down the coast. Boat anglers using tube rigs and sand eel imitations are having the most luck. More keeper bass are in the mix along with some gator blues. Hopefully, the cooler weather in the forecast will spark the surf bite. Tautog fishing will also get more attention starting on Monday, as the 5-fish season opens.