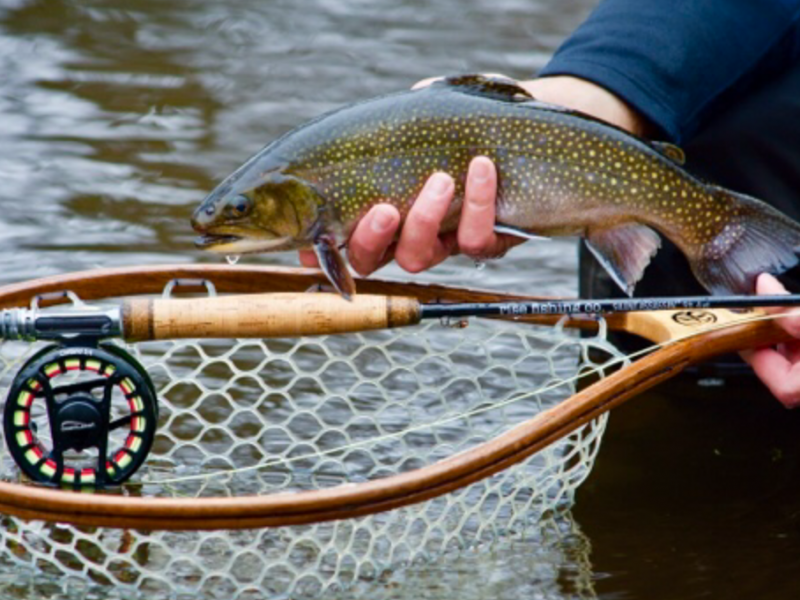 While slim and few and far between, there are just enough reports of striped bass to make it almost worth your while to make a few casts onto your favorite beach or perhaps at the mouth of a river that is home to a herring run. Far more reliable are freshwater options with trout leading the charge as shoreline water temperatures cool.

Whether we like it or not, over-the-moon fishing types are well known for our obsession. Odds are that family, friends and most everyone you know can’t help themselves as they skew the conversation with you towards, what else – fishing! So was the case recently with my buddy Dave Flaherty who while lying on the dentist’s chair soon found himself in a discussion about striped bass. This dentist knew his stuff and commented that from his office over-looking Fisherman’s Beach in Swampscott last Friday he noticed a lone kayaker hooking up – and the fish were good ones! While you wouldn’t want to wager much about having a striper notice your swimmer in the surf in late November, you never know!

Pete from Belsan Bait and Tackle in Scituate said that he’s selling a lot of shiners for largemouth bass fishermen who are targeting the no-name bog ponds which dot the South Shore. Fill up on bait and I’m sure Pete will tip you off on his favorites. Local reservoirs that are open to the public are fishing well for a host of freshwater species as well. Plymouth though the Cape remains the draw for trout with Peters Pond and Long Pond getting a lot of love.

Lisa from Fore River Fishing Tackle in Quincy is still carrying seaworms for those searching for smelt among the Hull Piers. Some have also put the worms to good use for schoolies among local rivers that support herring runs. Ponkapoag Pond has been producing bass and pickerel while the tip of the week for trout is Jamaica Pond as well as Lake Massapoag. Mackerel remain the most consistent saltwater quarry with Nut Island Pier the premier spot. A long-term favorite from Pete Santini of Fishing FINatics in Everett for pickerel and bass is Wrights Pond in Medford. Other nearby options are Ell Pond as well as Swains and Towners in Melrose and the Golden Hills ponds. Local anglers have also been making the trip out to Wachusett Reservoir where crawlers floated off the bottom are resulting in rainbows of up to 4 pounds! The class of rainbows this year in the Chu’ is exceptional.

Regarding that blue-ribbon reservoir, I know that when Eddie of B&A in West Boylston is not answering the phone than the interest in Wachusett is high. Sub-freezing nights have dropped water temperatures dramatically making the shorelines prime for lakers and rainbows. Both the bows and the forktails don’t look as if they’ve missed many meals lately. With ideal inshore water temperatures there almost isn’t any one hot-spot since most salmonoids in the reservoir remain on the move. More salmon have moved into both the Quinapoxet and Stillwater Rivers with the former holding rainbows and the latter lakers occasionally. Rod from Flagg’s in Orange said that with rivers holding sway over most anglers, the heavily stocked Lake Mattawa has hardly anyone fishing it; the same could be said for Lake Rohunta which is a warm water species favorite and is located right behind the shop. The Spectacle Ponds are best local bets for crappie. For pike, best picks are The Oxbow, Turner Falls and Quabog Pond. While you’re at Quabog, take along some trout gear, it’s “sister” waterbody – South Pond – due to its landlocked alewive forage base is noteworthy for big brown trout.

David from Merrimack Sports said that he’s still getting good reports of mixed species of trout form Round Pond and Plugs Pond. While in Haverhill, Millvale Pond is one of the better local spots for bass while Big Island Pond, which is just over the border is the local pick for crappie. Sam from Tomo’s Tackle in Salem said that there are random mackerel bites in Beverly Harbor. The other option in the salt is tommycod, smelt and silver hake along the Boston Harbor Reserve Channel in South Boston. For freshwater, the focus has been casting small Kastmasters for trout in Pleasant Pond and Sluice Pond.

Want to get in on the bite? Find an OTW-approved Charter Fishing Captain for Massachusetts

Regardless about how you take your trout, whether it is while floating Power Bait in Jamaica Pond or roll-casting a streamer at the Y Pool in the Swift River, these cold water critters are a best bet to remain in the game. Mackerel off the Nut Island Pier, as well as the Beverly Pier, are tops if you can’t kick the saltwater addiction. Of course there are always those who yearn to take just one more cast into the sea and for them there just might be a striper willing to inhale a plug.