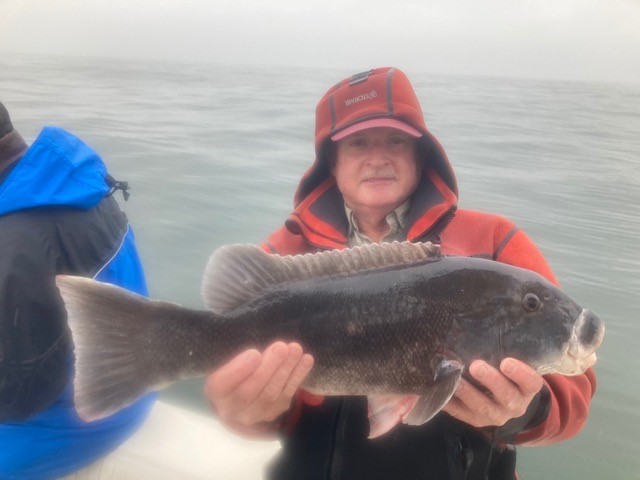 Recent rain has energized many rivers from blue-ribbon, limestone-based beauties out west, to more gritty Greater Boston rivers which while lacking in aesthetics, are no less fishy. Not all is lost for those who still crave salt with haddock, pollock, smelt, and tautog all drawing interest.

There was a time when anglers who wanted to keep busy during the offseason simply switched gears from stripers and blues to fall favorites such as frostfish, flounder, smelt, and cod. Right now, interest in tautog is very high, and shops are getting requests to carry green crabs. To satisfy patrons, Pete from Belsan Bait & Tackle in Scituate has been trapping green crabs for over a month now. A 10-pound tautog is now leading the state saltwater derby. While we’ve always had some tog in these parts, it’s possible a warming ocean is resulting in a shift with more tog taking up residence up north. Pete says that much of the irregular bottom between Green Harbor and Cohassett holds tautog with the bigger fish beginning to drift off to 50-to-60 feet of water. now that water temperatures are beginning to drop into the lower 50s. Haddock are still holding within 10 miles of the shoreline also. Finding mackerel is easy, but anglers live lining them for stripers are not reporting much luck. However, surfcasters working beaches are still catching schoolies. With many turning to freshwater, their destinations have been the trout ponds of Plymouth and the Cape. Nightcrawlers are just the thing for the rainbows while Rapala F7s are the choice for night shift brown trout. Capt. Colby and the Little Sister crew wrapped up a spectacular tog season with easy limits today of quality fish up to 8-pounds.

I did not expect Lisa from Fore River Bait Fishing Tackle to talk about tautog when we spoke, but she also has been getting requests for green crabs. Most of the tog action has been from Toddy Rocks to the area behind the Hull High School. The latest hotspot for smelt is Fore River. Efforts are ongoing to improve upriver travel there for anadromous species such as river herring and smelt, and it seems both species have taken notice. Freshwater is increasingly becoming the draw, with Whitman’s Pond the winner for warm water species, while Houghton’s has been hot for freshly stocked trout. Pete Santini of Fishing FINatics in Everett says anglers have been catching steady numbers of tog from the pier by the Amelia Earhart Dam and at the piers throughout Boston’s inner harbor. As to specifics, he mentioned the wharves of South Boston and East Boston. Finding a lit section of those piers at night is the key to catching a few smelt as well. Now that stripers are few and far between, smelt are more likely to feed without fear of getting eaten. For freshwater, rainbow trout, largemouth bass, and crappie are cooperating at Horn Pond in Woburn, as well as some impressive brown trout off the beach of Walden Pond. Capt. Sam of Boston Saltwater often keeps his boat in the water until December for the warmer weather we experienced during the last week. During a recent trip inside of the Stellwagen Bank shipping lane, he put a 3-person crew into limits of haddock in only 2.5-hours. Arcadian redfish and whiting were also caught.

David from Merrimack Sports isn’t sure whether the striped bass being caught near the mouth of the Merrimack are holdovers or not. Bait continues to be the best bet, with clams being the best option. Options in the Merrimack do not stop there, and a unique fish to consider is the white catfish. The intersection of the Spicket and Shawsheen tributaries with the Merrimack are good spots for white cats, as is the Riverside Park area in Haverhill. Shiners fished near the bottom are usually a better bait than worms. Pike are being caught by the Covanta Power Plant in Haverhill. The shop is carrying perfect pike sized bait in anticipation of demand. For local trout, the best places are Forest Lake, Baldpate Pond, and Stiles Pond. Regarding groundfish, the word from Capt. Andy of Adventure & Catch Charters out of Great Bay is that the pollock have moved inshore and it is not unusual to catch two double-digit “Boston bluefish” at a time.

Recent rains have been a tonic for many rivers such as the Swift, Miller, Deerfield, Stillwater, and Quinapoxet. Most anglers who are fishing these gems are fly fishing, and above all, catch-and-releasing. Whether the subject was wild brook trout in the Swift or salmon in the Quinapoxet of Stillwater, anglers are marveling at these fish and ensuring that these native fish propagate. Eddie of B&A Bait and Tackle Co. in West Boylston says the rainbows in the 3-pound bracket have been caught in the Quinapoxet as well as Gates 6,8 and 35 in the main reservoir. Of course, it is November, which means that lakers are in close, and anglers walking Wachusett and casting on the fly are having no problem getting feisty forktails. Rod from Flagg’s Fly and Tackle in Orange told me that most anglers are targeting the aforementioned rivers for trout leaving the heavily stocked Lake Mattawa a virtual ghost town. Rod is a master fly tier and his stuff is in so much demand that most times while in the shop, you’ll see him tying away. In fact, one of his gems was recently responsible for an 18-pound Deerfield River brown trout. For Rod’s best bet for a big brown he suggests the section of the Deerfield near the Vermont border.

Rockpiles, mussel beds, and wrecks from Green Harbor through Hull seem to have a strange spike in tautog. In fact some anglers are nudging local shops into carrying green crabs. Additionally on the South Shore, there are random schoolie blitzes from the Three Bays to Scituate. Haddock remain within 10-miles of the shoreline and while you’re out there don’t be surprised if you see tuna. The Merrimack is still holding schoolies while a shiner on the bottom near upstream tributaries might catch you a white catfish. For freshwater, consider the Swift or Stillwater Rivers, just make sure you practice catch and release for those native salmon. But not all rivers have to be pristine to be productive, the Charles and Mystic Rivers might not be picturesque, but if you find the herring fry you’ll find a host of predators from white perch, to black bass, to crappie.