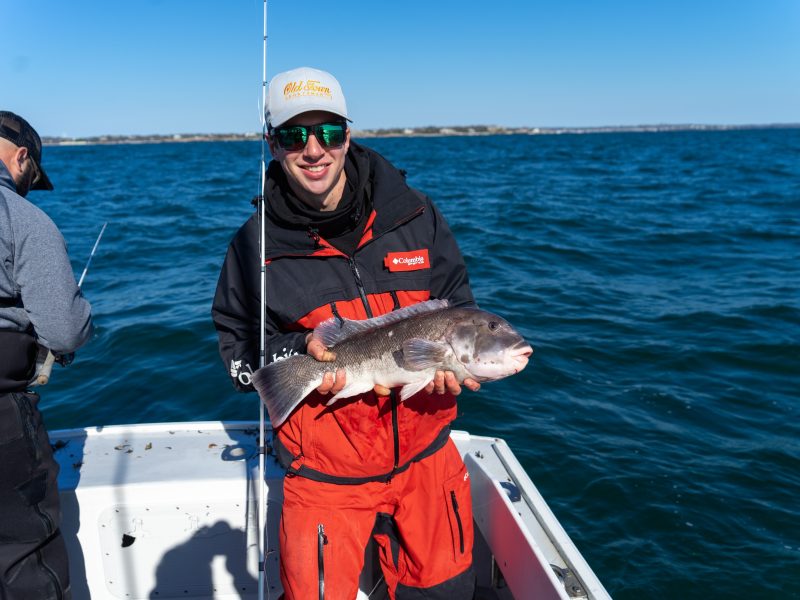 The saltwater fishing is winding down, aided by quickly cooling water temperatures.

I was surprised to hear of false albacore being caught as late as Saturday off Falmouth. Evan at Eastman’s Sport and Tackle hasn’t heard anything since, however. Yet, I called it a wrap on the albie season last Thursday, and was wrong, so it still might be possible for someone to nab a rare November false albacore.

Last Friday, in an even rarer October snowstorm, I found hungry schoolie stripers in a South Side backwater. If I’d only driven north, instead of south, I might have encountered larger fish.  Bass to 30 pounds were reportedly taken in the Canal last Friday, but it’s been predominantly schoolies since reported the crew at Red Top.

There’s plenty of schoolies swimming around the Cape. The most action is being found in the backwaters, but beachfronts are holding fish as well. The South Side bays, Cape Cod Bay beaches, and Canal are the most likely places to find feeding bass. Many fish are feeding on the surface during the day, attracting flocks of birds, and more are being caught by fishing near the bottom with small soft plastics. As is always the case with striper fishing, nighttime or early mornings are best.

Tog fishing remains good with easy limits for fishermen working structure along the Elizabeth Islands and in lower Buzzards Bay. According to Evan at Eastman’s, over the weekend, a fishermen out tog fishing came across a school of bunker, snagged a few, and live-lined them for a few too-big-to-keep stripers, proving that it’s not just little bass hanging around the Cape right now.

The stripers seem to have cleared out from the Monomoy rips, reports Captain John Clothier of Fish Chatham Charters. It seems like a lot of the life on the backside of the Cape is starting to clear out. John reported slower tuna fishing this week, though he did hear of some small fish at the Regal Sword. He’ll be tuna fishing over the weekend, but will begin running cod and haddock trips as well, as he said the groundfishing has been excellent, and is likely to stay that way.

Freshwater fishing is very good.  Trout fishing is automatic, both with bait and artificials.  Spoons, jigs and stickbaits are all catching rainbows and some impressive holdover browns. Largemouth bass are biting well as they responding to the falling water temperatures by feeding heavily. I’ve always liked lipless crankbaits this time of year, but jerkbaits, jigs, and swimbaits will catch as well.

The marine forecast this weekend looks like a gift with flat seas and calm winds. Many fishermen will be taking a last look for tuna, and it’s also perfect conditions for tog.

From shore, there’s still good fishing for stripers. Scale down the tackle and switch to single or barbless hooks because the vast majority of fish will be undersized. Soft plastics and small plugs will work well, and a teaser fished ahead of a plug can be a good bet as the late-season bass focus on smaller baitfish.