Blackfishing has been great for those that have found their way out, and there is still no shortage of topwater bass, bluefish and hardtail action.

The Frances Fleet in Point Judith has put together some very solid trips whenever the weather has allowed. The scup and sea bass bite has remained very consistent, while the cod are starting to show up with a bit more regularity. They’ve been dialing in the scup and sea bass then making moves to the cod water, which has generally been a good move. The cod waters are seeing more, and larger, fish on each trip. Cod in the 10-12-pound range have started to become more commonplace, and mid to upper-teen fish are showing up as well. Be sure to book before it’s too late!

Dave, at Ocean State Tackle in Providence, told me that despite some wind, most are reporting one of the best tautog seasons in 20 years. The Newport/Jamestown area has been rock solid for white chins, but good reports are coming from throughout the state. The Seekonk River has woken up in a big way over the past few days with tons of blitzing striped bass to the mid-30-inch class. The beaches and breachways are also seeing some nice bass blitzes during the day, with some bigger fish moving in after dark. Some albies can still be found throughout Rhode Island as well, although its been a bit tougher after the recent weather. 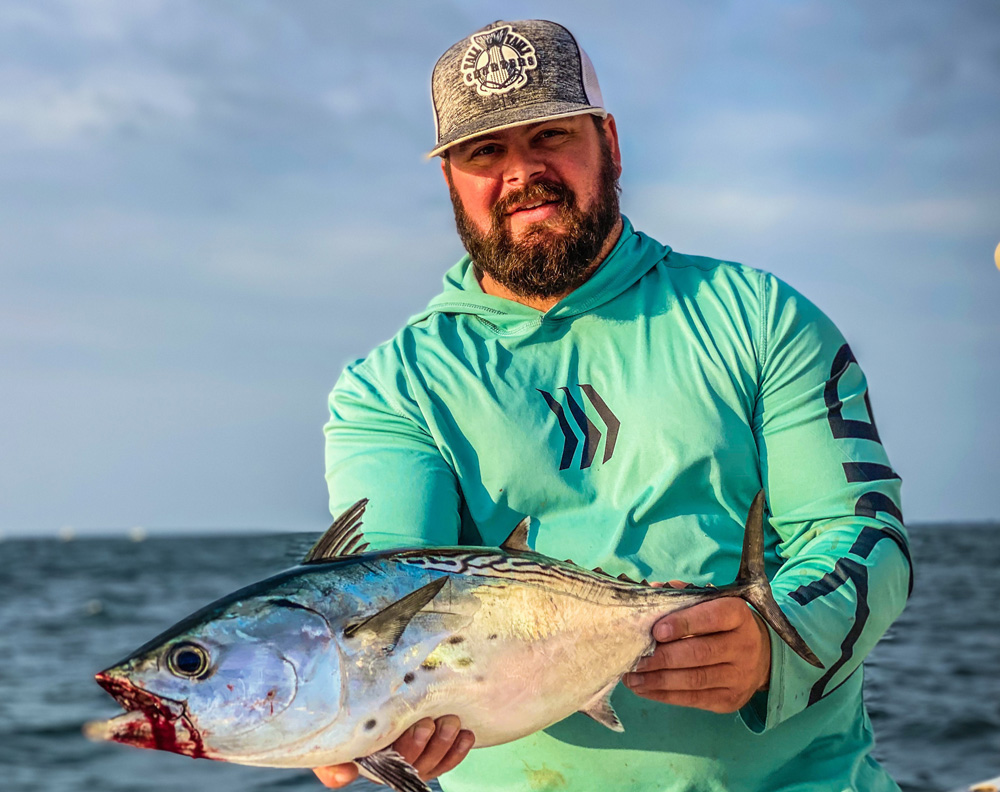 Captain Connor, at Tall Tailz Charters in Newport, told me that this week was probably one of the best fall fishing weeks of the season thus far. Most trips have seen some massive top water feeds of albies, bass, blues, mackerel, and hickory shad. The “fall run fishing” is officially upon us. There are still some large striped bass in the mix as well, with multiple fish in the 30-40-pound class showing up this week. Williamson Gomame and Gomoku jigs continue to be a big producer while small white and pink Ron-z’s are also working well. For the bottom anglers, tautog fishing has been incredible with tons of quality keepers in relatively shallow water. They are also seeing plenty of interesting by-catches as well, with cod, triggers, and a variety of different puffer fish in the mix. Call to book asap, while there’s still some openings and the fishing is red hot!

Captain Kelly, of C-Devil II Sportfishing, reports that Mother Nature continues to test their patience with the wind, but they’ve been able to put together a few great trips. The striped bass action has been very good, and while the cow fish have been a bit tougher to find, they are finding plenty of action with fish around the slot range. The north end rip of Block Island has been a strong producer, with Gag’s Whip It Eels producing well. The sea bass continue to be an old reliable cooler filler, while the tautog season has started off with a bang! They are finding some big white chins in relatively shallow water on both jigs and rigs. There have actually been some nice cod in the mix as well, even inshore, which is always a nice bonus. Be sure to check the live calendar for open fall dates through December 15th!

Andrew, at Fishin Factory III in Middletown, told me that the Waterford/New London area still has a good bass bite, with loads of school-sized fish and fish to 30-pounds hitting topwater plugs. The false albacore remain scarce in the sound, but a few have started to show up. Rhode Island is still holding a larger mass of albies, but hopefully they are on their way in soon! There are still plenty of Spanish mackerel to take on light tackle, along with school bass and tailor bluefish. All three species can be found just about anywhere from the Connecticut River to the Thames River. The tautog opener has been a good one for any of those that have found a window or braved the conditions. All of the shallow rockpiles are holding good fish, so let’s hope the weather starts to cooperate a bit more. Some anglers are still reporting some hickory shad in the river, but the carp and catfish bite has really taken over this week. With the water levels rising, we should start seeing a better pike bite in the river as soon as it cleans up.

Mike Roy, of Reel Cast Charters, told me that the fall fishing is in full swing, with a wide variety of action. Bluefish, stripers and a few false albacore can be found on topwater offerings or the fly on most days. The bigger bass are mainly coming on live baits, but you can still find some cows on topwater offerings. The bottom fishing remains strong with plenty of sea bass and a very strong blackfish bite since the opener.

Heather, from Black Hawk Sportfishing, reports some great fishing whenever Mother Nature has cooperated. Jumbo sea bass are still prevalent, along with some nice cod, and even a few winter flounder in the mix. They hope the weather improves a bit and plan to get some blackfish trips in soon, so be sure to check their website for updates and scheduling.

Joe, at Diorio Guide Service, told me that the fall run is in full swing. He is finding good numbers of bass locally, despite the wind. Most of these fish have been willing to hit topwater plugs and will take live bunker if all else fails. There are still plenty of large bluefish in the mix as well! He has also been able to dial in the false albacore bite this week, with good numbers of catches when the weather has allowed.

Max at Fisherman’s World in Norwalk reports that the scup and sea bass action has been good at a variety of depths, so be willing to move around. Blackfish catches have been good whenever the weather has allowed, which has been the determining factor lately. Albies are still popping up here and there, but there isn’t much of a pattern, you really need to just get lucky. Bass and blues continue to crush diamond jigs at 11B and 28C with some nice weakfish in the mix as well. Most of the bass are 15 pounds and under with blues up to almost the same size as well.

Chris Elser of Elser Guide Service sounds like a broken record but the wind cut his trips to 2 days out this week and it was tough to locate the albies due to chop. Nice size blues are abundant near shore and out in the mid deeper rips and schoolie bass are all around the area. There are tons of adult bunker schools for this time of the year, but sadly, no fish on most….the big blues and bass are dialed in on peanuts and anchovies for some reason. If the wind could tone it down next week we will find more local albies for sure!

Let’s hope we get some decent anchoring weather towards the latter part of the weekend, as tautog action has been very strong in both states. There are still plenty of sea bass and scup in the mix as well to help keep coolers full. Bass, blues and albies can all also be found blitzing on most days, and the larger bass don’t seem to have completely left the area just yet.