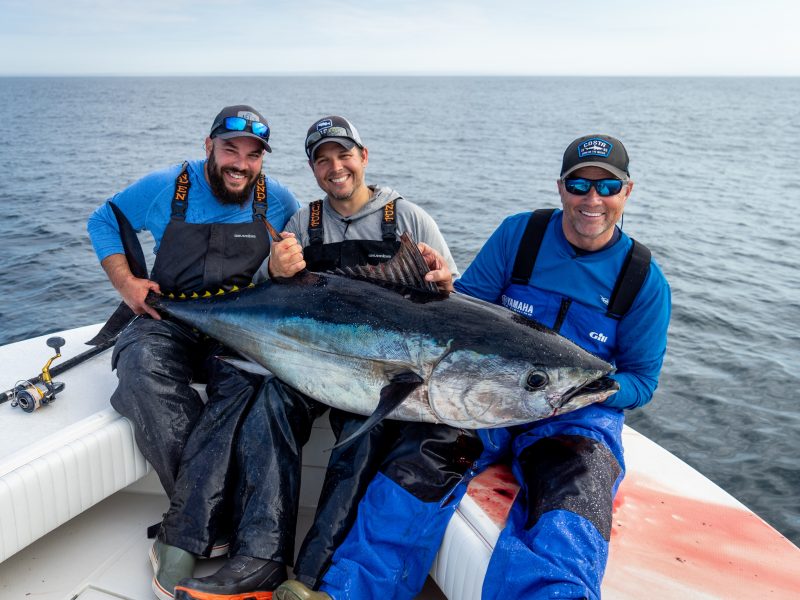 Above: (Left to Right) Anthony DeiCicchi, Jimmy Fee, and Chris Megan with a bluefin tuna taken on spinning tackle off the Outer Cape last Thursday.

Perhaps it’s the lingering albie schools in Falmouth, but it doesn’t feel like the end of October. At least it didn’t until Thursday, when the Cape was drenched with what, on Sunday, will qualify as cold November rain.

On Tuesday, I spent my lunch break watching several schools of albies tear up the water off Falmouth’s South Side, while a handful of boats chased them around. Jonah Olsen was one of them, and he later texted that he landed three and lost two more. As of Thursday morning, the albies were still being spotted in Vineyard Sound.

But many of these late albies have been picky reported Evan at Eastman’s Sport and Tackle. He’d heard a report of one fishermen who tried 10 different lure and color combinations to no avail this week. Still, there are plenty of days when you don’t get enough casts to breaking fish to even try three different lures. At the end of October, to be casting at breaking albies is a victory unto itself.

Albies are still roaming around the Vineyard, and shore fishermen are catching, along with the boaters.

Bigger news on the Vineyard was that of the striper fishing. Julian from Larry’s Tackle said the bass fishing has been good, with a considerable number of “over-slot” stripers being caught around the island, and schoolies abound. Fishing fresh squid on the south side of the island has been a productive tactic lately, and based on the squid fishing reports from Edgartown Harbor, getting fresh bait hasn’t been a problem. Fishermen are even jigging some squid during the day, Julian reported.

It’s been mostly schoolies on the Cape, but there seem to be plenty of them, from the Canal to the South Side, and out to the Cape Cod Bay and backside beaches. Some of the bigger fish being reported have been coming from backwaters, where, according to Nathan at Red Top, fishermen have found bass in excess of 40 inches in just a couple feet of water. Nathan had even heard of a jumbo blue taken deep in a Cape Cod estuary.

OTW’s Andrew Burke encountered a school of hungry blues on a bayside beach down Cape last weekend. He caught a couple big ones on a pencil, and lost what he suspects was blue that weighed in the mid- to high-teens.

In the Canal, green-mack-colored paddletails have been the top bait for the schoolies, slots, and occasional over-slot stripers, Nathan said. The Fish Lab Soft Mack has been especially productive, Nathan said.

Monomoy Rips are still holding slot-limit stripers and schoolies, reported Captain John Clothier of Fish Chatham Charters. John’s made a couple striper pit stops on his way to and from the tuna grounds. John caught his biggest tuna of the season this week, a 120-incher estimated at more than 1,000 pounds. Tuna fishing is still good, with a mix of giant and recreational size fish being caught.

Live bait seemed to be the best bet this week, but late last week, fishermen were connecting on spinning tackle, chasing around schools of surface-smashing bluefin. OTW’s Anthony DeiCicchi connected with a fish in the mid-60-inch range last week while filming an episode of OTW TV to air this winter.

Anthony has also been catching on the freshwater side, heading out after dark and fishing wakebaits for big largemouth bass. The largemouth bass fishing is very good right now, as the fish are taking a variety of lures in the optimal water temperatures. Trout fishing is very good as well. Fish from the fall stocking are providing fast action alongside the fish that heldover from the spring stockings.  It’s prime time to catch a big brown trout, as they will be moving shallow to feed and attempt to spawn over the next couple weeks.

Tog fishing is still very good, but you’ll need to weed though a good number of throwbacks reported Evan at Eastman’s. The sea bass have moved off the nearshore wrecks, as they migrate to the offshore structures where they spend the winter, which means fewer bait-stealers to whittle away at your green crab supplies.

Wind and rain will wrap up our October, so it’s looking like a surfcasting or freshwater weekend. Hiding from the wind in a backwater and tossing small topwaters or soft plastics should be a sure bet for schoolie bass and maybe something bigger. In freshwater, bad weather always puts the bass and trout in a feeding mood.

We can probably bid farewell to the false albacore right now, but when the wind lays down next week, there will still be stripers, tuna, and tog to catch in the saltwater if you’re not quite ready to switch to the sweetwater just yet.