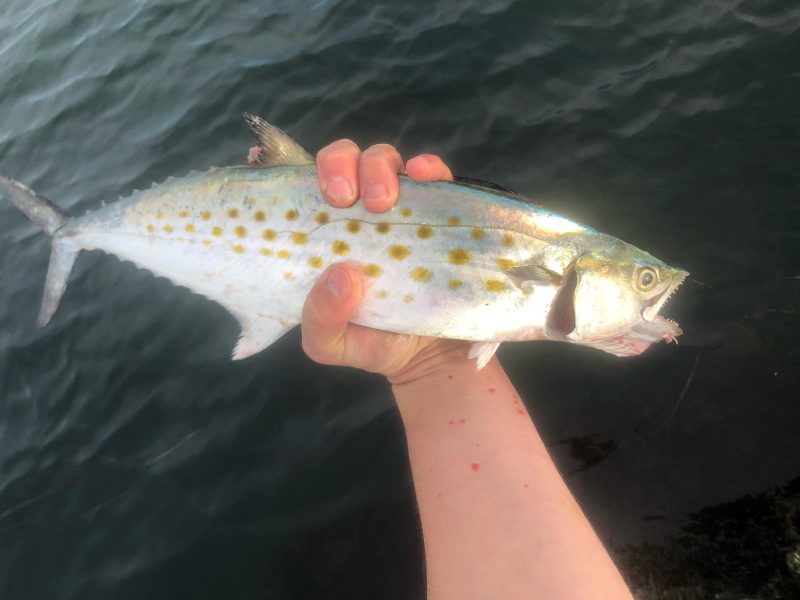 Hardtails are starting to spread out through Rhode Island but haven’t made their full entrance into Connecticut waters just yet. With a little luck, we should see bonito and albies spread out nicely over the next week or so. Striped bass can still be found in the usual late summer haunts, and bluefish remain plentiful. The fluke bite is dying out, but you can still fill coolers with scup and sea bass.

Andrew, at Fishin Factory III in Middletown, had been hearing of a nice push of false albacore and bonito between Point Judith and Watch Hill earlier in the week, but reports have quieted over the past few days. Hopefully, the east blow over the weekend doesn’t hurt things too much and more show up. There are some large schools of Spanish mackerel throughout eastern CT, and a random albie or bonito report popping up here and there as well. Striper reports have been up and down. It has been slow overall, but a few anglers pounding the eastern sound reefs and rockpiles are finding some quality bass on topwater plugs. Sea bass action remains strong in the eastern sound, and a few nice fluke are popping up between Black Point and Hatchets. Scup fishing remains excellent, as does the snapper bluefishing and blue crabbing in the river tribs.

Mike Roy, of Reel Cast Charters, told me that he has started to shift his focus to more light tackle casting action for bass and bluefish. There are big schools of peanut bunker and silversides throughout the sound, and they are starting to get worked hard by bass and blues. He hasn’t found any hardtails to speak of just yet, but they should be right around the corner. Water temperatures are starting to drop a bit and the bait amounts are on the rise, so the fish have clearly started to become more aggressive.

Heather, from Black Hawk Sportfishing, reported continued excellent fishing again this week. The bonus season has started for the porgies and sea bass, and many customers have been getting their limits. They have also had some nice fluke, triggerfish and a few cod in the mix this week. Their after work trips are coming to and end this week, but they are continuing to sail for bottom fish daily. Spots are filling fast, so be sure to book soon.

Captain Chris, of Elser Guide Service, told me that the weather has been a bit of an issue this week, but he managed to get out a few times this week and found bluefish from snapper size to 10-pounds. The striped bass bite has been a bit more hit or miss, but he is still finding at least a few fish to 30-pounds on the tube and worm. His fly and light-tackle customers have been having a blast chasing bluefish and Spanish Mackerel from New Haven to Norwalk. Chris also expects some bonito to show up in that area this week, and based on reports from out east, the albies shouldn’t be far behind.

Max at Fisherman’s World in Norwalk said that the Spanish mackerel have pushed into local waters and catches have been strong. There have been a few random bonito reports to the west, but they are widely scattered. There are school bass and some slot sized fish along the islands and most of the inshore structure. Per usual, the best bites have been occurring at times of low light or after dark. Some big bluefish are still falling for diamond jigs at 11B, while light tackle anglers have as many small bluefish as they can handle around the islands. The fluke bite has died out, but scup fishing is still on fire and the sea bass bite has been steady.

The Frances Fleet in Point Judith reports that the full-day trips have seen good catches all week long. The sea bass limit has gone up to 7 fish, and anglers have been leaving with limit catches on most trips. There are still some very impressive fish in the mix as well, with a few between 5 to 6 pounds. The fluke fishing has slowed a bit, but when they find them, they tend to be big. They will continue to run bottom fishing trips for fluke and sea bass through the third week of September before they transition to cod. They also have a few more tuna trips coming up, but spots are filling quick, so be sure to check out their website for reservations.

Dave, at Ocean State Tackle in Providence, reports that the number of hardtails being reported continues to increase throughout the state, with more bonito and a few false albacore. The striped bass have also taken notice of all the peanut bunker in the area and can be found assaulting them in the Providence and Seekonk rivers. Sea bass are still around in decent numbers, fluke has tailed off, and the scup fishing has been strong at India Point Park. Tautog fishing has been strong across most of Rhode Island, and reports from Buzzards Bay have been very good as well. Dave will be open from 430 am to 730 PM over the weekend, but the hours will be reduced after the holiday, so be sure to check in with him for updated hours.

Captain Connor, at Tall Tailz Charters in Newport, told me that the start of the fall run seems to be upon us, with albies and bonito all over the area. The feeds have been best around the top of the tide, but you can find them from sunup to sundown. Decent sized striped bass are still being caught on tube and worm and can still be found on topwater plugs at times. Tautog fishing continues to improve daily, with very quick limits and some fish close to the 10-pound mark. They have a few remaining spots for the rest of the fall, so be sure to book asap!

Captain Kelly, of C-Devil II Sportfishing, reports that the great fishing continues inshore, with some days producing numerous 40-50-pound bass. Other days are seeing a nice mix of slot fish, along with the larger bass. The false albacore have moved in, and they have been hitting epoxy jigs and deadly dicks this week. They’ve seen them in good numbers at the north end of the island, and also along some of the beaches. Further out, the fleet has been catching a combination of bluefin to 150-pounds, along with some big eyes and yellowfin. The mahi have started to show up on the weed lines, and the sharking remains strong to the south of the island. Sea bass and cod continue to fil the coolers, and the tautog are moving in nicely. Check the live calendar on the website for fall dates.

Joe, at Diorio Guide Service, told me that the fall run is heating up, with plenty of stripers, bluefish, Spanish mackerel and his first albies and bonito of the season last week. Big stripers are still plentiful around Block Island, and mixed sizes of fish can be found on topwaters in local waters. The albies and bonito remain scattered, but seem to be slowly filtering in which each passing day.

The hardtail season is just about upon us with strong reports across Rhode Island. It could still be a bit hit or miss, but barring an extreme blow this weekend, we should start seeing more widespread reports in CT and RI. Striped bass fishing remains consistent around Block, and throughout most of Rhode Island, while the eastern CT shoreline has been a bit slower but is still putting up a few quality fish. The fluke season is winding down locally, but you may still have a good chance to intercept some nice fish as they migrate south. Scup and sea bass action has remained consistent, along with the Rhode Island tautog bite. Offshore anglers still have some time to cash in on tunas and/or sharks, with are both still around in good numbers.