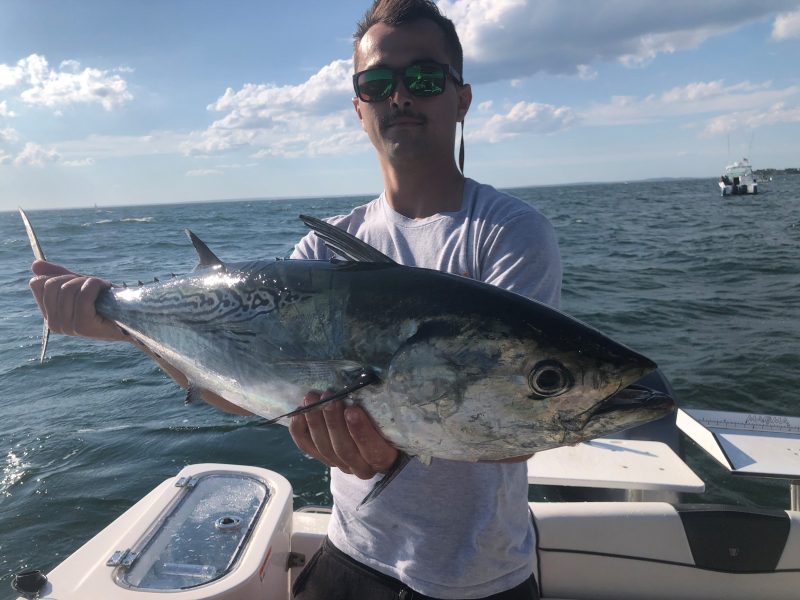 Above: Tom Piccolo of Red Top weighed in this 18-pound albie over the weekend. The albies have been running large this year, and there have been several 12-pound-plus fish reported.

While the weather felt like summer, the fishing reports had distinctly fall feel this week. Schools of fish blitzing under flocks of birds was a common sight around the Cape over the past week. Those blitzes consisted of albies, bonito, stripers, blues, Spanish mackerel, or bluefin tuna.

It seems like a big number of smaller bluefin have moved in over the past week. Fishermen east of Chatham, off Stellwagen, and South of the Vineyard reported seeing big numbers of 30-some-inch tuna. Captain Steve of Chaser Offshore Fishing said that trolling was working best on the small bluefin, but some anglers were catching them on spinning gear.

Steve also said some yellowfin tuna had drifted north from the canyons and were feeding in the shipping lanes. In the canyons, Steve reported a big wave of wahoo that moved in. Joe Gugino of Costa Del Mar sunglasses stopped by the OTW office and shared a wahoo he caught in Welker’s Canyon over the weekend. Andy Nabreski sliced it into sashimi and made some poke bowls for the crew.

Closer inshore, big bonito and big albies are around Martha’s Vineyard and Nantucket. Peter at Larry’s Tackle on the Vineyard said the bonito were hanging at the Hooter, having been pushed out of the inshore waters by the albies. He described the current state of the false albacore fishing as “insanity.” The fish have been good size, and there have been blues mixed in. Peter said the hot lures have been the Shimano Coltsniper Jigs and the Game On EXO jigs. White and glow have been especially hot colors, Peter said. He recommended State Beach and Chappy as places to look for the albies.

“The highlight of the week was a charter that included a trip out to the Hooter. Sam Flamand and his friends, Chris and Adam, teamed up to catch a single day Grand Slam. We got several bonito and bluefish at the Hooter. Then, breaking the rule “don’t leave fish to find other fish,” we headed inshore to look for albies. We got one pretty quick, so with 3 of the 4 species and some time left to fish, we went to look for striped bass. And we found one!”

On the Cape side, the albie fishing seems to be changing day to day. Jim at Eastman’s Sport and Tackle said there have been short-lived feeds at first light on the South Side of Falmouth this week. Nantucket Sound, off Hyannis, seems to be fishing a little bit better right now. Jim noted that boats had some good action with albies off the West End of the Canal on Wednesday. There were some big fish in the mix up there, as AJ at Red Top sent us a picture of an 18-pounder weighed in at the shop this week.

I had plenty of shots at albies in Buzzards Bay on Sunday, but in the same location Monday, the fish had practically disappeared. Albies were popping up off Waquoit on Wednesday, but were moving fast and were very picky. Many fishermen salvaged their days with Spanish mackerel, which have been showing both off the South Side and in Buzzards Bay, often within casting range of shore.

In addition to the albies, there are tons of bluefish in Buzzards Bay according to Jeff at Red Top. There are even some big blues along the Elizabeth Islands, reported Ross from Cape Cod Charter Guys. Ross has been seeing breaking fish every day there and throughout Buzzards Bay, and has been having good trips catching a mix of bass, blues, albies, with some bonito and Spanish mackerel. Some of the albies have been so big, Ross has had to chase them down in the boat.

There was some better bass news this week. Miggy at Maco’s Bait and Tackle reported good bass coming from the Canal after dark on eels and jigs, with some topwater action at first light. Miggy suggested using loaded Cordell Pencil Poppers and paddle tails like the Savage Sand Eels.

Jeff at Red Top said there were keepers joining some of the schoolies in the Canal, and that he’d heard of slot-size stripers off the South Side. On the Vineyard, bass over 20 pounds have been taken from the surf in recent days.

Black sea bass season is closed for recreational anglers, but still open on for-hire boats. Tog fishing is picking up, reported Miggy at Maco’s, and he said the shop will begin stocking green crabs again.

We’re in the thick of the albie season, and while the hot spots continue to shift day to day, the fishing has been consistently good. Running over the Vineyard may be the best bet at the moment, or cruising through upper Buzzards Bay, but as more baitfish vacate the some of the big south-side bays and harbors, the stretch from Falmouth to Cotuit is bound to fire up.

While not all the bonito are hiding out at the Hooter, there have been some big ones mixing with albies, especially along the Elizabeths. Also down there, Captain Ross of Cape Cod Charter Guys reported schools of halfbeaks being chased by blues and albies. They are a favorite food of bluefin tuna and white marlin, so finding them a bit farther offshore would be a good place to drop in a trolling spread.

Striper fishing should continue to improve. Nights will be the best bet for now, and live eels are a staple for big September stripers in the Canal, Cape Cod Bay, along the Elizabeth Islands, and pretty much anywhere you find bass.

The big blues along the Elizabeths have provided some fun fishing between albies, so be sure to pack some larger topwaters in case you find a bluefish blitz.