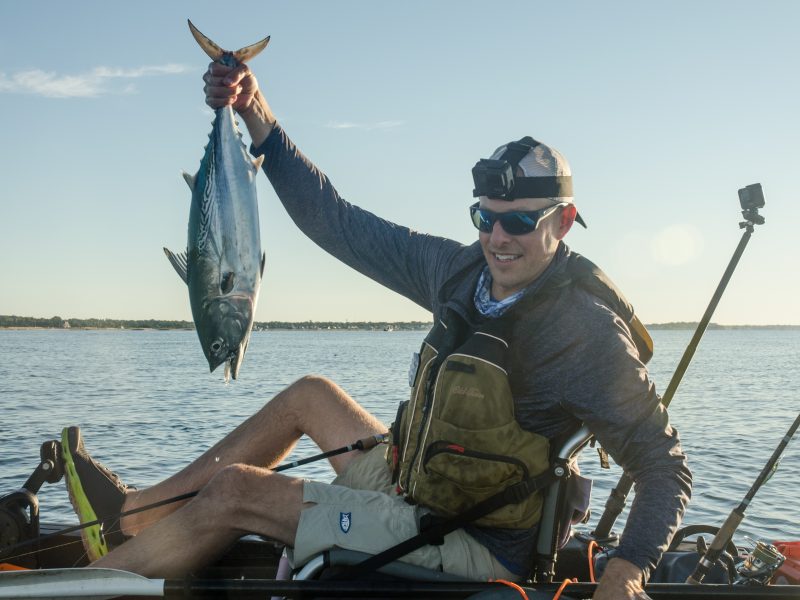 Above: Kevin Blinkoff with an albie caught on Monday.


Albie season is over. You missed it.

Not really.  The fishing did slow down a bit over the past few days, however. The albies scattered a bit, and even when you could see them, they were moving fast and remaining on the surface only for a few seconds at a time. The upside was that if they popped up within casting range, they were aggressively striking any number of lures.

Some fishermen were blaming the east winds. I seem to have more bad trips than good when the wind direction is from the east or southeast. Others, like Jim at Eastman’s Sport and Tackle, were blaming a lack of baitfish out front. He said that was the reason the surface feeds were short-lived and the albies seemed to be changing locations on a daily basis. On Monday, Kevin Blinkoff and I found big schools of albies off the South Side of Falmouth in our kayaks. We caught five fish between us from 6:30 to 8:00 (one even took Kevin for a swim), when we had to pedal away from blitzing fish to get to the office. On Tuesday, there were fewer fish, and by Thursday, none. Jim thinks when the peanut bunker and silversides move out of the backwaters, the albie fishing will pick back up.

The most positive albie reports came from Buzzards Bay. Both Red Top Sporting Goods and Maco’s Bait and Tackle reported good fishing for albies and bonito in the bay. The crew at Red Top recommended white, olive, and green-colored lures.

On Martha’s Vineyard, Sam at Larry’s Tackle said there was a similar slowdown in the albie action, but that some fish were now being taken from the beaches. Peanut bunker around the island had small bass and blues feeding heavily, Sam said, and after dark, some fishermen were catching some larger bass in the surf.

Larger stripers were scarce in this week’s reports, once again, but Jeff at Canal Bait and Tackle reported that commercial striper fishermen have been catching commercial-size bass (that’s 35 inches and up) from boats in Cape Cod Bay. Massachusetts recently added another commercial day in order to help fill the quota, which, as of this writing was less than 40% filled after more than two months of fishing. Recreational fishermen were quick to voice their displeasure, stating that the difficulty in filling the quota was reflective of the current, depressed state of the striped bass population, and that increasing pressure on the already overfished stripers was a bad idea.

Live eels and tube-and-worm trolling are the top tactics in Cape Cod Bay, but Jeff heard of a 30-plus-pounder taken on a plug.

The crew from Red Top had heard of a big school of bass roaming around Cape Cod Bay, but few, if any, made it into the Canal for the full moon breaking tides this week. By all accounts, striper fishing, for larger bass, has been slow in the Canal.

There have been big numbers of little bass, mixed in with bluefish, feeding throughout Buzzards Bay, which seems to have the largest concentrations of baitfish right now. Fly and light-tackle fishing has been big fun for these smaller fish.

On the South Side, the crew at Sports Port said blues are around, and stripers are “here and there.”

Tog fishing is picking up in Buzzards Bay according to the crew at Maco’s. Scup fishing is also good. Black sea bass season closes for recreational anglers on September 8, so you only have a few days to secure your final sea bass fillets of the season. (Fishermen aboard for-hire vessels will be able to keep sea bass until October 9.) Captain Mel True of Fishnet Charters has switched over to tog fishing, and has even caught a big triggerfish at bycatch.

Captain Ross of Cape Cod Charter Guys is still finding black sea bass out past the Elizabeth Islands. He’s also been seeing 30-inch bluefish and the occasional albie and bonito.

Trolling at the Hooter remains the best best for bonito . And it seems most bonito stayed out there all season, rather than run inshore like they did last year. Captain Steve of Chaser Offshore Fishing spoke of the good Hooter Fishing, and also, solid fishing for small bluefin tuna south of Martha’s Vineyard. Last Friday, he was trolling the Shipping Lanes, caught a 50-pound yellowfin, then crossed over into some colder water and found football bluefin tuna. He said there have been mahi out there as well, but they’ve been small.

East of Chatham, Captain John Clothier of Fish Chatham Charters reported that the larger bluefin have gotten scarce, but smaller fish have moved in. Very small. John’s caught bluefin as small as 30 inches this week, and heard of fishermen even catching them trolling spreader bars. The influx of 30- to 60-inch tuna has been a good thing for the recreational anglers who spend much of the summer waiting for tuna they’d legally be able to harvest.

Three free days to fish, and the weather is looking good. The albie fishing is bound to bounce back. Look for the best concentrations of bait, and you’ll have the best shot of finding the albies. If the albies prove elusive, and you’re dead set on catching hardtails, head off to the Hooter and troll some bonito.

For stripers, Cape Cod Bay in the boat is your best shot for a slot-size or larger fish, while Buzzards Bay is likely to produce the best light-tackle action with smaller bass.

It’s the last weekend to catch sea bass, but the best fishing is out past the Elizabeth Islands in deep water. A closer-to-home option for bottom fish are the tautog in Buzzards Bay.

The striper fishing should be picking up. Traditionally, schools would group up in Cape Cod Bay in early September, and build through the month before running through the Canal. That seems to be happening, so despite the slower-than-normal striper fishing on Cape Cod this summer, there’s still reason to be optimistic for the fall run.