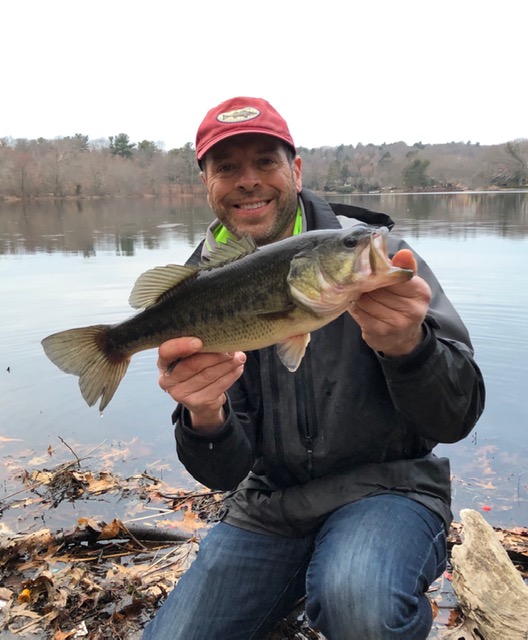 If last weekend was any indication, many of you were banking on it being the swan song of the ice-fishing season. Bait shops near and far sold out of shiners as if there was a fire sale. While it looks as if the hardcore hardwater angler may get one last encore, others are reconnecting with open water species such as largemouth bass.

It’s time for the coast to shine! This historically warm winter has not been kind to Bay State anglers living east of Worcester. The here-today-gone-tomorrow ice conditions have made for a season of frustration. Anglers out west are now struggling with what plagued casters closer to the coast, namely just enough ice to thwart open water attempts but limited safe ice to stand on.

It’s a rare and wonderful thing to have a February free of ice and the Southeast through the Northeast districts now have all kinds of open water opportunities with the spotlight on black bass. Have an 18” largemouth inhale a shiner and take down a float and odds are you won’t be missing the ice in the least!

Pete Belsan said that he’s finally getting foot traffic through the door and the request is similar – “shiners please!” Two local spots worth floating a shiner according to Pete are Billington Sea in Plymouth and Lilly Pond in Cohasset. Pete’s convinced that there are 10-pounders lurking in more than a few South Shore ponds and a lethargic Larry might find a shiner too hard to resist. Nuno from Lunkers in Ashland said that anglers now have the open-water bug. Lake Cochituate is wide open now and has been known to give up some nice largemouth. Other possibilities are Farm Pond and Lake Winthrop. Rivers, such as the Charles, Sudbury and Mystic all have potential. You’ll have the hottest action where the water is warmest in late winter. Seek out spots where shallow, muddy tributaries or inlets dump into the main water body, especially in the afternoon and those will often concentrate crappie, bass, white perch and pickerel. Rodney from Arlington Bait said that cold water species gems – Walden Pond and White Pond – are wide open. In addition to impressive trout both of these are known to give up nice black bass. In addition to largemouth bass, Walden Pond is one of the better smallmouth bass ponds near Boston. Lisa from Fore River in Quincy mentioned Ponkapoag Pond in Canton as one of the better bass ponds around.

Regarding trout, anglers are still catching fall stockies from Jamaica Pond and Houghton’s Pond. If you’re looking for another bait option north of Boston, Rounds Hardware in Stoneham will be carrying shiners from small to large size beginning this Friday! Of course Merrimack Sports has been dolling out shiners and suckers all winter long and there will be no quit now. David told me that anglers are beginning to transition from ice to nice open water action. Upstream of the Lawrence Dam through Methuen, folks are floating shiners and catching pike, smallmouth bass and largemouth bass. Dave recommends Lake Cochichewick by the ice cream stand section for a shot at a nice bass. Fall stocked trout are still swimming in Haverhill Ponds and the “glow” meal worms that Merrimack has in stock is just the thing to catch them.

Patrick Barone of Charter The Berkshires may be kicking the hardwater habit for the season but he certainly isn’t done with fishing/guiding. This week he intends on beginning float trips along the Connecticut River for walleye and pike. Thanks to the wimpy winter, the conditions for early March will be unusually good. He expects current to be relatively benign so he’ll be able to hover over holes where the walleye lie and pound them. If you can affect a vertical presentation your odds increase dramatically. Pike will associate with emerging weeds and blowdowns and Patrick knows them intimately.

Lastly if you still have frozen water fever, the Connecticut Valley Region offers the last gasp of solid ice! Rod from Flagg’s last weekend spent more time on the road than an Uber driver as he struggled to replenish bait. He’s been hearing of pike up to 15 pounds from Lake Onota and Turner Falls is still producing pike and walleye. Last week there were a lot of reports of anglers falling through week ice, thankfully guys were prepared and survived. Above all be careful out there, no fish is worth crashing through the ice for.

If you live near the coast, take advantage of all that open water which is pretty unusual for late winter. Before you know it, there will be other interests such as stocked trout, Wachusett Reservoir, Quabbin Reservoir and salty pursuits so why not check off that black bass box while you can. Artificials will certainly work, but something can be said for a return to basics and a bobber and shiner is as basic as it gets!