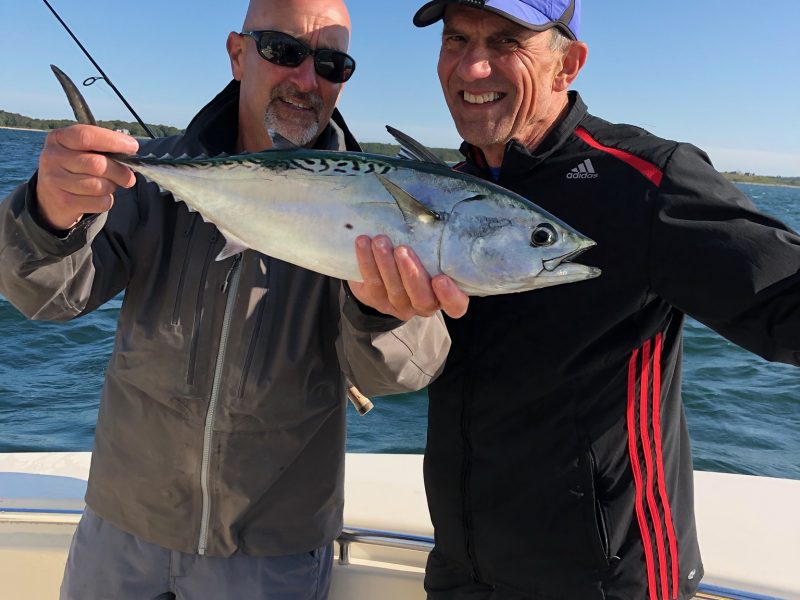 Pictured Above: A beautiful albie caught aboard Fishstick Charters.

Cold nights feel like the unofficial starter’s pistol for the fall run. However, the fishing reports have been mixed this week; the fish seem scattered, but those who find them are doing well. Albies, bonito, and Spanish macks continue to be caught along southside beaches and into Buzzards Bay. Small blues are inevitably mixed in as well. Striper fishing is improving, and fishing at night seems to be the best bet to find keeper-sized fish. There are still plenty of bluefin tuna around, but the giants are becoming fewer and farther between.

It seems like a good number of albies have pushed into upper Buzzards Bay and are entering the Cape Cod Canal. Canal Bait and Tackle reported strong numbers of albies in the Canal from the west end past the Bourne Bridge. There have been some good stripers caught as well, mostly at night with live eels or jigs, but the albies have been the main attraction. Over at Red Top Sporting Goods, reports of the occasional big bass from the Canal have come in. The most consistent action seems to be the albies, as well as bonito. Red Top expects the striped bass bite to pick up again soon as fish continue to trickle in from the north.

Eastmans Sport and Tackle in Falmouth reported a slower week for albies. Not to say they aren’t out there, but it’s been scattered pods that require a lot of travel to find. The striper bite along the Elizabeth Islands has been solid, and boaters throwing eels have been getting 3 to 5 keepers most trips.

Fishy Business Sportfishing echoed that albie report. They’ve been covering lots of ground from the south side into Buzzards Bay, but once they’ve found albies, the fishing has been great.

Cape Cod Charter Guys have been targeting albies and doing well, catching some large specimens up to 12 pounds. They too have been chasing them all over the south side and into Buzzards Bay. They are also finding plenty of small stripers and bluefish in the mix. Most of the blues are small, but there are some bigger ones being caught. The weather and strong winds have been challenging, but with the better weather incoming they are expecting some good days ahead.

Amy from Sports Port Bait and Tackle reported large amounts of bluefish on the southside beaches. Anglers are still getting albies and Spanish macks from the beaches, but it takes getting out on the water to find the bonito. Boats are starting to get on tautog as well, targeting rocky structure with green grabs has been the ticket. She also heard reports of a good topwater bass bite off Monomoy as well as a solid night time bite off Chatham, with live eels.

Fish Chatham Charters has been having a tough time getting out due to strong winds. They reported good  bass fishing off Chatham as well, with some bigger fish being caught in the rips.They also landed a 60-inch bluefin out east of Chatham this week. There are still tuna out that way, mostly smaller fish but a lot of fun. They are favoring live macks over all other baits.

Forestdale Bait in Sandwich mentioned plenty of smaller bass in Cape Cod Bay, but keepers are being landed on the tube and worm as well.

Down on Martha’s Vineyard, Larry’s Tackle Shop reported steady albie fishing, finding albies up to 10 pounds. There has been a decent bluefish bite form the surf. Anglers are finding stripers up to 20 pounds as well.

Fishstick Charters on the Vineyard said the albie fishing has been very hit or miss but is improving. They did run into two albies on Friday on their way back from getting the boat serviced. Another two on Monday with one coming on a 1000-sized Sienna reel. Took them chasing the fish down to avoid being spooled but the albie was caught!

If looking for bonito and albies from shore, the Canal, as strange as it sounds, may be your best bet. If targeting albies and bonito in the ditch, make sure you beef up your gear a bit. Those long hard runs in addition to the canal current is a good recipe to get spooled.

The albie fishing along the south side and into Buzzards Bay remains solid. It’s required lots of running around to find them, but they are around and active. As Jimmy mentioned last week, there hasn’t been a front runner for the “hot lure” this season. Resin and epoxy jigs are working well, but finding them is the main challenge currently.

Striper fishing is slowly improving. They are moving down from the north, both on the outer cape and in the canal. Live eels at night is more than likely your best bet at finding good-sized bass in both locations. School-size stripers are feeding close to shore at harbor and river mouths, or wherever there is abundant bait.