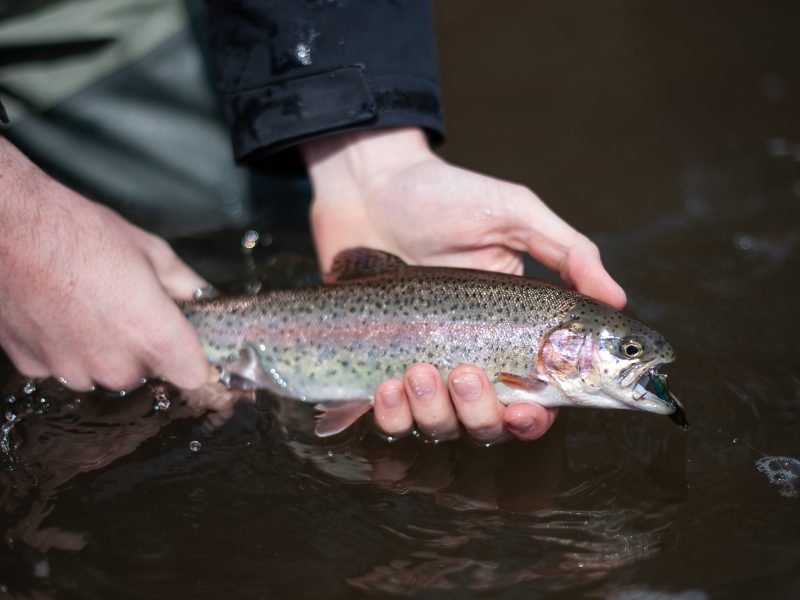 Spring has officially arrived and trout are being stocked in full force all across Cape Cod. With many ponds getting hit with rainbows first, followed by browns and brookies, the fishing is turning on. The OTW crew has found plenty of rainbows and the occasional holdover brown trout while throwing small spoons.

Keep an eye on the Massachusetts trout stocking reports and also pack an extra pair of socks and sweatpants if you plan on wading…after enough time passes, one starts to think more and more about neoprene. The sun is shining but the cold nights are keeping the water temps and the fish down. Bass should start getting more active as the water warms up, but for now a shiner under a float remains the golden ticket.

Canal Bait and Tackle reported that many anglers are out enjoying the freshly stocked trout. They are selling a mix of shiners, PowerBait, and small metals, and customers are reporting plenty of trout are being caught.

Over at Red Top Sporting Goods, they are hearing more of the same. Plenty of nice fish are being pulled out of Peters Pond in Sandwich, and a few anglers are starting the hunt for largemouth bass while keeping a close eye out for river herring.

Amy at Sports Port in Hyannis mentioned there are a few largemouth bass being caught, but the majority of the fishing focus remains on the rainbow and brown trout.

With the warmer weather arriving, the fishing will only improve over the coming weeks. The trout fishing is the hot item at the moment, but keep a close eye on the water temperature. As the water slowly warms up, prepare for the bass and pickerel to pick up their activity.