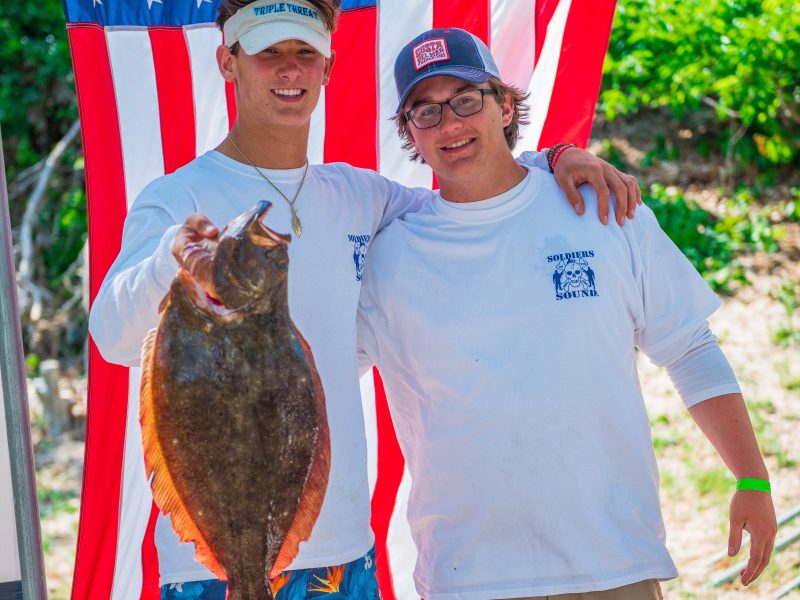 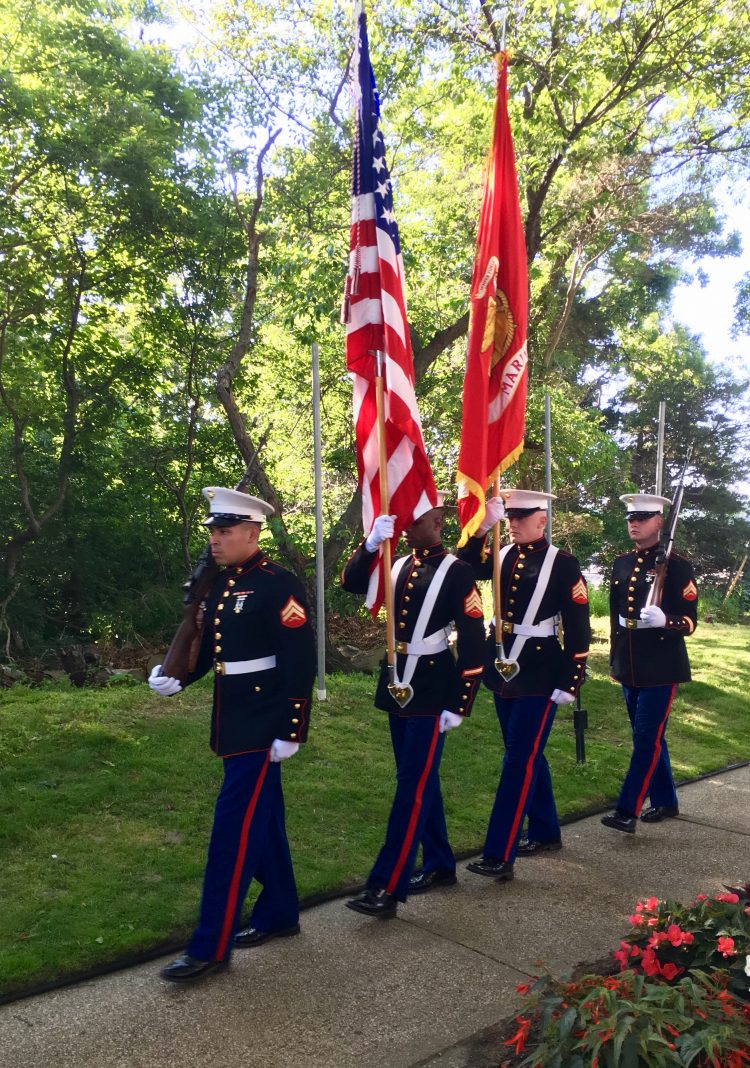 The 9th Annual Soldiers on the Sound Fluke Tournament began exactly as did the eight previous events, with the United States Marine Corp Color Guard presenting the colors of our nation’s flag.  It is a moving tribute to what is always a remarkable day of fishing on the Long Island Sound, and a day for honoring our nation’s active military.  As we all go about our busy lives, we sometimes forget to say thank you to those who protect our freedoms and our coveted way of life.  Those liberties were bestowed upon us by visionary forefathers, etched in our Constitution, fought for in wars, and above all else, preserved and protected for all generations by those who have given military service. Regardless of one’s political beliefs or political party affiliations, we as a nation are united by those freedoms we all enjoy. We are forever indebted to the many who have served and to those who’ve made the ultimate sacrifice so others can enjoy unparalleled liberty. Paying tribute to members of the American military for their honorable and selfless service to our country takes many forms. 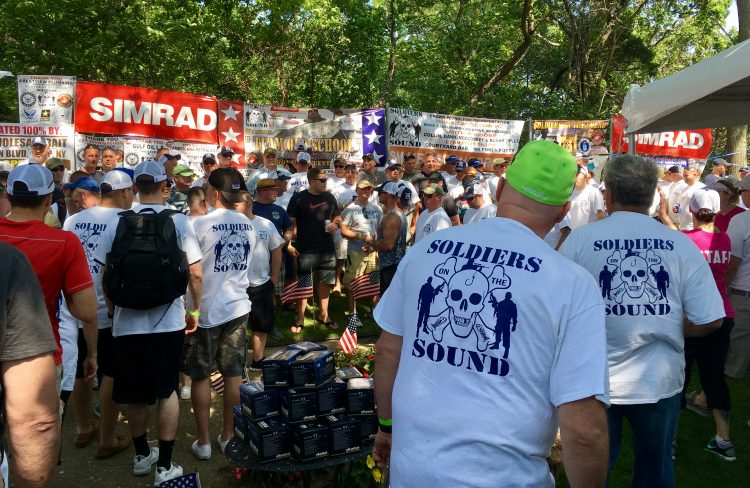 Members of the outdoor community were among the first to embrace that patriotic practice.  One of the most remarkable and enduring of such recognitions is the annual Soldiers on the Sound Fluke Tournament, organized by the Smithtown Bay Yacht Club, and supported by the Veterans of Foreign Wars, Post 395 from Saint James, New York.  The 2017 event marked the ninth gathering of soldiers and volunteers.  Soldiers on the Sound  is one of the most popular and successful of those activities conducted on Long Island or anywhere in the state of New York.

The 2017 tournament drew a total  of  325 participants, including 150 active members of the military and reservists , 65 boat captains, 65 mates and approximately 45 event volunteers, all working concert to make this the best day possible for the guest soldiers.  Those military members in  attendance represented the Army, Navy, Air Force,  Marines and the renowned 106th Rescue Wing of the New York Air National Guard based in Westhampton. Many of the participating soldiers had recently returned from various deployments abroad. 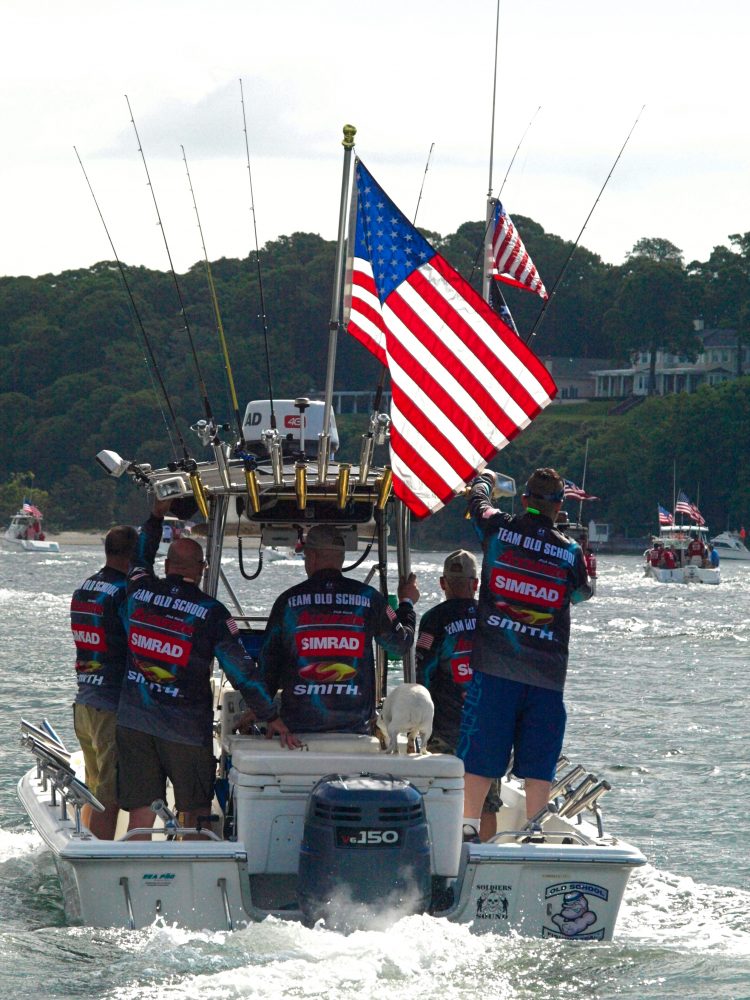 Members of the Smithtown Bay Yacht club, private charter captains and mates volunteered their boats, time and fishing expertise to make this the most expansive and successful fluke tournament thus far.   Many other behind-the-scenes folks, like the “Pink Ladies” volunteered their time and skills to coordinate event logistics and a magnificent clam bake, BBQ and buffet.  An annual highlight of the day for all participants was an equally incredible raffle.  Many fabulous prize donations were made by generous individuals, businesses and corporate sponsors from Long Island and beyond. It was my honor to once again participate in the event and serve as mate aboard Captain Adrian Mason’s boat, Big Trouble.  Two distinguished members of the 106th Rescue Wing joined with us for the day’s fishing activities: Master Sergeant Shawn Burke and Chief Master Sergeant John Bellissimo.  These two seasoned military veterans are also seasoned anglers who are quite adept at catching many fluke.  One of the team’s keeper fluke was a  contender for the day’s weigh-in.  In the end, that fish was bested by the winning flatfish in excess of 6-pounds.  The winning fish was caught by Sergeant William Lee, United States Marine Corps. That fluke weighed in at 6 pounds, 6 ounces.  Sergeant Lee fished aboard the boat, Triple Threat, captained by Anthony Voelker and mate, Hunter Garry.

The concept for the Soldiers on the Sound Fluke Tournament was the brainchild of Kings Park  resident, Mark Garry, President and Founding Member, Soldiers on the Sound Ltd.  Garry felt a compelling and overwhelming need to honor members of our armed forces who  are currently serving our country.  His dedication to both cause and mission is admirable and intense.  . Garry also serves as Tournament Director and said of this year’s tournament: “ After nine years of organizing this event, I am still humbled by the outpouring of support that we receive from all of our volunteers and sponsors. But even that feeling pales in comparison to the overwhelming feeling of pride and respect I have for our military guests.  Soldiers on the Sound is all about the gratitude and appreciation of the men and women who protect our freedoms.”

Along with his incredible team of volunteers he took his vision from a seed of an idea  and turned it into reality, organizing and running one of the most successful and best events of its kind anywhere in the United States.   From the start, the Smithtown Bay Yacht Club and the Veterans of Foreign Wars, Post 395 from Saint James signed on to make this event an instant success that has only gotten bigger and better in subsequent years.  A veritable army of “Pink Ladies” volunteers also worked tirelessly and selflessly to orchestrate the logistics of food service and raffle prizes.   While the initial nine years ago was a tremendous success, the 2017 tournament sets the bar even higher. This event just keeps getting better each year.  All soldiers and civilian participants were treated to a pre-tournament breakfast, a hearty barbeque upon their return from fishing, live music and a hot food buffet as the extensive raffle was conducted.  It seemed as if prizes were being handed out non-stop for hours:  fishing rod and reel outfits, gift bags, gift certificates and hand-crafted products  The top prizes were  kayaks, flat screen TVs, internet tablets, and BBQs.     There were rounds of applause, pats on the backs and smiles aplenty; and the soldiers returned to their bases with gear bags heavier than when they arrived  It all felt heartwarmingly good.

Once out on the water bouncing the bottom in search of fluke out team got better acquainted. We team talked about fishing, the military and the mission of the 106th Rescue Wing.  Fishing is a terrific bonding agent. I learned that the “wing” deploys worldwide to provide combat search and rescue coverage for United States and allied forces. They are recognized as a world-class team of diverse, adaptable rescue-focused personnel. Their primary mission is to provide worldwide personnel recovery, combat search and rescue, expeditionary combat support, and civil search and rescue support to federal and state authorities.  Many of the wing’s returning soldiers were engaged in many successful rescues in Afghanistan.   The 106 also provides personnel recovery to the state of New York and supports any sate operations where their specialized expertise is needed, such as with natural or man-made disasters. Their track record is exemplary

Beyond the fishing, the food, the prizes and the camaraderie of the event, one soldier’s comment struck home. During one of the idle moments in an otherwise very active day, Chief Master Sergeant John Bellissimo spoke about the importance of the event:  “You cannot imagine how much an event like this means to the entire base,” he said. “Even those soldiers who did not attend will be talking about this for weeks. What matters most of all this is that we know people here on Long Island care about what we do. We are already looking forward to next year.”