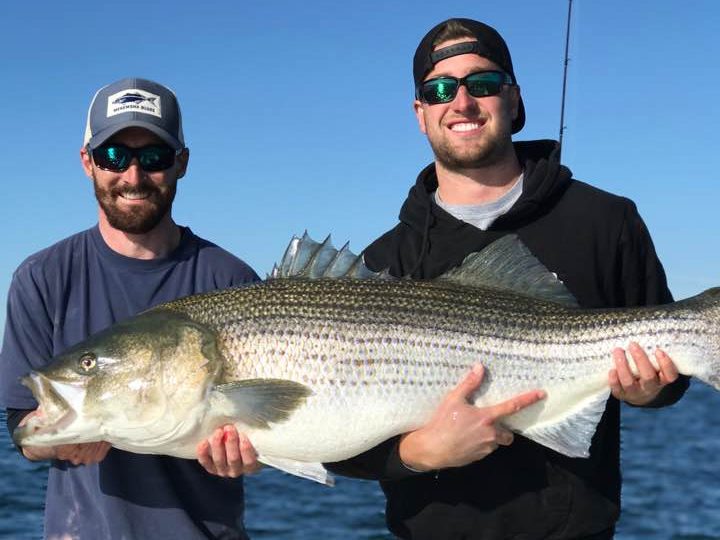 The first wave of large stripers reached Cape Cod a little early this spring. Boat fishermen in Buzzards Bay have been pulling the occasional 30- to 40-pound fish out of large schools of 24 to 36 inch bass. When Captain Jeff Fortin, Captain Kevin Gould, and Brad Murphy hit the bay on May 16, they were hoping for their first 30-pounders of the season–none of them dreamed they’d be returning to the dock with a fish more than twice that size.

“All morning, we’d been in fish to about thirty-six inches,” said Captain Jeff Fortin, “but the bite slowed, so we made a move.”

“We saw some birds working over a rockpile, and motored that way,” said Captain Kevin Gould. “The first fish Jeff caught there was a twenty-five-incher.”

“I hooked up and the fish took steady drag, like you’d expect from a tuna,” Fortin said.

“I’d say it took 100 yards on its first run,” Gould said. He asked Fortin if he should follow the fish, but Fortin declined, not fully knowing the size of the fish he was attached to.

“I figured it was a thirty- to forty-pounder running with the current, but I kept tightening and tightening my drag, and the fish wasn’t slowing,” Fortin said.

Fortin was fighting the fish on a size 5000 Shimano Saragosa spooled with 30-pound test braided line attached to a 25-pound-test leader with a uni-to-uni knot. With the real possibility of being spooled or having the fish break the leader, Gould maneuvered the boat as it ran underneath another boat.

“I felt the fish get on a rock momentarily, where it must have picked up a bunch of weeds,” Fortin said.

Weeds covered the bass when it first came into view next to the boat, making it difficult to determine its full size. It wasn’t until it hit the surface that Gould, Murphy, and Fortin got a good look at it.

“I told Kevin to get the net, and he told me, ‘That won’t fit in the net!’” Which meant Gould would have to land the fish by hand, while being careful not to part the 25-pound-test leader.

“The fish didn’t even seem to notice me when I first tried to grab its lip,” said Gould. “I finally had to jam my whole hand into its mouth to get a hold of it. When we got it into the boat, all we could do was stare at it.”

From hookup to landing, Fortin estimated the fight at about 13 minutes, an eternity for a fight with a striped bass.

After a couple photos, they tried to revive the massive bass, but the fish was spent and rolled over. Later that morning, it would weigh in at 64.6 pounds on the scales at Falmouth Bait and Tackle. Fortin, who has joined the Striper Cup almost every year, said it was the first fish he ever weighed in for the tournament.

The 52-inch bass had a 35-inch girth and five full-size pogies in its stomach, along with a half-digested mackerel.

Fortin credits Gould’s boat handling and fish-wrangling for giving him the best possible odds of landing the massive bass on light tackle.

After getting the 64-pounder, the crew made another drift through the sweet spot. “The fish we caught immediately after the big one,” Gould said, “measured about 13 inches.”