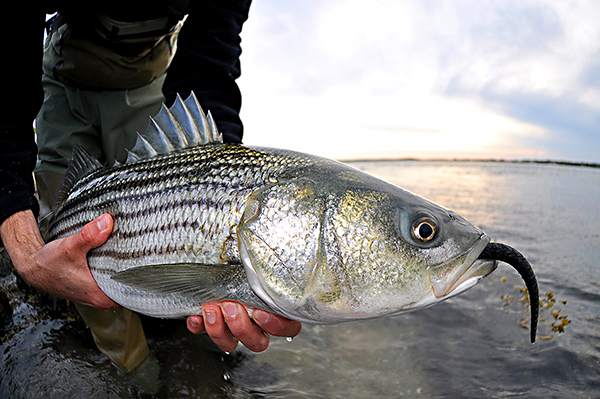 We have definitely been getting some April showers as this past weekend had Mother Nature dumping several buckets of rain over most of New Jersey.  The weather hasn’t deterred the die hards as anglers are still having fun with Stripers, White Perch, and Winter Flounder.  In the coming weeks, there should be an influx of Tiderunner Weakfish as the moon waxes and wanes. It’s only going to get better.

So here’s this week’s rundown:

Fisherman’s Supply in Point Pleasant reported good fishing outside in the South pocket for 18 to 24 inch Striped Bass.  The Stripers have been feeding on Spearing and Sandeels, so slimmer profile baits should do the trick.  The Route 70 and Route 37 Bridge have been producing some consistent action at night on soft plastics for Striped Bass.  The Winter Flounder bite has been good, especially along the Southside of the Point Pleasant Canal on Bloodworm or Sandworm.  The Tog bite was “so-so” according to Jason, as he received reports of shorts with occasional keepers.  Most of these fish have been caught on the offshore reefs.  The shop has all of the Hobie Kayak models, so stop by and check them out.

Betty and Nick’s Bait & Tackle in Seaside Park reported the small Striper bite in Barnegat Bay on fish in the 10 to 25 inch variety.  Soft plastics, swimbaits, and small plugs have been doing most of the catching.  The bridges and docks are producing small Stripers and the shop recommends trying places that have lights.  There is still a pick of Winter Flounder near the Oyster Creek outflow.

Creekside Outfitters in Waretown reported Winter Flounder on the west side of Barnegat Bay and a lot of fisherman are getting small schoolie Striped Bass from 14 to 18 inches.  There has been some 28-inch fish caught, but the ratio seems to be close to one in twenty.  Crabs are starting to show, but this will take some warmer weather to ramp up.

Riptide Bait & Tackle in Brigantine reported a lot of anglers stopping in the shop to pick up live Green Crabs for the start of the season.  The Atlantic City area has had a decent bite on small Striped Bass and Tog.  Tog have been hitting Green Crab on jigs and rigs.  The shop has the full line of Temple Fork Outfitter (TFO) surf rods, so stop in and try one out.

Fin-Atics in Ocean City reported Striped Bass in the backwaters of Ocean City to Wildwood.  The surf hasn’t produced compared to the backwaters, but that will change as the weather and water temperatures pick up.  Soft plastics in the white and pink colors have produced on 3/8oz jighwads worked around bridge and dock pilings.  Most of the Striped Bass have been in the 18 to 20 inch variety, with only a few fish to 30 inches.  Bloodworms have also been producing with comparable results to artificials.  They are getting White Perch reports further up the Tuckahoe, Middle, and Mullica Rivers with most of the action being on the start of the outgoing tide.  The tog opening had a fair bite with most offshore reef sites holding some fish.

I did receive some reports out of Cape May that the Delaware Bay is showing some signs of life and anglers are starting to pick up keeper Striped Bass.  The only drawback is that you have to put in a lot of time.

The hottest land-based bite seems to for Tog around the Atlantic City area, so stop by one of the local shops, pick up Green Crabs, and start bailing fish.  Although small, Striped Bass seem to be around most docks, bulkheads, and creeks.  If you can find go access to area’s that have lights, the night time bite will be your best option.  Remember, keep it slow in the Spring.  Good Luck, Be Safe, and Tight Lines!