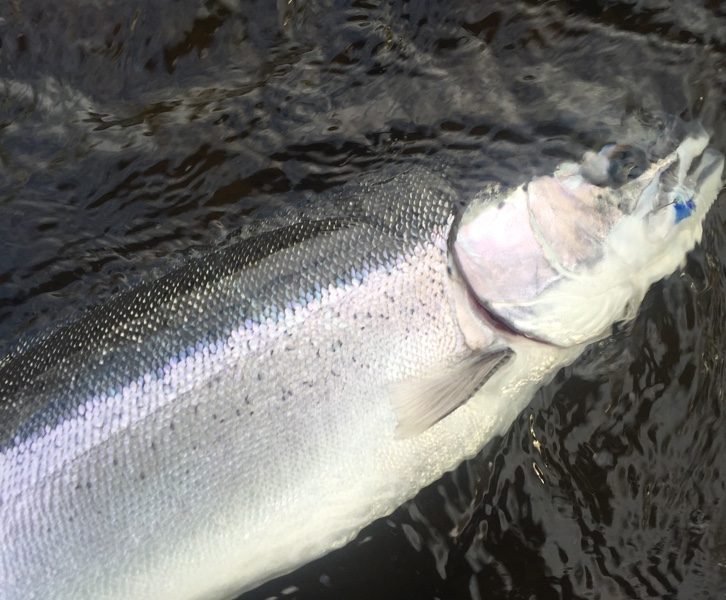 The weather in Pulaski, New York this fall has been beautiful—which is exactly the problem. Sunny days and low water levels limited the number of “fresh” steelhead moving into the Salmon River from Lake Ontario through October and early November, and the fishing reports were reflecting the slow fishing. But I had the weekend free, so I loaded the car and left Cape Cod for Pulaski around midnight on Friday.

The single bright spot in the reports had been the upper river in Altmar—the fly-fishing-only zones and the area immediately below them—but with unseasonably warm temperatures forecasted, the crowds would be big, so when I rolled onto Route 13 from Route 81 at about 6:00, I turned left and headed for the lower river.

I have no qualms about shouldering into a crowd, whether it’s Montauk, the Canal, or the Fly Zones on the Salmon River, but the reward for fishing the lower river isn’t the (relative) solitude, it’s the fresh-from-the-lake steelhead.

When a steelhead first hits enters the river, it’s more tuna than trout. It has spent anywhere from the past 8 months to the past 3 years swimming through the vast waters of Lake Ontario, hunting pelagic baitfish like alewives. Its back is a dark black, its sides, a brilliant chrome, and its belly as white as the driven snow. The second that fish leaves the lake, it begins to change—the colors dull, and its aggressiveness and attitude soften. A steelhead no matter where you catch it, is a magnificent fish, but the piss-and-vinegar of a fresh-from-the-lake fish makes those ones a little extra special.

So I walked the Lower River, jumping pool to pool, and only once did my float drop under the power of a fish and not a snag, and I lost it. I hit the tackle shops around lunch time to refill on salmon eggs and split shot, and heard that the first light bite in Altmar was fantastic. Lots of hook ups, lots of crowds, lots of fun. I’d also heard the bite died after and a couple hours, so I resumed my walks along the Lower River.

A little after 1:00, my float disappeared as it walked down a current seam. I lifted my 13-foot rod and the tip began to bounce as a blindingly bright steelhead erupted from the river. It streaked directly at me, forcing me to scramble to pick up the slack and just as quickly turned downstream and vaulted a set of rapids. I gave chase downriver, around a bend, and eventually grabbed the tail of the beautiful hen steelhead, a fish that have been in the lake no more than a few hours.

I only caught one more fish this weekend, and though I would have definitely caught more up-river, the long walks and fishless hours seemed like a fair trade for a couple encounters with some dime bright steelhead.