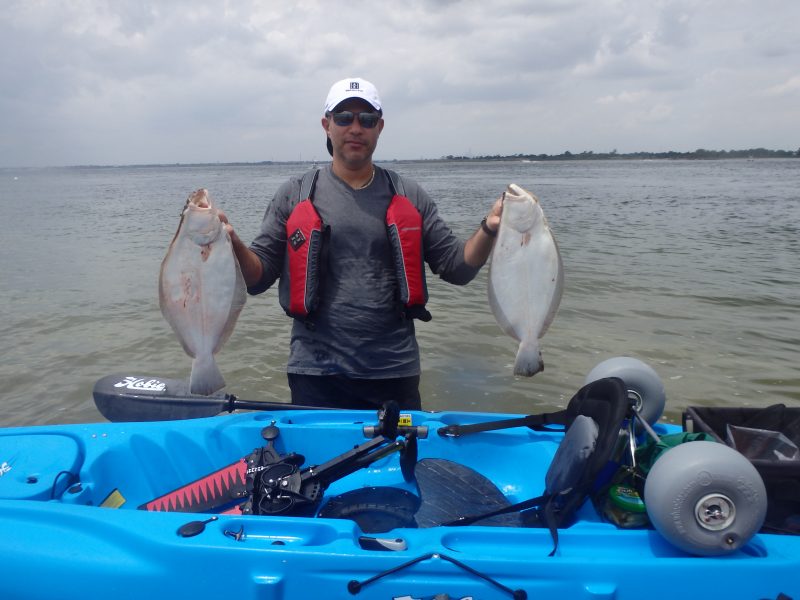 Fluke Fever
Fluking has been great for all the kayakers in the NY Metro area. The keeper to short ratio has been very good in most areas and there is a shot at a doormat now. Monday morning I had one just over 6 poundss on a guided trip. I had three guided trips this week and some in challenging conditions with at least 5 keepers per trip….so some very good fluke fishing is taking hold for early summer. Concentrate around high water periods in either the back bays or towards the inlet. I’ve been finding fish on ledges in general, but have been covering a lot of ground to pick keepers out of different areas. Don’t commit to a certain area if you landed one nice fish! Come back to it after an hour or two if the action dies out. Spro bucktail’s and Gulp! Swimming Mullets have been most consistent producers. Striped Bass
Holdover bass are still in the back bays of Jamaica Bay and I hear the Raritan River as well. They won’t bite on a sunny day, and I’d work hard early in the morning. I’d stick with working the north shore for some schoolie bass and a shot at a keeper. Trolling tubes, working surface plastics, and poppers might get you a nice fish out of a boulder field. If you have the access and are adventurous bass are on the ocean side bunker schools. Monitor your weather carefully and think safety first!
Bluefish & Weakfish
A lot of bluefish ranging from cocktails to 5 pounds are still in Jamaica Bay. Small packs are hanging off bunker schools and up in the marshes. Trolling tubes and poppers are a good way to get a bunch. I am sure the smaller blues are still in Raritan Bay as well. I didn’t catch a weakfish this week, but a few are being caught in Jamaica Bay. They have been ranging from five to eight pounds this so far this season.
For daily reports and information on how to book a guided kayak fishing trip with Elias, visit: New York Kayak Fishing Guide Services