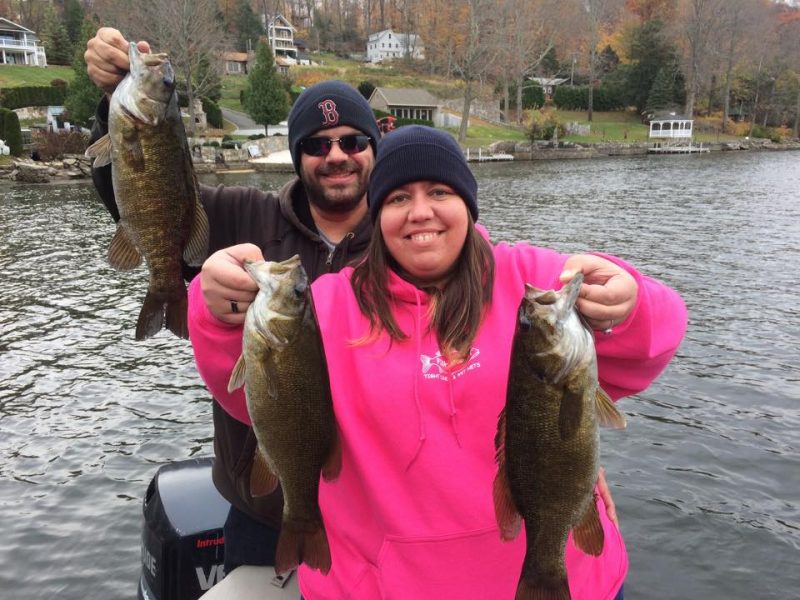 We’ve had some serious wind this past week which kept many anglers off the water. But there has also been some exceptionally nice days that have been perfect for fishing. Toggin’ is still going strong and anglers are picking up a lot of quality fish. Bobby J’s Bait & Tackle reported blackfishing as hot with some 7 and 8lb fish hitting their scale late last week. Good fish are being found along rocky shorelines and breakwaters. We had some reports of anglers boating 50+ fish in a day. There are a ton of shorts to be found, especially if you are fishing from shore. But grab some green crabs and put in some time, you’ll be rewarded.

Striper action is doing very well in the tidal rivers. Schoolies have entered the rivers and will provide fun action on light tackle in the months to come. The Housatonic and lower Thames have been decent for bigger bass, but the mouth of the CT and into the river has been great. The river was still a bit muddy earlier in the week and there are some bunker around. Good bass were taken on top water early in the morning. Some fish that were holding deeper on humps and at Long Sand Shoal fell victim to live bunker. Also, a good number of fish taken were again attributed to the use of eels after dark. They call them striper candy for a reason! Jimmy O’s Bait & Tackle down in Bridgeport reported some decent bluefish action. A few good blues were caught down on the causeway in Old Saybrook, but the reports seem to be slowing up a bit. Some decent scup were reported and some ok seabass were caught on local reefs. If you want hump heads, look deep, like 80-100 feet of water.

Again, the wind made things rough for a few days this past week. A lot of places are turning over and this is when fish will hold a bit deeper and suspended. Of course “deeper” is relative to each body of water. This will continue as fall progresses and the thermocline temperature changes. Fishing may be a bit painful for some anglers until water temps even out, but then the ice sets in. Bass anglers are getting in on that hair jig bite that has been decent. Try targeting the edge of weed lines and structure. Good largemouth came from Candlewood, Ball pond, Pachaug pond, Bantam and the CT river. Smallmouth fishing is right on par with the largemouth bite.. Decent catches were reported from Candlewood, Lillinonah and the CT river.

Good pike reports came from Lillinonah and the CT river. Coves and backwaters are producing some nice norhterns. If you’re having a hard time with artificials, get some jumbo pond shiners and toss em out. White perch action has been picking up in the CT river and using spreader rigs will help you catch em up twice as fast. They also make great pike bait if thats what you’re in to! Catfish have been active and reports came from coves along the CT river. Lots of them, just nothing too big. Carp action is still going strong with some fish in the high teens and a few just over the 20lb mark coming to net. Reports were scattered, but most came from along the CT and Shetucket rivers with a few fish coming from small, no name ponds. Panfish action has been good. The yellow perch are very active but a lot of dinks are being caught. Those slabs are hanging deeper now and suspended. Dusk to dawn has been most productive because these fish can be tight lipped during the day. Try down sizing if you aren’t getting any bites. Don’t be afraid to break out some ice fishing tackle when searching for panfish this time of year. Tipping a jig with a small, scented soft plastic like Makiplastics http://www.makiplastic.com/bait/ can make the difference. A couple walleye were pulled from Squantz and the Saugatuck reservoir, but were barely keeper sized fish. It seems they are already on the move to their winter haunts. Trout were reported from various places. A lot of stockers from Mt. Tom, Squantz, Black Pond, Beach pond as well as various rivers and streams. Better quality fish came from the upper Housatonic and Farmington. Flows have increased from recent rains, which is a good thing. Salmon are doing ok along the Naugy and Mt. Tom. We even had one angler do well with kokanee on West Hill pond.