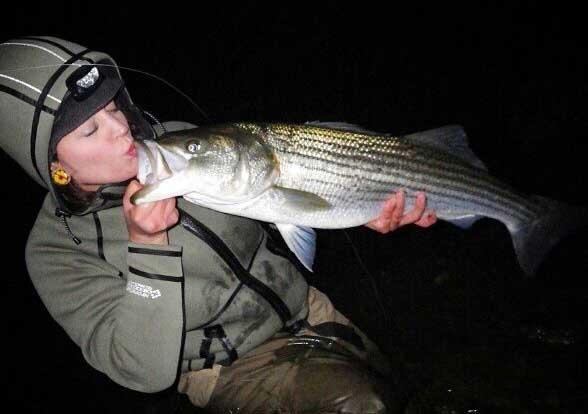 Bunker have been hanging in the CT river but that won’t be for much longer. Big blues are still cruising the mouth of and into the river. Some fish up to 15lbs were reported. Though with recent rains the river became a little muddy and the excess flows pushed fish back a bit. Just outside the river, Long Sand Shoal and Hatchetts produced a few good bass and gator blues. Bluefish will start to thin out a bit while the quality and quantity of stripers seem to be improving. Theres a ton of schoolies and some more decent fish being reported. But catches of 30lb+ fish aren’t uncommon now that the fall run is heating up as water temps cool down. The DEEP dock and causeway have still been very productive for both bass and blues while dunking chunks. Fishin’ Factory 3 had a nice 35lb bass hit their scale at the shop this past weekend. The lower Housatonic and Thames have also given up some solid bass again this week. However, out of all the tidal rivers the CT really seems to be where the action is best right now. Eels at night have accounted for some of the larger fish being taken.

Tog fishing remained excellent again this week. There is no shortage of keeper sized fish and boat anglers are limiting out quite easily. A lot of fish anywhere from 4-8lbs were reported with a few just over the 10lb mark. Good fish are being found on rocky shorelines and breakwaters. Though, quality fish reports from shore have dwindled a bit. Better fish (and more of them) are being found by boat and kayak out on rock piles, wrecks and shallow on reefs. If you are fishing reefs for blacks, be sure to bring gear for scup and seabass as can have yourself a multi-species day out there. Scup and seabass are still doing well but there are a lot of shorts, and I mean a lot. More desireable fish are being found in deeper water out on the reefs. There are still some dinner plate sized scup and some big hump heads to be caught, just look closer to 50′ of water. Haven’t heard much about albies this week. It seems they pop up here and there, then they’re gone.

Bass fishing is still going strong on lakes and ponds across the state. Fish are being found somewhat shallow in early morning but later in the day they are out a bit deeper. Find and fish the outside of structure and you should do well. Good largemouth reports came from Candlewood, Ball pond, Moodus, Pachaug, Amos and Highland lake. Spinner baits and cranks are getting the job done for largies. Fishing for bronzebacks has been great as well. Small jigs, spoons and small cranks are putting a hurting on smallies. Smallmouth reports came from Candlewood, Squantz, Saugatuck reservoir, Gardner, Shenipsit, Zoar, Lillinonah and the CT river. Walleye were reported from Squantz, Saugatuck reservoir and Gardner. Pike are out in full force and solid reports came from Bantam, Lillinonah, Pachaug pond/river and the CT river. Large two piece rapalas, spoons and spinner baits are great choices when trying to get the attention of a big northern. If you seem to be striking out, try live lining a sunfish or perch. They are really starting to feed heavily and these aggressive fish will attack anything up the half their size, big bait = big fish!

Catfish are carp reports were good again this week from along the CT and Housatonic rivers as well as various lakes and ponds. Chunky cats were reportedly caught on cutbait and chicken liver. While the carp are loving sweet corn and a variety of boilies from K-1 Baits and World Classic Baits. They are still very much active but will be calming down soon as water temps drop. Especially carp, as their eye sight deminishes in colder water. Thats why strongly scented and bright colored baits can make a difference when targeting Mr. Rubber Lips late in the year. Trout fishing is doing well along the Farmington and upper Housatonic. We also received some reports of stockers from some lakes and ponds but nothing to write home about. A few more salmon reports came from the Naugy and Mt. Tom again this week. Panfish action is hot right now, big gills, jumbo perch and slab crappie were reported from all over. Fishing small jigs, grubs and small shiners over weed beds and downed trees can produce some excellent panfish this time of year. When you find one, there will be many more waiting for you on your next cast. Happy Halloween everyone!!!