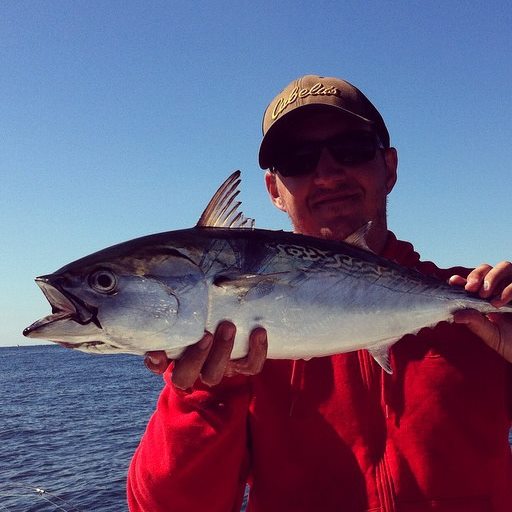 Fishing in LIS was banned briefly from Norwalk to Milford late last week due to chemical runoff from a factory fire in Bridgeport. That really put a damper on some anglers plans. I have next to nothing to report for bass other than some schoolies and some decent sized fish from the mouth of the CT and Shetucket rivers at night. A few of our kayak guys did pick up some larger fish but they worked long and hard for them and aren’t talking much. Other than that, the general consensus is that bluefish blitzes have been keeping anglers busy while the striper bite has slowed.

The CT river is still packed with bunker as its been all season. Anglers are snagging bunker and tossing them right back out, whole or chunked. One person reported snagging bunker and ended up catching eight at once as they became entangled in his line. There is literally that much bait and its why the mouth of the river seems to be bluefish central for shore fishermen. Solid fish anywhere from 10lbs to just over 15lbs were reported. Other good reports for blues came from most harbors and reefs, also The Race and Plum Gut. Chopper blues are cruising and there are some quality fish to be found, but the night shift is your best bet for a monster from shore. Snapper blue fishing is still going strong and they are a bit bigger now too. Most of them reported are in the 6-8″ range. Most harbors and tidal creeks including the Black Hall river and Lieutenant river have been consistent producers of snappers. Crabbing reports have been slow lately. Quantity has diminished but quality has improved. There is still some time to find a few big ones!

If you’re looking for table fare then scup and seabass are your best bet. The action was red hot again this past week. You can find these delicious fish (and lots of them) just about anywhere there are rocky shorelines, breakwaters, reefs and wrecks. The fishing on most reefs for these two species is reported as excellent. However, a lot of shorts are being caught so you may need to put in a little time. Bonito and albie fishing have picked up. However, the albie reports have been a lot more consistent. Reports have mostly come from boat as anglers chase these speedsters around the sound, but there were a few caught from the surf. They are back and many anglers are hooking up with little tunny just over the border in RI and now into CT waters.

We have entered that painful transition from summer into fall. Temps have dropped off a bit and the nights are chilly. Bass fishing has been fair lately with some good largemouth reports from Candlewood, Bantam, Squantz, Ball Pond, Moodus, Saltonstall and Waramaug. Smallmouth reports have been really slow aside from some decent catches from Candlewood, Squantz, Housatonic river and CT river. Carp reports remained consistent this week with fish up to 20lbs coming to net.

Catfishing seemed a little slow but anglers must remember that much like carp fishing, prebaiting is key to success. You must prebait to draw in and to keep fish around longer. Walleye have been have been biting at Squantz pond and Gardner lake. Pike fishing is starting to pick up with some good reports from the Housatonic river, CT river, Pachaug river, Zoar and Lillinonah. By next month we will see some great walleye and pike fishing as the march of the teeth begins.