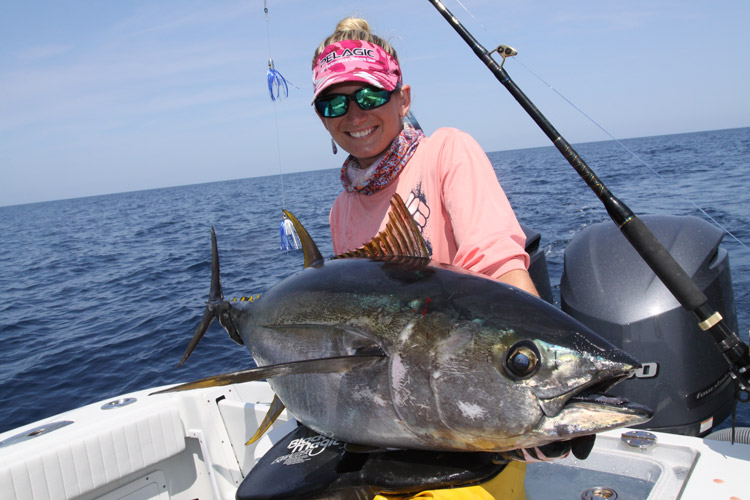 The spotty weather of the past few weeks had us land locked. We waited patiently until this past weekend when the forecast came out for two foot waves on a thirteen second period and light winds. Time to head back to the edge.

Our crew of five left the dock in Edgartown harbor around 3pm this past Saturday. Geared up and iced down, we headed out past the lighthouse with everything stowed for the hundred mile run. Winds were near zero and waves one foot or less making for a smooth and steady run at forty knots. Spotted a couple sharks finning on the surface and one dead whale carcass we stopped and investigated before continuing on south.

As we approached Atlantis Canyon there were a number of pots with heavy seaweed growth on them. With the water temp seventy six degrees we knew mahi might be around so decided to stop and throw in squid with spinning rods. Soon as we pulled up to the first po, a dozen bright blue mahi swirled up in the blue water. Lines in. We caught five nice mahi before we got anxious, pulled our lines in and headed for the canyon. We arrived at Atlantis Canyon a short time later. Outriggers out, lines in. With a nice catch of mahi already on board, spirits were high. A buddy boat then radioed, “lots of weeds, no tuna caught today, picked up a handful of mahi early in the day…dead water, no tuna.” Bleak report. We got to work clearing weeds and working the spread when a spreader bar trolled from the outrigger got hammered. One lone strike, nice long run on the 80W reel so rigged up the harpoon. After a nice fight and some aggressive circles the tuna was pulled boat-side to the harpoon, nice sixty five pound yellowfin on deck. No more action before dark so we set up for our first drift of the night on the west wall. Underwater lights on, swordfish and tuna baits launched then we begin chunking butterfish. It was a full moon so we had great visibility through the night. WE had a number of knocks and short runs on the sword baits through the night. We never came tight but had everyone’s heart pumping. One squid came up with a slash, usual behavior for swordfish who sometimes hit the bait with their bill. Beautiful night, glassy calm with great underwater viewing. In the morning we were back on the troll but the tuna couldn’t be found. Around 9am we made the call to pull lines in and fish a few more pots for mahi. The mahi were thick and fired up which made for great fun watching them take baits just under the glassy water. Even had a close encounter with an ocean sunfish who chased the boat around for a while. Had a couple sessions of triple hookups, mahi flopping around everywhere, good times. Around one of the pots we saw marks on the sounder so we put out the trolling spread. After a couple passes, one rod came tight to a good size longfin tuna. We kept working the area until another rod bent over, producing another thirty pound longfin. We trolled a while longer without a bite and then headed up on the flats to check out some warmer water towards the tip of West Atlantis Canyon. We were stowing gear and sorting things for the run home when the center rod goes off. Big initial run and a female angler hopped on the rod for her first tuna! Beautiful big yellowfin. It’s always a special moment when someone catches their first tuna. This salty female crew member rose to the occasion, cleaning the fish herself and dragging it to the box. She also performed the revered heart ceremony, an old custom that is widely known but not so widely practiced. Well done, a special experience for sure. Around 1:30pm we sorted everything for the ride home. Gear stowed, lines in, outriggers in. Another smooth and fast ride home put us at the dock in Edgartown around 4pm. Everything clean, gear washed, dried and put away for the next run.

Thank you to all buddy boats working the area, pleasure to help and be helped so far from shore. Also thanks to those who make this possible. Family, crew, OTW , much appreciated all around.