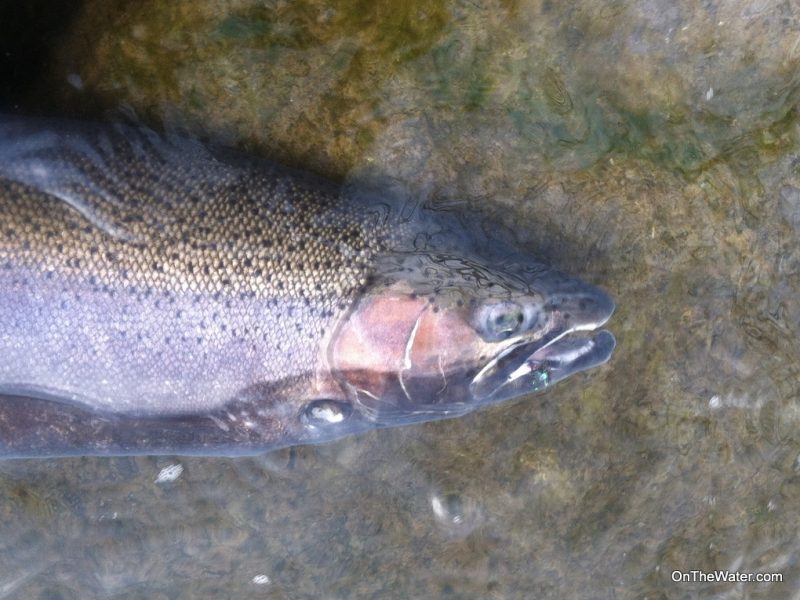 Once in a great while, I’ll have a fishing road trip planned with a friend, and for whatever reason, they’ll bail at the last minute, offering some flimsy excuse for why they can’t go. Every time, I tell my buddy or co-worker that they’re going to miss out on some great fishing, but all too often, the fishing turns out to be somewhat less than great. I return from the trip, report on the poor fishing, and vindicate their decision to flake. But not this time. This weekend’s trip to Pulaski, NY was one that you wouldn’t have wanted to miss.

March can be a hit or miss month for steelhead—so I’m told. The fish generally start spawning sometime during the month, which can make it difficult to get them to bite. Also, depending on the weather, March can be runoff time on the Salmon River.  During my only other visit to the Salmon River in March, the river was running 2000 cfs, pretty high compared to the usual 335 to 750. The plus side of the high water was that it was bringing chrome bright steelhead in from the lake. The downside was that those steelhead were nearly impossible to land in the roaring river.  They’d turn downstream and run too far and too fast for me to chase them before they broke my line.

This trip was quite different. There is a ton of snowpack around Pulaski, enough that when it starts to melt, the river is going to be running high and dirty for some time. This weekend, however, the river was low and clear, running 285 cfs. The fishing pressure was high, but the fish hadn’t yet started to spawn, and were willing to bite, provided you were fishing the right fly.

I’d tied tons of egg patterns since my last trip in late December, I shouldn’t have been surprised that the steelhead only wanted nymphs. During one of two fly-restocking trips to Whitaker’s (where the Striper Cup is currently on display), the guys there said in the clear water, fish are more likely to be spooked by the brightly colored egg patterns. Plus, with the salmon spawn a distant memory and the steelhead not yet spawning, there aren’t many eggs in the river.

With a stonefly or caddis pupa pattern, it was rare to go more than 20 minutes without a take. At one point, I hooked 8 fish in 15 minutes, landing 4 of them.

When it came to telling my friend about the trip, I tried to take the high road and not rub it in too much—I simply sent him a text (with a photo or three) and said I hoped he was enjoying the weekend as much as I was.

Below are a few of the steelhead from the weekend. Please forgive the poor pictures—my cameraman bailed at the last minute.