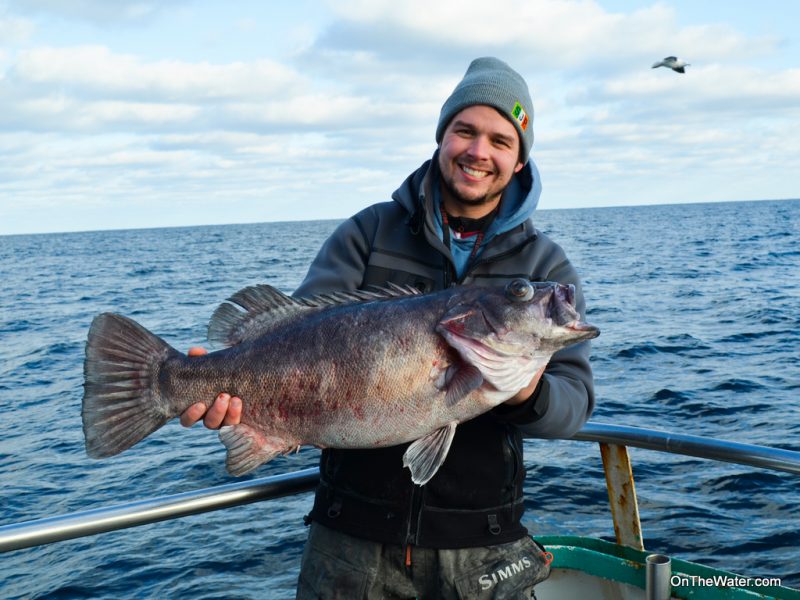 It felt strange driving down Route 27 East toward Montauk without a few surf rods in the car. Then again, it felt strange driving into Montauk on February 28, but, as Captain Bobby Schroeder of the Viking Fleet said, “There is no ‘fishing season’ in Montauk. Out here, the fishing never stops.”

Codfish are the primary target in Montauk during the late winter, but as spring approaches, the Viking Fleet adds another trip to their schedule—deep-dropping for tilefish and other open-ocean bottom dwellers.

Despite it being bitter cold while loading my gear onto Viking Star for the 11 p.m. departure, the conditions couldn’t have been better for a ride offshore. Calm winds and flat seas made the ride a breeze, and after chatting with some of the other fishermen while rigging up, I found a bunk and napped for most of the ride out.

We reached the first drop right around sunrise, a patch of rough bottom near Block Canyon. I looped a 32-ounce bank sinker on, baited up with clams and squid, and dropped the rig some 550 feet to the bottom. 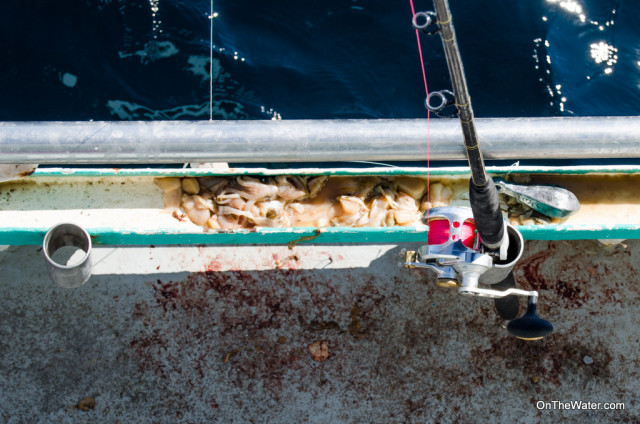 I saw the March 1st 24-Hour Tilefish Trip announced on the Viking website early last week, and it looked like the perfect escape from the winter monotony. After securing a spot on board, I didn’t have much time to put together gear and rigs, so I took my cod-fishing rod, matched it with a tuna-jigging reel and spooled the whole thing with 300 yards of 80-pound-test braided line.  After I added 20-feet of 80-pound-test mono shock leader, I began making rigs. I dismantled a few pre-tied cod and fluke rigs, harvesting their squid skirts and glow-in-the-dark beads. After making a long top-and-bottom rig with 80-pound mono, I attached 8/0 striper chunking hooks to the rig’s dropper loops and tied it to the rod.

Most of the fishermen on the boat had similar rigs, but instead of using dropper loops, they attached the hooks with leaders tied to heavy-duty three-way swivels. Fortunately, rigs and lead—along with hot meals and snacks—could be bought on the boat.

As my rig was still dropping, the fisherman next to me, Matt Ketcham, who works aboard the Prime Time III out of Orient, was already fighting a fish. Some fishermen used electric reels to bring the rigs and fish the long way to the surface, and by the end of the trip, when my arms were toast, electic reels began to look pretty appealing.  It took Matt several minutes to reclaim his line, but eventually, the outline of a fish appeared below the surface. By this time several fishermen were hooked up, so I waited anxiously for my turn. When Matt’s fish reached the surface, he identified it as a barrelfish—a blunt-nosed, big-eyed deepwater dweller. Barrelfish are so-named for their tendency to hang under floating objects (like barrels) as juveniles.

My first bite came shortly after. I swung the rod and it doubled over as something, two football fields below me, tried to get back to the bottom. A few minutes later, I had a barrelfish of my own on deck. Before I could re-bait, Captain Steve Forsberg Jr. called for lines in as he reset the drift.

On the second drift I hooked up shortly after my rig hit bottom, and this fish was much more reluctant to come to the surface.  Three times I lifted it from the bottom, and three times it ripped line off the reel as it returned to the wreck. By the time I was making headway on the fish, I was actually sweating. I ditched my gloves, jacket and winter hat—if the fight went on for much longer, I might have stripped down to a t-shirt and shorts. With my arms burning, my first wreckfish circled into view.

Wreckfish look like prehistoric largemouth bass. They have short, fat bodies, huge mouths and giant eyes. And they fight like crazy. Wreckfish grow larger than 100 pounds, but the biggest specimens live in much deeper water. Most caught during the trip were between 10 and 15 pounds.

Several other wreckfish came over the side before the captain reset the drift. On the third drift, more barrels and wreckfish hit the deck, but by the fourth drift, only eels and dogfish came up, signaling it was time to move.

Captain Steve motored the Viking away from the rough bottom and set up over a muddy bottom in 800 feet of water—the tilefish grounds. It didn’t take long for the first golden tilefish to come aboard. I was struck by how beautiful the fish was with its yellow-flecked scales and blue tinted eyes.  A number of big hake and tilefish came on board, but Captain Bobby Schroeder said the tilefish bite was a little off.

We stopped at the rough bottom at the end of the day, where the anglers caught more wreckfish and the pool-winning tilefish. The mates worked hard cleaning fish on the way home, and everyone on board brought home some fillets from delicious deepwater fish.

The Viking runs tilefish trips through the spring and summer that last anywhere from 24 hours to three days. That’s plenty of reason to head to Montauk long before the fall striper run.