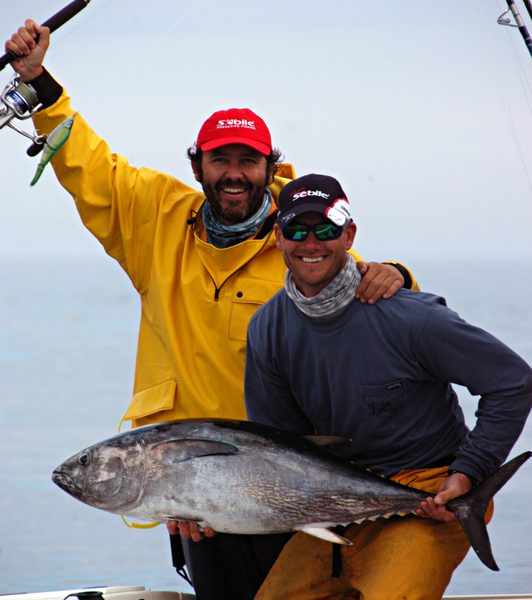 After slow fishing for most of June and July, reports of bluefin tuna along the backside of Cape Cod from Crab Ledge east of Chatham up to Peaked Hill Bar off Truro have picked up in the past few weeks. We took advantage of perfect weather on Thursday, August 2 to check out the bite.

Russ Stevens, a sales manager for Navico (the parent company of Simrad and Lowrance), invited me and OTW publisher Chris Megan to fish aboard a beautiful 25 Contender decked out with the latest in Simrad electronics and wrapped with a pretty sweet striper scale pattern.

We left from Pamet River in Truro in the early morning and were greeted with still conditions, an extreme low tide, and thick fog.

At 6 a.m., the fog was thick from Pamet all the way around Race Point. After we came around Race Point at the very tip of Cape Cod, we stopped among the lobster pot floats in about 40 feet of water to prep the tuna gear – Van StaalVSB250 spinning reels on VS jigging rods, rigged with 80-pound-test braided line and 80-pound test wind-on leaders. 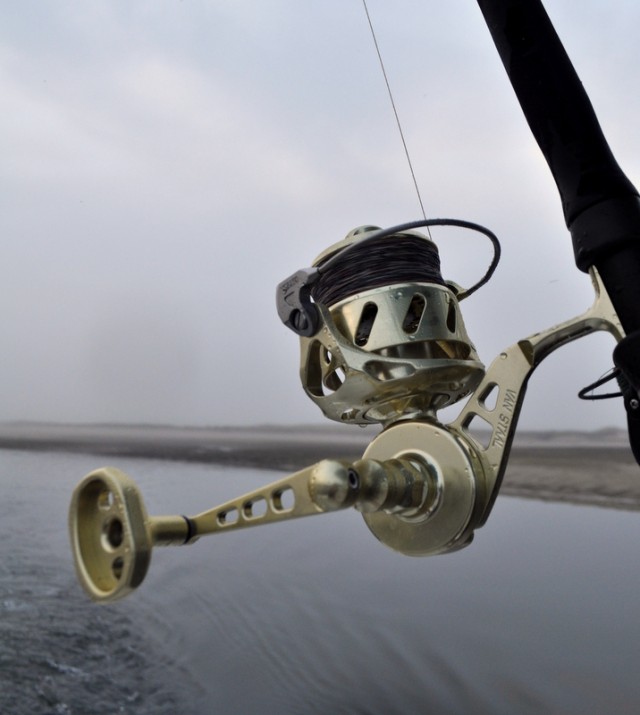 There were bluefish breaking around the boat on small sand eels, so Russ made a few casts with a Guide’s Choice topwater popper on one of the light-tackle striper outfits. 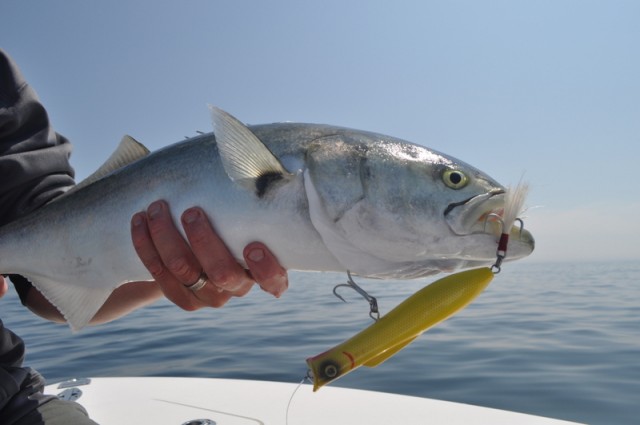 After Russ caught a couple of  bluefish, we were all watching the plug chug along the top, waiting for a topwater strike, when suddenly a huge boil appeared behind the plug and the top fin of a bluefin tuna showed for a split second before the fish turned and disappeared in an explosion of whitewater. The tuna never hit the plug, but it was for the best as I’m not sure we would have had a chance of landing that fish on striper gear among all those lobster pots!

Most boats off Peaked Hill Bar were trolling squid bars or fishing live bait, but we were determined to cast to some tuna after watching that blow-up on the striper plug. We made our way south toward “the golf ball” and made a big loop out toward the shipping lanes, but spotting any signs of life was tough as big banks of fog kept rolling through. We relied on the radar to avoid boat traffic and kept an eye on the Simrad fishfinder to look for signs of fish and bait. Russ was happy to show off all the great features of the intuitive Simrad touchscreen display. 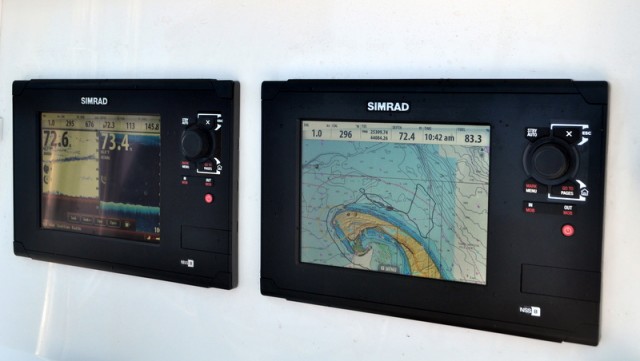 Finally we made the call to head back toward Peaked Hill Bar and troll some Sebile Magic Swimmers and rigged Hogys on the spinning gear. The fog had cleared, and we started spotting signs of life – minke whales in the water, bait dimpling on the surface, and a few groups of sea birds.

Occasionally we’d see a few tuna break the surface, but they never stayed up long enough to allow for a cast. Finally, after trolling through an area where we had spotted some tuna, I put the boat and neutral and picked up one of the spinning outfits to check and re-set the lures. I was working the Magic Swimmer back to the boat when suddenly it got hammered. For a split second I thought a bluefish had grabbed it, but then suddenly the fish turned and started ripping drag at a speed that could only mean tuna. After chasing the fish through some lobster pot lines, we were able to stay on top of it and get it in the boat quickly. The fish was only 40 to 50 pounds,  but it was the first tuna I’ve ever caught on a plug and it was awesome to feel it bite.

The plug that the fish hit was the exact same one that Patrick Sebile himself, the inventor of the plug, had used to catch a tuna while fishing with OTW and Capt. Brian Patterson 3 years ago – no doubt it had some good mojo. Check it out in this photo from 2009: 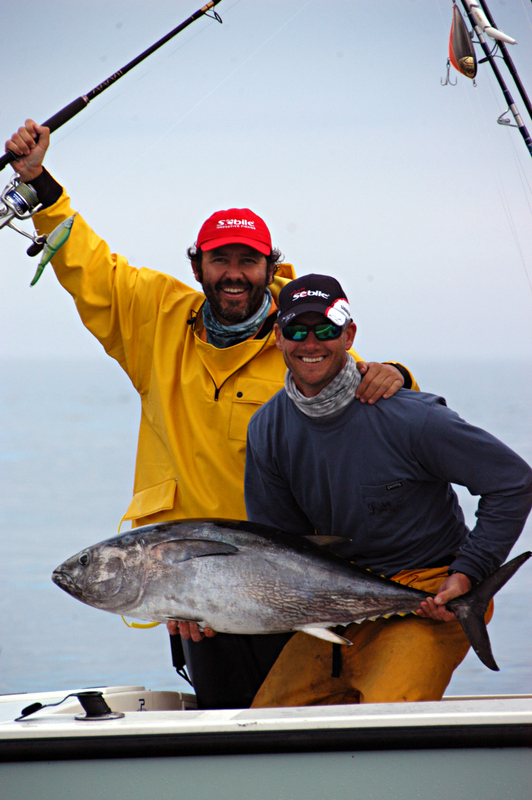 After a quick photo session, it was time to get the tuna gutted and on ice. 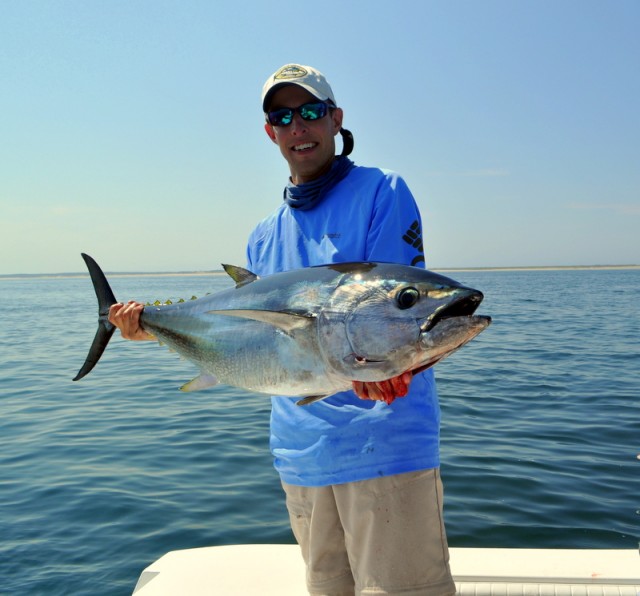 After another hour with a few shots at breaking fish but no luck, we decided to call it an early day and head home. I had big plans for the bluefin meat.

If you’re interested in learning to cut your own tuna for sushi, check out these helpful videos I found on You Tube: 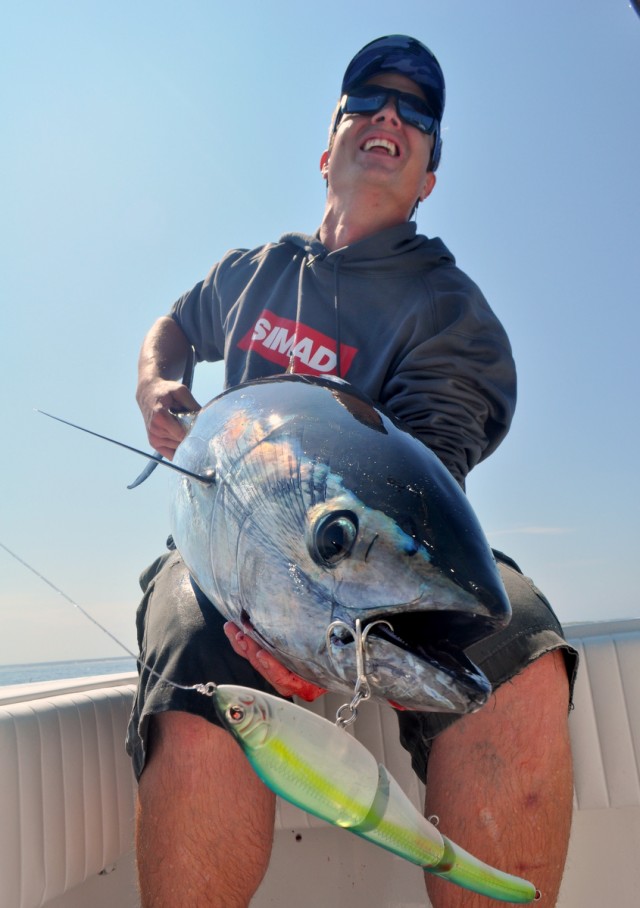