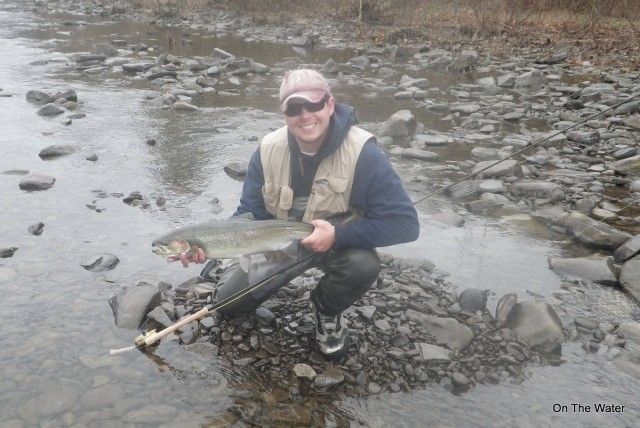 Steelhead and stripers, as my two favorite fish to catch, have almost perfectly opposite seasons. When striper season on the Cape is winding down in late October, the steelhead are revving up their fall salmon-egg feeding binge. By the time the steelhead have completed their spawn and are dropping back to Lake Ontario in April, the stripers are working their way up the coast again.

This weekend, I made what will be my last steelhead trip until November. Over the winter, I picked up a new 7-weight fly rod specifically for steelhead. The fly rod would give me access to the productive (albeit frequently crowded) fly-only sections of the Salmon River in Pulaski, NY.

My goal for the weekend was simple. Catch my first steelhead on the fly.

By the end of the day Saturday, it looked as if the goal might go unfulfilled until November. The water dropped from 900 cfs to 500 cfs the night before I arrived. As one fisherman put it, it’d be like having the ceilings in your house lowered to half their height. This, understandably, put the fish on edge. The crowds of anglers walking through the now wade-able waters where the steelhead were holding didn’t help things either. While I saw plenty of steelhead on Saturday, and a few caught, the bite overall was tough. I hooked six, three of which came on successive casts when I found a pod of undisturbed and willing-to-bite fish in a small side creek. All of them made for a logjam and freed themselves, heading downstream with a new lip ring.

Sunday, the Upper Fly Fishing area — an area that has been closed to fishing since December — reopened. Fish that have been wintering there had not seen a fly or fisherman for four months. I liked my odds. But, listening to a tackle shop employee about how dreadful the crowds would be, I allowed myself to be talked out of fishing the Upper Fly Zone on Sunday morning. The tackle shop employee, I’m sure, was trying to be helpful, telling me I should steer clear of the “zoo” that would certainly be taking place. After an hour of fruitless flailing in the mid-river spot he recommended, however, I booked it to the Upper Fly Fishing area.

The scene there was crowded, without a doubt, but everyone gave each other a respectful distance. When I walked down, one angler was fighting a big male, and all the downstream anglers courteously gave way. The scene was much better behaved than a morning blitz at the Cape Cod Canal in June, where the other fishermen would have been casting over the head of the guy fighting the fish.

I found an opening at the bottom of a long pool, just above a set of rapids. I was just hoping to find enough space to squeeze in and cast, but as luck would have it, this was the hot spot. The angler downstream of me told me that the fish were moving into the pool in groups of threes and fours. Right in front of us, adense logjam and gravel bar formed a choke point so that all the steelhead moving into the pool would have to pass in front of us. I put on an indicator and an egg imitation and began fishing. The angler downstream of me hooked up four times before my indicator dropped and shot upstream. I flicked my wrist to set the hook, and I saw the fish flash as I raced to clear my fly line and get it onto the reel. Before I could do that, the fish aired out, a big male with heavy shoulders – 15 pounds if he was an ounce. He shot upstream, jumped again and the fly dropped out of his lip. 0 for 1. A couple casts later I’d hook up again briefly and lose the fish. 0 for 2.

But the next time the indicator sunk out of sight, the fish stayed on. The long limber fly rod cushioned the light tippet, even when I clamped down on the reel to keep the fish from going down the rapids. A couple runs and a couple jumps, and I was backing my first flyrod steelhead onto the rocks. It was a spawned out female with nice colors, and after another angler was kind enough to snap a picture, the fish went back on its way.

The day continued like that, and my final tally was 7 for 14. The highlight was a long spawned-out male that I couldn’t keep above the rapids.  I high-stepped down the rocks, and eventually guided the fish into an eddy for a couple shots before sending him back.

The steelhead are already leaving for the lake, but there’s still a couple weeks left if you want to go give it a try. If not, they’ll be back in November. And so will I.