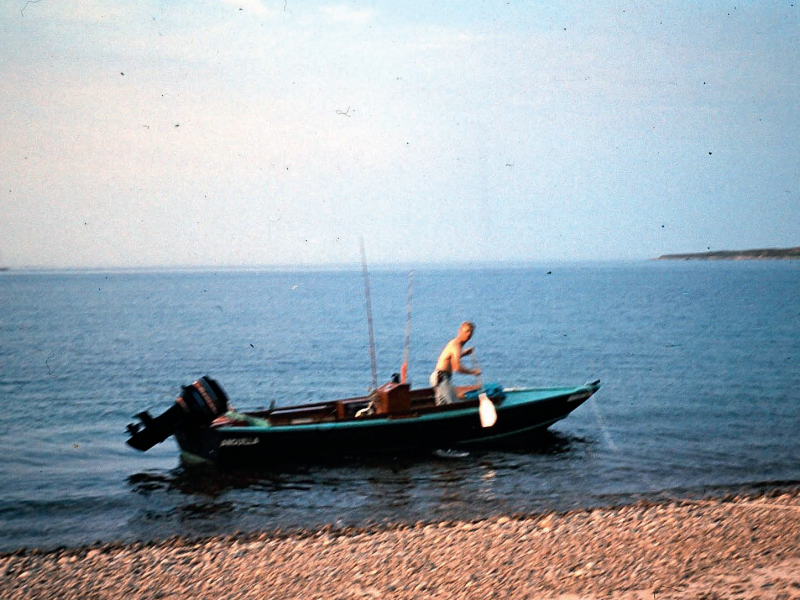 Someone can strap twin 250s on the back of a seaworthy 26-foot center console and head for the canyons, but you won’t get me aboard. Back when gasoline was three gallons for a dollar, any venture south of Nantucket or Nomans was a voyage, not a trip. We fished in big, heavy, seaworthy wooden boats that cruised at 10 or 12 knots, so we left the harbor several hours ahead of time to arrive on the grounds before dawn. When those boats were built, they were never intended to steam that far, so we carried Jerry Jugs containing 30 to 80 gallons of fuel on deck. Everyone, including this then-16-year-old boy, smoked cigarettes, which essentially put us on what one leather-skinned harpooner referred to as a “floating bomb.”

We didn’t have to run to the canyons to find action because the offshore fishing, which back then could be as close as 30 miles from the beach, was pretty darn good. The Sakonnet fish traps, primarily the sets off Newport, routinely corralled giant tuna (which caused tremendous damage to the gear), white marlin, and the occasional wahoo. In fact, Captain Dave Brayton once harpooned a swordfish over 300 pounds off Newport within two miles of shore on a bright summer morning.

Xiphias Gladius, a 32-foot custom-built Brownell sportfishermen crafted for Brayton and designed for swordfishing, sported a hard chine hull and an A-frame tower that was a marvel of technology and New England craftsmanship. That boat cruised between 10 and 12 knots, but she was one of the most handsome, seaworthy, and successful harpoon boats of her day. Another boat I reluctantly crewed on was an overbuilt 35-foot round bilge hull that rolled like a beachball in the wind in a beam sea. Her skipper could seldom muster a crew because he suffered from “BBC,” which was not an acronym for a British broadcasting network but a truncation meaning not being able to hit a bull in the backside with the barn door closed. I never saw him stick a sword with a harpoon and can’t recall him returning to the harbor with a fish onboard unless he bought one from another boat. Trips aboard that vessel were long, uncomfortable journeys without a single swordfish steak or a few bucks in crew share for our efforts.

Without the benefit of today’s accurate weather forecasts, we scrutinized conditions and, based on what was available, sailed for our intended destination. On one trip, we watched the weather deteriorate as two other boats from our port approached us to suggest we head for home. Those boats each had two swords on deck, and we had missed three fish in four hours. Against the better judgement of the crew, the desperate skipper continued to fish. As conditions worsened, I became trapped in the crow’s nest because it was too treacherous to climb down. By the time we reached port, I needed assistance to reach the deck and was black and blue from my buttocks to my belly for the next two weeks. It was my last swordfishing trip aboard that boat.

My first trips to Nomans were with Ernie Rogers in his homebuilt 20-foot bass boat, the JUDY. It was 23 miles from Sakonnet Point running a converted automobile engine that sipped fuel and never faltered. We went there for bluefish and found stripers, big stripers. They looked like huge brown logs as they followed our homemade popping plugs all the way to the boat without striking. Those lures were crudely constructed mahogany plugs turned down, lightly sanded, and fitted with single-hook bucktails. They were strong enough to land alligator blues up to 20 pounds, although after a few fish, the bucktails were a fond memory.

In 1968, from plans I modified along with frames I obtained from a builder who had constructed big, seaworthy boats in the Banks dory style, I built a 19-foot plywood-over-oak skiff. I routinely ran the 13 miles to Cuttyhunk and fished Vineyard Sound for fluke and black sea bass, but all the while, I wondered if I could make an early-morning trip to Nomans and return before the afternoon breeze kicked in. I was reluctant to run the entire 23 miles of open and unprotected water directly to Nomans, so I went inside of Cuttyhunk, cut through Canapitsit Channel, and fished along the south side of Cuttyhunk, testing the action and weather.

One warm pre-dawn morning, my friend Andy and I had not raised a single fish from Barge Cove to the Three Rock Pool, so just as the sunrise began to illuminate the multicolored clay of Gay Head cliffs, I took off for Nomans over a glass-calm sea. We headed outside the north end bell and up to the southwest corner where a zephyr of a southeasterly wind was just enough to push us along the rocky shoreline. As usual, the water was crystal clear, much too clear for my liking, but while I was preparing the grapnel and readying the gaff, I heard Andy say “Whoa.” A big fish was following his red-and-white swimmer and just as I was about to tell him to jig the rod tip, the fish exploded and clamped its jaws on the forward treble. First cast, first bass; what a way to begin the morning.

We had nine fish from 15 to 25 pounds in the mid-ship fish box with the excess under canvas on deck when, against the protestations of my partner, I felt it was time to leave. I was tempted to head directly to Sakonnet, but I ran east and headed inside Gay Head and into Menemsha Harbor. Despite the fair treatment and much-better-than-mainland prices, I was always reluctant to sell at Menemsha because of all the eyes on us when we unloaded fish onto the dock. There were a few commercial rod-and-reelers who tied up there, and word of a good catch spread fast in that island community. One employee there told me that almost none of the rod-and-reel fish brought into their shops were ever shipped off-island, which was the reason for the better prices. Most of the day-boat catches ended up in island homes, markets, and restaurants, such as my favorite, the Homeport, at the head of that harbor.

We did bring the occasional enormous blue back to the Linesiders Club to weigh in our bluefish derby. However, once we began weighing teen-sized blues, we again became marked men. One trip to Nomans began with a 4:00 a.m. departure with a man who was looking to win his Rhode Island club’s bluefish derby. I steamed the entire 23 miles from Sakonnet to the center pocket on the island’s west side and my deckmate’s first cast won him a handsome 14-pound striper. I don’t think I’d ever seen anyone more disappointed about catching a keeper-sized striper on an artificial lure.

The bass were in heavy that day, which pleased me to no end, and although the Rhody man’s plugs were more productive than my own, the only blue he hooked was a 5-pounder. Although I was nervous about a midday breeze kicking in, I headed up around the tip of the island to fish the gnarly southeast corner. My passenger’s first cast into a pocket of boulders produced an eruption as an outsized blue with the head of a giant mahi swallowed the big swimmer from tail hook to the belly treble. We never saw a blue of that size put on such an aerial show, but in water less than six feet deep, it had no other place to go. Things were nip and tuck, with several head-shaking runs as the fish charged the boat, which I had in reverse to pull us away from shore and get the blue into open water. It was a good five minutes before the huge chopper was close enough to slip my long bamboo gaff, with the big tuna hook, under it. The fish came aboard, and I was amazed that it was able to fight that long and hard with the big swimmer solidly hooked almost down to its gills. That fish scaled 16 pounds and topped the second-place blue in his RI derby by almost 5 pounds. I made a few more direct trips to Nomans – one an early fall day when I made landfall and spotted two Vineyard anglers anchored up and chunking right atop my intended location. I was not about to leave without fishing, so I trolled tubes off the north rip near the bell. I put together a respectable catch of stripers in the 12- to 18-pound class, along with a few 6-pound bluefish that were puking up squid all over the deck.

A week later, we arrived to find two 13-foot Whalers working my favorite haunts: one with three kids aboard and the other with the two men who had chatted me up the last time I sold fish in Menemsha. It was then that I realized those 23-mile voyages had come to an end. The following year, I moved my operation to Padanaram Harbor and began fishing the Elizabeth Islands almost exclusively.

Even with the bluefish resource in trouble today, I bet I could fish the island this August and put together a catch of blues and bonito, along with a couple linesiders that favor that habitat. All good things soon come to an end, so we just have to pick up and soldier on. It’s the same with Facebook and fishing. The more successful you become, the more followers you accrue.