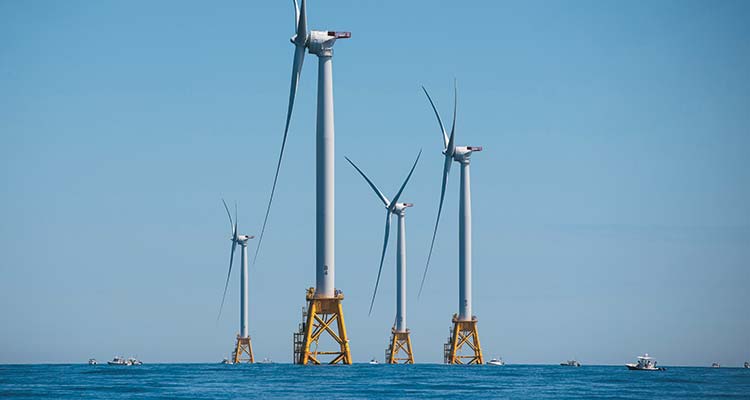 Above: Photo by Trevor Holden Photography

The Block Island wind farm pilot project is a fishing hotspot—and it’s answering questions about the future of wind farms off our coast.

The first ocean wind farm in the United States became operational in 2016 near Block Island, Rhode Island. The five-turbine wind farm three miles south of Block Island is an important pilot project for the developer DeepWater Wind (DWW), the state of Rhode Island, the East Coast, and the nation. The intent is to learn everything we possibly can about ocean wind farm development from this project because thousands of turbines are planned for the East Coast. The social impacts of ocean wind farms are being studied by scientists, including their impact on tourism, property values and people. And, of course, their impact on the environment, fish and fishermen is being studied, too.

The Block Island wind farm, and other wind farms in various stages of development, can have positive impacts on fish and fishing—but only if they are strategically placed and planned with input from the scientific and fishing communities working directly with developers.

Many anglers, including me, fished the Block Island wind farm this year with very good results. Summer flounder (fluke) and black sea bass fishing in the wind farm area in the summer was arguably the best it has been in a long time.

Fishermen have compared the wind farm to oil platforms in the Gulf of Mexico, which have had a huge positive impact on fishing. In the Gulf, oil platforms have created structure for bottom fish and brought pelagic game fish closer to shore.

Captain Chris Willi of Block Island Fish Works Charters has fished on Block Island for over 25 years. Willi said, “Build a bridge or a wind farm and it is structure that is going to build life. It’s the basis of a food chain. There’s already a two-inch layer of mussels on the pylons, which will bring in crabs to feed. Baitfish will feed on the crabs, and then larger fish will feed on the smaller fish. It’s all a food chain.

“When we vacationed in Venice, Louisiana, the fishing was fantastic, and it’s all attributed to the oil platform structure. I wouldn’t doubt it if, in late august with 70-degree water, we start to see mahi out at the Block Island wind farm.”

Captain Jack Sprengel of Rhode-Island-based East Coast Charters said, “The wind farm is a good thing for our fishery, creating current breaks and more food for species like tautog, black sea bass and others. The beauty is that trawlers can’t hit the areas under the windmills so these spots will attract fish for rod-and-reel fishermen. You might say these pylons will be like the rock piles we all search for out there – they will aggregate fish.”

“This is structure, but a different type than we are used to,” said Bob Murray, a commercial rod-and-reel and recreational fisherman. “They are sixty- to ninety-foot vertical columns of structure, which is something positive for fishing. In 2016, fishing for fluke and black sea bass was good on and off in the wind farm area. Perhaps, once there is more growth on the structures, they will attract tautog and cod.”

Questions Remain About Effects On Fish And Fishing

One of the biggest questions about wind farms and the structure their towers create is whether they lead to an increase in the local fish population or are they drawing fish from other areas and creating added fishing pressure. For example, fishing was good at the wind farm this summer, but the fishing off Point Judith and Newport, where historically there has been a great fluke bite, was not. Did the wind farm aggregate fish that otherwise would have moved inshore? And, will the added fishing pressure in the windfarm area have any long-term negative or positive impact on fishing?

On any given day before construction, there were 10 to 20 boats fishing the area; this summer, there were as many as 75 to 100. With so many boats fishing there, the impact of added pressure remains a question. Some argue that the wind farm might be attracting fishing efforts away from other areas, reviving spots that traditionally are fished hard by anglers.

“Everyone really pounds the Southwest Ledge and the south sandbag areas for fluke; now, they can fish the wind farm too. So, I think it will spread out the fleet,” said Willi.

Inspire Environmental of Newport, Rhode Island, has been hired to conduct independent trawl surveys in the wind farm location. The aim of the survey is to see if there is a change in fish abundance before, during, and as far as two years after construction and operation.

To date, there have been no major negative impacts identified by trawl surveys, but fishermen are interested to see what happens when the farm has been operational for a prolonged period. A separate lobster survey is underway as well. Local fishermen are being used in the surveys and all fish caught during it are being donated to a local food kitchen.

It was five years ago when I wrote my first articles about the pioneering work the State of Rhode Island was doing with ocean spatial planning (zoning the ocean) for possible uses such as wind farms. At the time, DWW was holding informational meetings for the fishing community. Since then, there have been many more meetings. In 2013, at an informational meeting in Newport, Rhode Island, Aileen Kenney, vice president of permitting and environmental affairs for DWW, reviewed the permitting and approval process.

The list of agencies that needed to review, approve or give a nod to the project was endless. This was a pioneering effort, so fishermen, environmentalists, and town, state, and federal agencies left no stone unturned. The project was reviewed by the Army Corps of Engineers, NOAA, BOEM, FAA, RICRMC, RIDEM, and a host of others.

Kenney also related the list of creative mitigation initiatives they were exploring at the time with the fishing community. These included the establishment of a fishing community liaison; funding of the executive director position at the Commercial Fisheries Center of Rhode Island; funding of a third-party fishing liaison to address issues during and after construction; funding of a for-hire (charter and party boat) industry marketing initiative; and spending over $1 million for trawl and lobster surveys before, during, and after construction, and during operation. (She explained that using local fishermen and a local research firm to conduct the research was important to DWW.)

Capt. Rick Bellavance, of Priority Too Charters and president of the Rhode Island Party and Charter Boat Association, was DWW’s first fisheries liaison. He went to the United Kingdom and then asked some captains from there come to the United States to talk about wind farms and their impact on fishing.

Capt. Bellavance said, “We took a ride out with a charter boat to visit the farm and I got to talk with the captain. He mentioned scouring behind the bases due to high-speed currents. The silt would then cover the desirable habitat in the area, so his best success was fishing up tight to the turbines.”

This is an example of an unexpected consequence and points out how important it is to plan wind farms properly and use all the input we can from the Block Island pilot project to plan other projects.

Grover Fugate, executive director of the Rhode Island Coastal Resources Management Council, said, “During development of the Rhode Island Special Area Management Plan (SAMP), initiated in part due to wind farm development in Rhode Island, we learned early that building trust between the fishing community, government and the developer was key. Without this trust, fishermen could have easily sidetracked the project. With careful attention to communication and building a trusting environment, the Block Island project went through permitting in about a year. We have some other coastal projects that have been in permitting and/or litigation for nearly twenty years.”

Captain Bellavance said, “I felt the key was the relationship and direct line of communication we had with the developer. This direct communication was important—it did not go through fish managers with a chance of things being misinterpreted.”

A Responsibility For The Future

As a firsthand observer and fisherman who fishes the wind farm area, I think DWW has done a nice job obtaining community input, then planning and implementing the construction and operation of the Block Island wind farm. We now have a good case study of what to do, and not to do, when developing wind farms in the Northeast.

As fishermen, we should support ocean wind farms and other renewal energy resources while being diligent about advocating for the fish and the environment. We need to make the point that we see our planet suffering effects of climate change, with warming water altering habitats, raising sea levels, and forcing cold-water fish out of our area as the biomass of warmer-water fish like summer flounder and black sea bass move farther north. These are all changes we are experiencing due to climate change, and we should share these stories with those who do not fish.