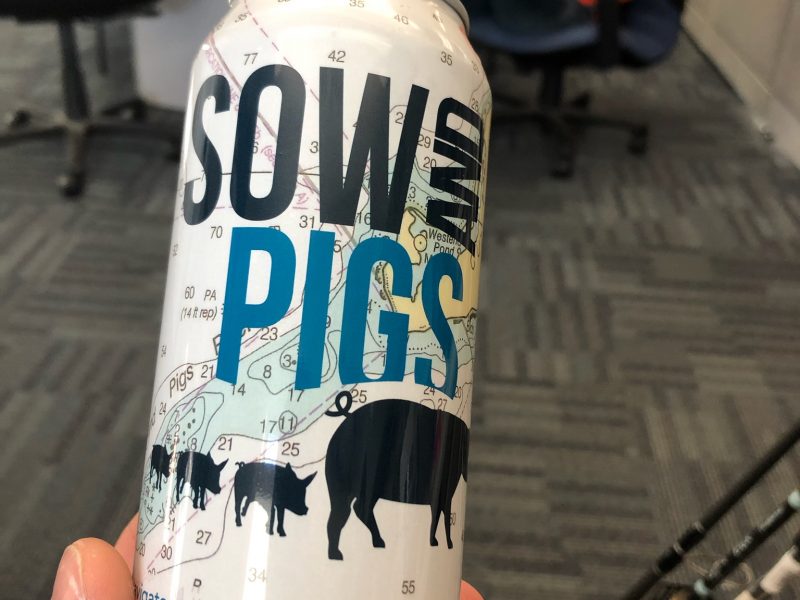 Sow and Pigs reef is one of the fishiest spots in the Northeast. This line of submerged boulders extends southwest from Cuttyhunk at the convergence of Vineyard Sound, Buzzards Bay, and the Atlantic Ocean. When the wind is up and the waves are crashing, it’s also one of the most treacherous places in the Northeast, which is exactly why stripers love it.

So, when I saw a beer named after this storied striper water, I had to buy it.  Sow and Pigs is a Kolsch-style ale crafted by Buzzards Bay Brewing out of Westport, MA. They offer the beer seasonally (though I found it in late February), and half of the proceeds benefit the Buzzards Bay Coalition, helping promote clean water initiatives in the bay.

The beer itself is light, crisp, and refreshing, but not what I was expecting from a beer named after that infamous reef. Sow and Pigs conjures images of foggy nights, breaking swells, and large stripers, so I was expecting a beer with a little more bite. As Kevin Blinkoff put it, the drink made him think of a day of fluke fishing on Lucas Shoal, not a night of striper trolling at Sow and Pigs reef.

But, overall, the beer rated high among the OTW staff, scoring 6.63 on a scale of 1 to 10 of how likely they would be to crack a Sow and Pigs while fishing on Buzzards Bay on a summer afternoon.