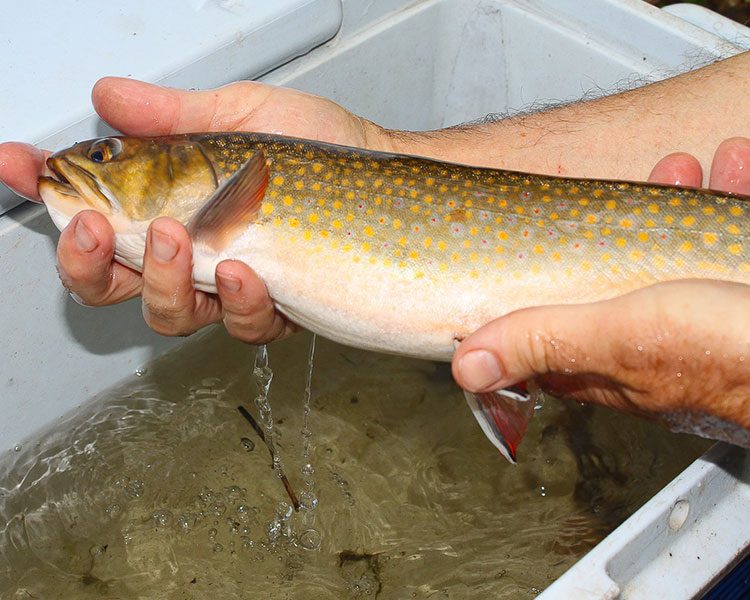 When most people think of fishing on Cape Cod, they conjour up images striped bass and bluefish, open beaches and blue water. But Cape Cod also has several river systems that harbor wild brook trout, and state biologists are keeping a keen eye on them.
I recently had the opportunity to tag along with Steve Hurley on an electroshocking survey on the Coonamessett River, and I was delighted to find that its native brookies are thriving. Steve is the Southeast District Fisheries Manager for MDFW, and he has gained a wealth of knowledge on these majestic fish. 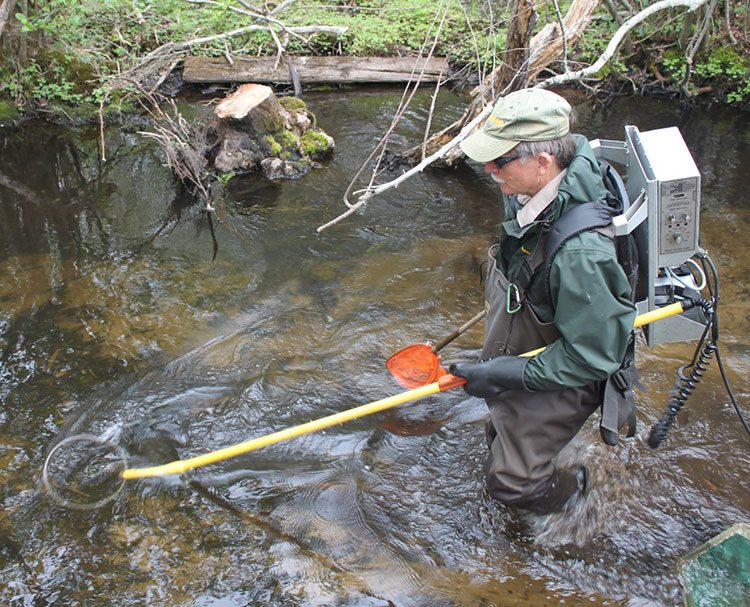 We entered the river, and Steve fired up “the shocker.” The device reminded me of the backpacks they wore in Ghostbusters. 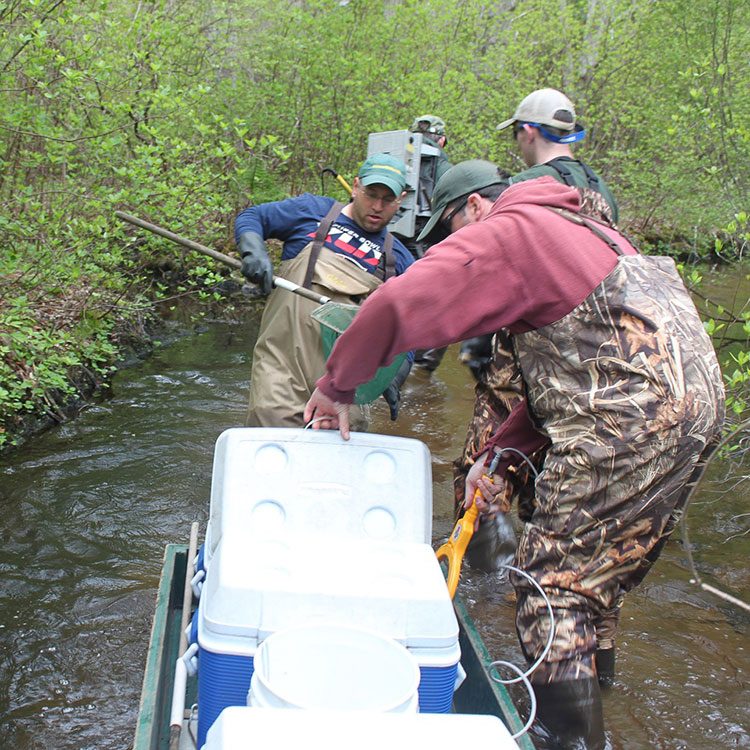 Steve’s crew followed along behind him, towing a homemade, makeshift barge that carried their gear. Once a fish is succesfully shocked and netted, it is placed in the appropriate holding cooler on the barge. 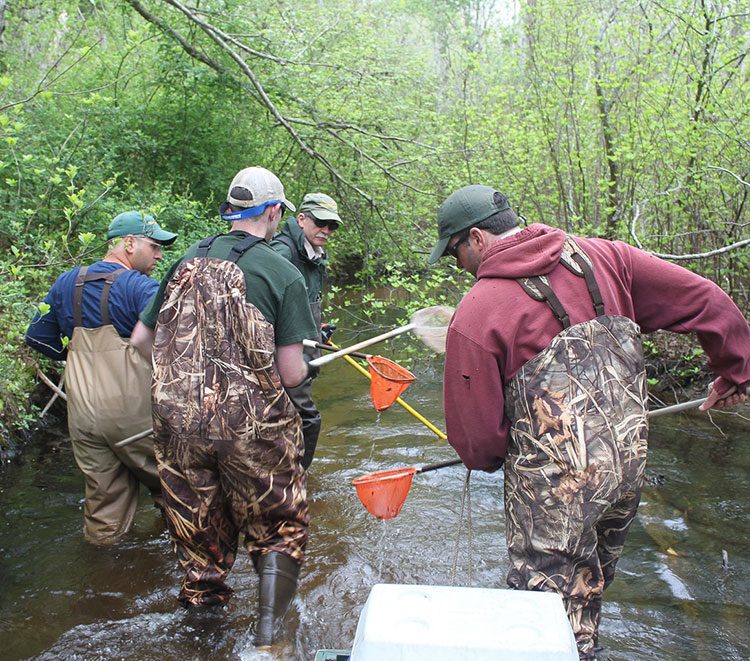 When is fish is shocked, it is temporarirly stunned and rises to the surface. They recover quickly, though, so the team had to work fast to net the fish. The scene reminded me of my childhood, where one of my favorite pastimes was mucking about, catching critters with a dip net. 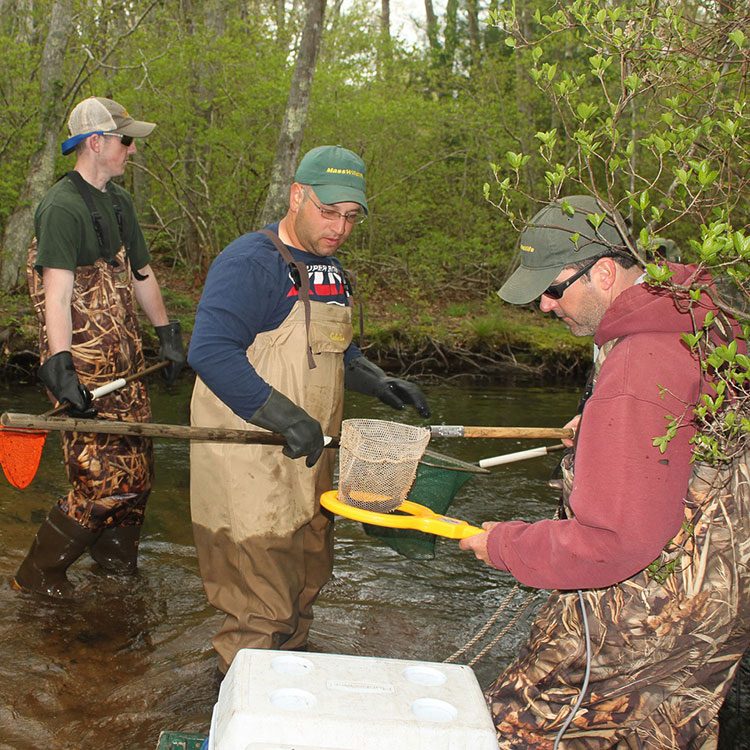 When they captured a larger specimen, they would quickly check it with a handheld scanner to see if it had been previously tagged. If it had, it went into a specific holding cooler. From left to right: Intern Mike Clark and MDFW technicians John Garofoli and Steve Wright. 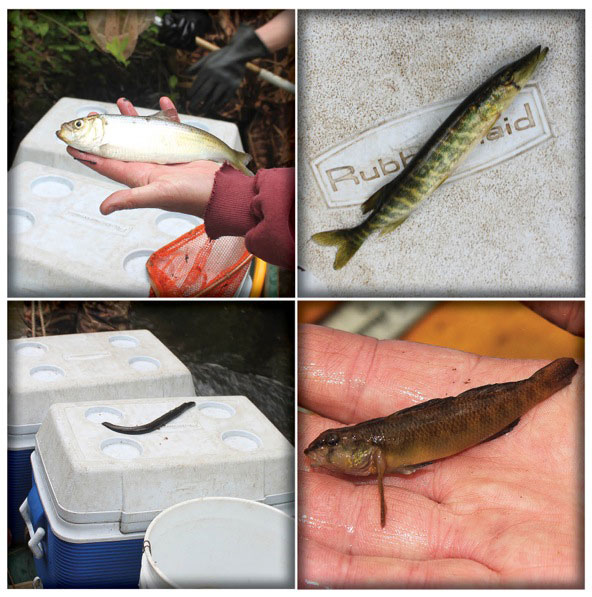 Brook trout weren’t the only fish to show up in the survey. Alewives, a small chain pickerel, American eels, and several tesselated darters were also captured. All of the fish were released alive and in in good condition. 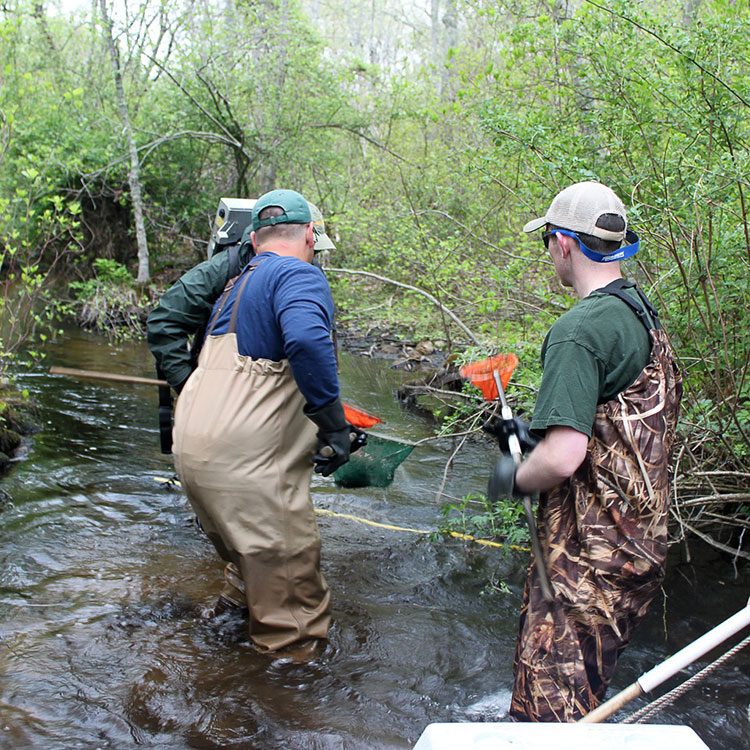 Several hundred feet up stream I saw a large fish hit the surface, and Steve began frantically yelling “Big net, big net, GET THE BIG NET!” His crew worked fast, and came up with our largest specimen of the trip. 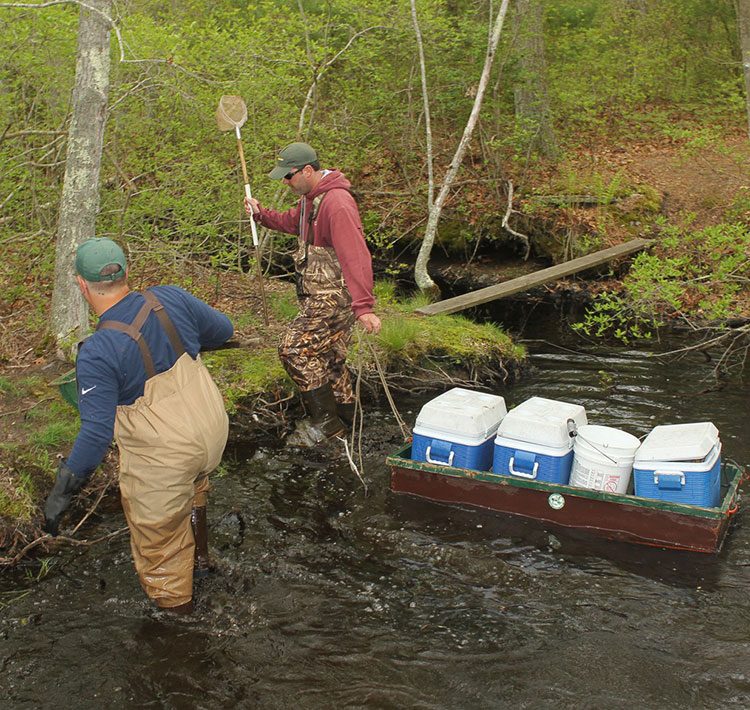 After about 20 minutes, the crew set up camp on the river bank, and recorded data on the native trout they had captured. 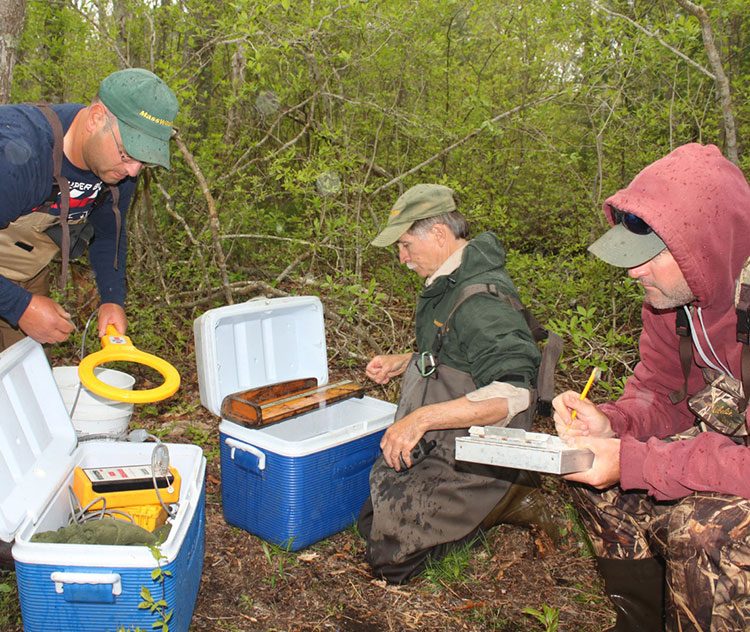 A makeshift lab was set up. Any fish that had been previously tagged was carefully measured, which gives them a good overview of how fast they are growing. Steve noted that the growth rates in the Coonamessett River are quite impressive, and are close to those seen in the state hatcheries. This means the trout are feeding well, and the river offers suitable habitat for their survival. Eleven of the fish they caught that morning had been previously tagged. 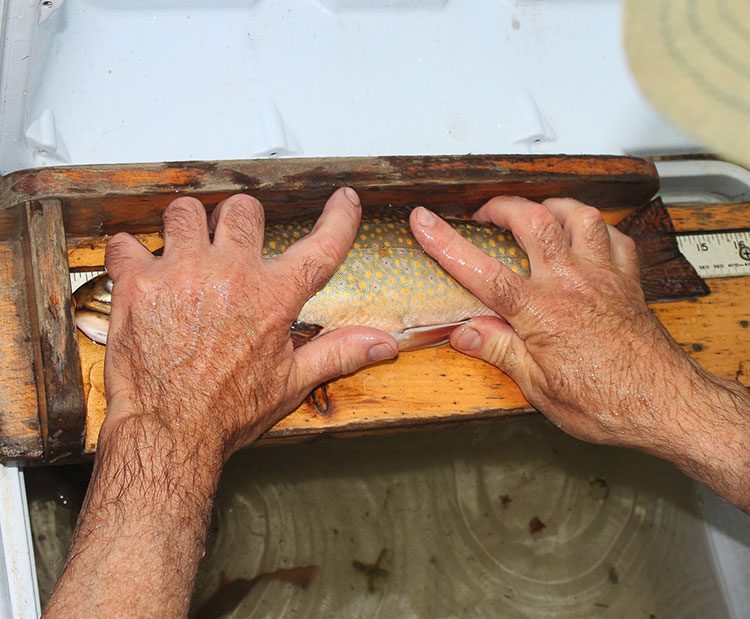 This was our largest fish of the morning, it measured 15 inches. I was truly impressed to see a trout this size in the small river. This fine specimen was a native wild brook trout transplanted from the Mashpee River (it was 13.5 inches when it was transplanted on June 6, 2014 and grew 1.5 inches in just under a year). This trout was probably at least 4 years old which is a ripe old age for a wild brook trout. 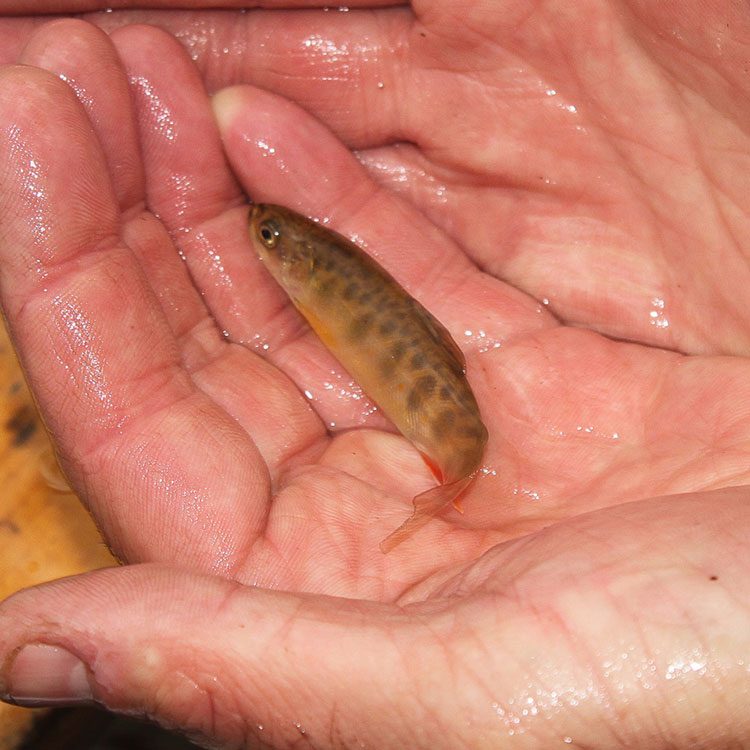 Most of the trout captured were quite small, like this little guy, and measured under 3 inches. This is a good sign and means the fish are reproducing naturally. 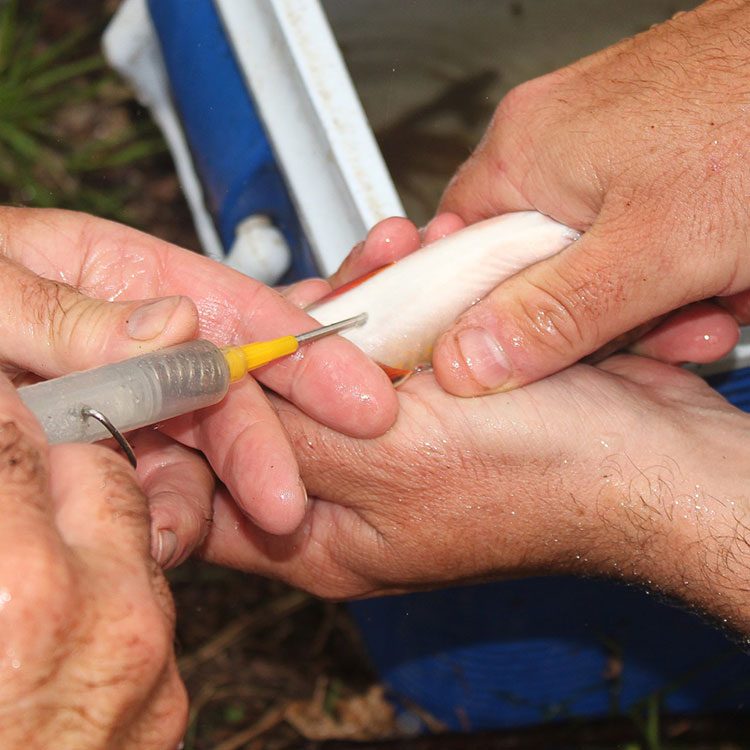 Any fish larger than 3.5 inches was implanted with a miniscule chip. It’s length and chip number were carefully recorded, and they were then released. 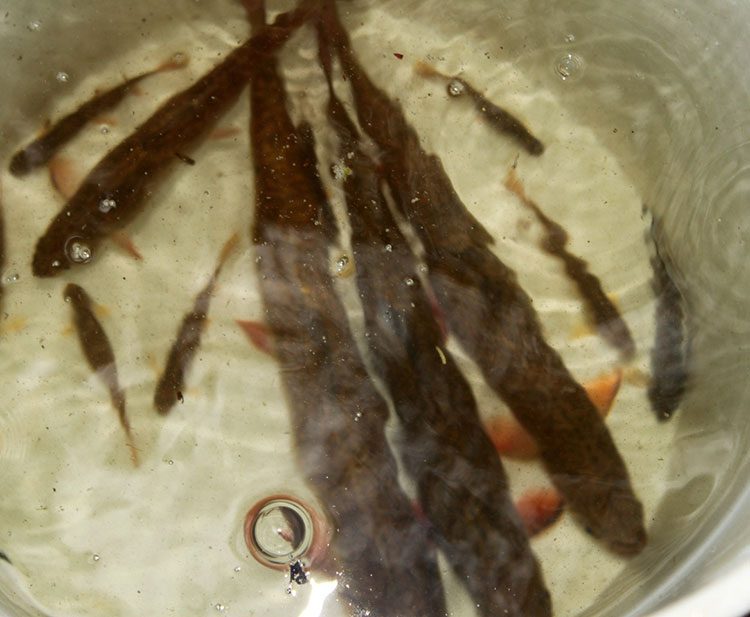 Before getting rained out, Steve’s crew captured 41 trout, including 11 recaptures. They tagged 14 untagged trout and measured 16 young-of-year. I was amazed to see so many healthy fish in the river. I had always known they existed there, but never imagined there were so many.

It has the potential to be a true success story, mainly do to the hard work and vigorous efforts of Steve and his fellow biologists. Perhaps some day native brook trout will regain their foothold in Cape Cod’s freshwater rivers.