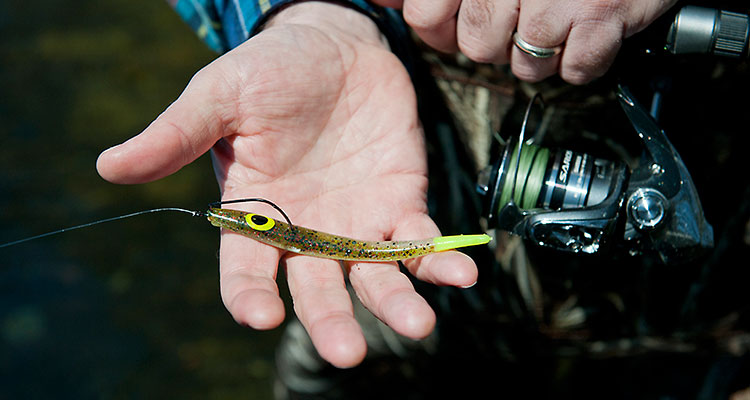 You’d be forgiven if, on first sight of the YUM Swurm, you think to yourself, “It’s just another stickbait.” Since the Lunker City Slug-Go hit the market in the 1980s and created the category, there have been a number of soft-plastic stickbaits made in its image. While the durability, hardness, details, and finishes of each of the imitations vary, most keep the same general long and thin stickbait shape.

A second look at the YUM Swurm reveals a shape and suppleness that sets it apart from other soft plastics on the market. The Swurm is best described as a hybrid; it has the long, tapered shape of a stickbait, but its overall shape and action is closer to that of a soft-plastic jerkbait or fluke-style bait. Instead of being vertically compressed—deeper in body than wide across the top—the Swurm is flattened, wider than it is tall along its length. The result is a slower sink and a natural glide, especially when rigged weightless with a swimbait or offset worm hook. Combined with its supple plastic construction, it has a fluttering action when sinking and a kicking action when twitched, both when rigged swimbait-style or on a jighead.

Since its introduction in 2014, the Swurm has been a favorite with freshwater bass fishermen. The smaller, 4.75-inch Swurm is popular as a finesse bait rigged on a light jighead and retrieved with a slow swimming and twitching action or dragged with a slow, almost deadstick-like retrieve that allows the slim, tapered body to quiver. It is also effective on a Carolina rig or split-shot rig. The larger, 6.25-inch Swurm is more popular as a big-fish swimbait, rigged weedless and twitched or walked side-to-side through weeds and heavy cover.

Saltwater fishermen in the Southeast have also found success with the Swurm, and it has caught on with inshore fishermen targeting snook, seatrout and redfish. Thankfully, the folks at YUM figured out that a bigger bait would be deadly on larger saltwater gamefish, such as our beloved striped bass, and in 2016 introduced the 10-inch Swurm.

The big-fish bait weighs 3 ounces, giving it plenty of heft to cast well on saltwater spinning gear. Rigged with an oversized 11/0 worm hook, the 10-inch Swurm is a slow-sinking swimbait that features extremely erratic movement. There’s a hook slot on both the rounded underside of the bait and on the flat top, so it’s easy to rig it to track straight and not spin. It’s available in six colors, including striper favorites like black, gold, white, and bubblegum.

Adding to its fish-attracting action is a single large eye on the underside of each bait. From below, this gives a predatory fish the impression of an injured baitfish listing to one side, twitching and quivering as it slowly sinks. If you’ve ever seen a dying herring or bunker on the surface, you know exactly what that looks like. The eye also focuses strikes at the head of the bait, producing better hook-ups.

Beyond stripers, the 10-inch Swurm has the potential to produce strikes from picky bluefin tuna when slow-trolled on a flatline or cast into feeding fish. In fresh water, it will get the attention of pike, muskies, and trophy largemouth bass.

Northeast fishermen should also check out the two smaller sizes, which are manufactured in 10 colors: Chicken on a Chain, Electric Chicken, Green Pumpkin, Mullet, Pearl Rainbow, Smoke Red Pepper, Sugar and Spice, Swurm Shad, Watermelon Pearl Laminate, and Watermelon Seed. In addition to largemouth and smallmouth bass, they are deadly light-tackle striper lures and irresistible to false albacore and bonito.