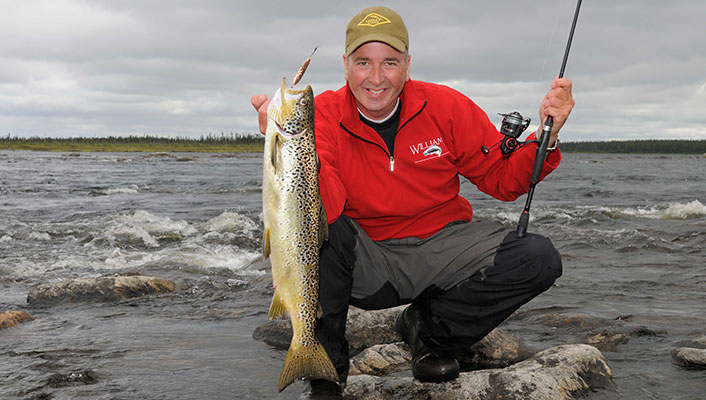 Based on the Sutton design, Savant spoons are deadly for trout and salmon.

Savant Spoons were was conceived by Tom Manning of Andover, Massachusetts. Manning grew up in the Cleveland, Ohio, area. As a kid during the 1960s and 70s, Manning’s father would take him fishing in Ontario. Fishing became Manning’s number one hobby and the passion he developed on those trips endured throughout his life. But, one special place stood out and remained near and dear to his heart. “I fell in love with Lake Savant,” said Manning. “It’s in northwestern Ontario, so it’s way up there in the wilderness. At the time, it was a fly-in lake and was so much different than any other lake I’d fished.”

As an adult, Manning worked in the medical publishing business. By the late 1990s, the time had come to consider what he might do upon retirement. Ultimately, he decided to turn his passion for fishing into something more viable. “I was the CEO of a company in Philadelphia called Biosis,” recalled Manning, “which is a life science research database. It was the last gig I did. I knew at that point in my career—with the dramatic changes in the way publishing operated—I was going to have to figure out something else to do.” Manning wasn’t interested in consulting work, like many of his contemporaries did. With decades of experience in the business world combined with a fine sense of marketing savvy, Manning set out to create a new business from the ground up. He began simply by tinkering, attempting to design a new lure to bring to market. “I was fooling around, trying to learn as much as I could about how dies work. I’m a textbook and journal publisher, so I knew nothing about tool and die making,” he laughed. “I never thought a simple fishing lure would be as complex to put together as it was.”

Manning needed a product and a strategy. He studied the lure marketplace and asked himself what areas he thought were being underserved and where he could fill a niche. “In the fishing business, things go in cycles, even with striper fishing.” said Manning. “You can find stuff that was incredibly popular sixty or seventy years ago and it is either no longer made or somebody recently created something similar. So the cycle goes on, and all of a sudden these things are hot for a while. The spoon market had been, I thought, really ignored except for a handful of companies that concentrated on it. Most of those were relatively new designs, so I went back to more classic designs, because if they worked before, why wouldn’t they work today?” Manning remembered the success he’d had with one particular lure and decided to create a product that would be just as successful. “I uncovered a spoon—the Sutton Spoon—about thirty-five years ago, which always out-produced everything else ten to one. It’s a historical spoon from upstate New York. It’s been around for probably a hundred-and-fifty years.”

The iconic Sutton Spoon is one of the oldest freshwater fishing spoons on the market today. It was invented in the late 1860s by Scott R. Sutton, a jeweler and avid fisherman in Naples, New York. Over the decades, the Sutton Spoon gained a legendary cult following among trout and salmon anglers that spread across much of North America, and still exists today. Manning came up with several variations based on the Sutton design, using it as a model but making improvements to ensure his lures were unique. “I spent about 3 years doing the background on it,” said Manning. “At the time, I created four: there was the original Savant, which is the Magnum; the Crusher; the Jake, named after my youngest son; and the Winnie, named after Lake Winnipesaukee.”

In 2004, Manning founded the Savant Company and based his operation in Andover, Massachusetts. He named the company after his favorite lake from his childhood memories. But, in the business world, timing is everything, and Manning didn’t exactly have global economic momentum on his side. During the first decade of the new century, the country was experiencing some of the harshest fiscal times since the Great Depression. Even in boom times, getting established as a newcomer in the tackle business is not easy. Luckily for Manning, his lure designs proved effective and quickly established themselves in the field. His business acumen and attention to detail also served him well – he recognized the importance of using high quality, durable finishes, and powder-coated his lures. “Little premium things like that are what separated me from other products on the market,” said Manning. As the Savant name gained renown, anglers who had success with the lures became loyal followers and looked for the brand by name.

Manning invested hundreds of thousands of dollars to get his operation up and running. Once he became established with internet sales (and a scattering of mom and pop tackle shops), he started to branch out into the retail market. Retail lure companies, however, operate with slim profit margins and must adhere to a long list of costly requirements imposed by the retailers. This meant high-volume manufacturing and distribution would be vital to profits, but Manning was a one-man show. He began to grow weary of working the circuit, always treading water just to break even. He was also a realist, knowing that about one out of every thousand startups manages to become lucrative. “My original strategy was to build a brand and then sell it to somebody,” said Manning. “That’s why I started the company in the first place… I mean, I’m an entrepreneur at heart and an innovator.”

In 2013, Manning sold his company to Brecks Inc., of Sherbrooke, Quebec, a highly successful and traditional lure operation. The company is best known for its classic, time-honored lures such as the Mooselook Wobbler, Lake Clear Wabbler, and the renowned Williams Wabler. Brecks also owns Mepps Spinners and Mister Twister soft plastic baits. “Brecks was the right kind of company because it’s a Canadian company and they focus on the northern tier of states and provinces,” said Manning. “They’re in the salmon and trout world, and are a class company. We made a connection and I certainly think they are the right home for Savant.”

Although the Magnum is no longer made, and the Crusher will soon join it in mothballs in 2017, the other two Savant models are still manufactured and sold today. The Jake, based on the Sutton 44 trolling spoon, has the same length and look as the Sutton, but is designed to be heavier. It’s stamped in traditional-weight brass rather than the light spring brass that was used to make the Sutton – this results in a heavier lure with a similar action, but one that casts easily for long distances. It is a versatile 3-inch, 1/3-ounce spoon that is effective with a wide range of retrieval and trolling speeds. It can also be vertically jigged.

The Winnie Wonder is a slender, 2 3/4-inch trolling/flutter spoon renowned for trout and salmon fishing, and weighs 1/4 ounce. Varying the retrieve or trolling speed results in different lure actions.

Savant lures are marketed under the Mooselook brand as the “Savant Series,” packaged and labeled under both the Savant and Mooselook names. Their precious metal finishes include genuine silver and 24 karat gold, which reflect light far better than standard metal finishes and are therefore more visible under water. For a more subdued effect, muted copper is also available, with or without painted accents. Savant lures are made in a standard sleek body design or with honeycomb scale patterns. Additionally, the lures feature large, reflective “strike-triggering” eyes. Painted UV reactive “Glow” finishes are also available.

Savant and all the rest of Brecks lures are manufactured in North America. “A lot of people have tried to knock off the Sutton spoon over the years,” Manning surmised. “I wasn’t trying to knock it off. I was trying to produce something that was similar in regard to its action, but was different. That was part of my strategy: to focus on the more classic designs and color schemes … the classic designs I felt would work because they worked well years and years ago when I was a kid.”