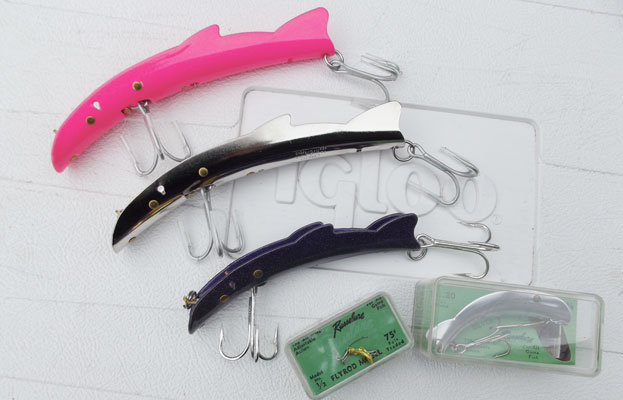 The bass boat veered into an abrupt 90-degree turn, exposing its port side against the rushing tide and breaking seas. The skipper was yelling instructions to the angler kneeling on deck, bent over the gunwale, his heavy rod braced against the coaming. The massive linesider, straining against the restraint of the wire line, was now within reach of the long-handled gaff, which did not miss its mark.

“Keep pressure on that line and keep your heads down. I’m moving out before we lift her in the boat.” It was darker than the inside of an inkwell, yet the crusty Cuttyhunk guide was not about to give anything away as he pulled out of the roiling rip and got out into less turbulent water. This was not a one-handed striper; the skipper lifted the gaff while the angler took hold of the heavy mono leader, their joint effort rolling her over the rail and into the crowded cockpit. The big linesider was far from subdued as she thrashed about the deck, looking for something to snag with the heavy trebles protruding from the metal lure imbedded in her massive jaw.

“Hand me the bat and watch your feet. She’s still plenty green. She’s a strong forty, might even go fifty. One word out of either of you about what we’re using and you will never work this deck again.” The seasoned anglers had heard this before, and while the skipper was busy extracting the silver Russelure from the bony maw of the striper, they shared a knowing grin.

That was a firsthand account shared with me many years later when one of those fishermen told me about the deadly banana-shaped lure. One of the worst-kept secrets of the Cuttyhunk guides was their lures of choice. If it wasn’t a big Goo-Goo Eye swimmer or an eel-skin rig or plug, it was probably a Russelure.

I saw my first Russelure wedged in the mouth of a dead striper on ice in a guide’s fish box. When that man caught me staring at his lure, he cussed me out and threatened to toss me off the dock. I made up my mind that, as soon as possible, there would be one hanging on the lip of my lure bucket. I didn’t know anything about the lure except that it caught fish, and I had never seen one for sale in any of the tackle shops I frequented. This was long before computers, so I spent hours in the research department of the library, reading texts that were several years less than current. My research ended in a dead end.

This is where my recollection gets somewhat murky. Russ Malone, my fishing partner of over 30 years, was the beneficiary of a charter trip to Cuttyhunk when one of the men who’d booked it had to cancel at the last minute. Russ caught some huge fish that night on a banana-shaped metal lure he had never seen before. The following day, we talked about those lures and, a few years after I had spotted that fish on the Cuttyhunk dock with the metal lure in its maw, I finally made the connection. Russ asked a man who worked for the tackle wholesaler in town to order some, but because he was not a distributor, he had no idea what price he might have to pay. Russ received three lures that were exactly what he had used on the charter. Armed with that information, I went to the same jobber, who warned me that he would order them, but could not guarantee the color or the price. That was good enough for me.

I had some great catches and adventures with those metals, but I never achieved the drama of the night Russ and my friend Larry Sczesney hooked up to the fish of a lifetime. Larry had fallen in love with Jersey sea skiffs and eventually purchased a handsome 23-footer from down off Cape May. She was long, sleek, and fast, and on one very slow night, the boys decided to run to Sow and Pigs off Cuttyhunk, over unusually calm seas, to find moving water and some stripers in a feeding mode. They arrived at Sow and Pigs Reef just in time to see the wakes of two charter boats heading for Gay Head. The tide had almost run out, so they snapped a pair of Russelures on their wire-line trolling outfits and began making a pass along the treacherous boulders. After boating two mid-teen stripers, they made a longer pass toward Southwest Bluff, where Russ hooked up to the fish of a lifetime. Russ was my decades-long fishing partner, for whom I gaffed at least four or five verified 50-pounders, so when he reported that this was the largest striper he ever hooked up with, I had no reason to doubt him. Most epic striper battles seldom last more than five minutes, although it often seems much longer. Russ and Larry battled this fish for well over 15 minutes, but finally lost it when a portion of its jaw tore loose and the fish went free. They brought the lure (with the section of jaw attached) back to our marina, where numerous fishermen handled it and listened intently to the story. There weren’t any doubters in our group.

Years ago, I fished myself out of Russelures. I caught a 25-pound-class striper that scrubbed the lure so badly that it bent the exposed hook. I put my last lure on and immediately hooked up with a broad-shouldered old lady that took off for the boulders, where she scraped my 50-pound leader to shreds. With only one silver lure left, I decided to put it into retirement.

A few years later, I bought a batch of plugs unseen, and when I opened the box, there were three beautiful Russelures in the collection, a totally unexpected bonus that put me back in business.

More recently, I was once again down to a few lures when I conducted a Google search and was surprised (and elated) to learn that the Russelure company, founded by JK Russel in 1947, was still in business. I contacted the company and spoke with its president, Mike Felts, an avid fisherman who’d bought the company and moved it from California to Texas, where the lures are still made in the USA as strong and effective as ever.

One of the claims on the package is “Made of high strength aluminum, solid brass and stainless steel hardware. You are fishing with a virtually indestructible lure.” After all these years, I can attest to that statement. In keeping with modern times, the company has expanded its line to include several other fish-catching lures. I know the Russelure was a proven fish catcher in the past, and nothing has changed.