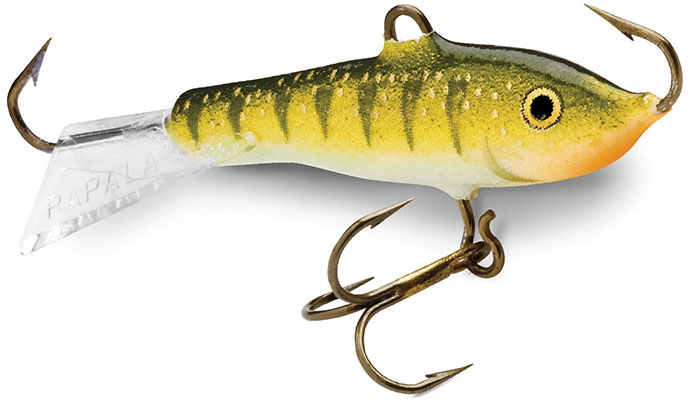 The Rapala Jigging Rap, which can be used to fool several different game fish in any part of the water column.

Rapala has been a name synonymous with fishing lures since 1936, when Finnish angler Lauri Rapala used a shoemaker’s knife and sandpaper to craft his first lure out of cork. His hand-carved creation (what would later become the Original Floating Rapala) perfectly mimicked a wounded minnow. Word spread quickly and Rapala’s status as a fishing lure powerhouse began. Over the decades, the company added numerous innovative lures to their lineup, yet one thing stayed constant; their goal to precisely replicate the action of injured baitfish that predators can’t resist. With this in mind, Rapala hit a homerun with the Jigging Rap, which can be used to fool several different game fish in any part of the water column.

I am just one of an untold number of anglers that can thank a Jigging Rap for their largest jig-caught fish through the ice. Mine came on a cold, windy day while tucked behind a Jet Sled that was propped up for makeshift shelter. The screen of an electronic fishfinder displayed my Jigging Rap as a thin black line suspended about 10 feet off bottom. As I waved my jigging rod like a symphony conductor, the lure hopped and turned in tight circles 60 feet below me. The thin line bouncing on the screen soon had company as a thicker line shot off bottom like a rocket, engulfed the jig and doubled over my rod into the ice hole. After an enjoyable tug of war, an obese 2-foot brown trout flopped beside me with the Jigging Rap secured tightly in its jaw. It’s been a confidence lure for me ever since.

Rapala offers the Jigging Rap in a wide selection of 17 color patterns, from traditional to UV glow options. Classic choices like gold or chrome blue do a fine job of representing natural baitfish, while the glow colors are sometimes better suited for stained water, targeting walleye and crappie in low-light situations, or plying the depths for trout. The jig also comes in five different sizes, from 1/8-ounce (1.25 inches) to 7/8-ounce (3.5 inches), which match the profiles of favorite forage for a slew of freshwater fish like walleye, bass, crappie, perch, pike, pickerel and trout. The Jigging Rap’s center treble hook and single reversed hooks on each end ensure plenty of sharp points to land home in a fish’s mouth. Its center eyelet placement allows the Jigging Rap to hang perfectly balanced underwater when held still, and this lure can be almost effective at rest as it is in motion. When put to work however, the jig’s characteristic swimming action is owed to its plastic tail fin.

There’s really no wrong way to jig a Jigging Rap, but to hear how a pro does it, I got in touch with Freshwater Fishing Hall of Famer Tom Neustrom of Minnesota. Tom is an everyday fishing guide so it didn’t come as a surprise that he was on the water when I initially reached out to him. He called me back later that night and explained how walleye and crappie were beginning to stage in the areas they’ll occupy when his favorite lakes freeze over, so he’s essentially jigging up fish now from a boat the same way he’ll be doing it a month or two on the ice, with a Jigging Rap.

“The turning of the bait is a big triggering factor for the fish,” Tom explained. By lifting and dropping the rod tip, the Jigging Rap begins an enticing circular swimming motion. Tom prefers short lifts, about six inches to a foot, for crappie and walleye, though he knows several lake trout anglers who use a much more exaggerated sweep of the rod tip of a few feet. For his beloved crappie, Tom prefers a size #2 or #3 Jigging Rap and doesn’t bother sweetening the hooks with anything unless his quarry is being particularly finicky, after which he’ll add a pinched-off minnow head or tail to the treble hook. Aided by electronics, Tom lowers the jig to hang inches above the schooling crappie where he’ll perform his lift-and-drop technique and sometimes employ a little jiggle of the rod that makes the Jigging Rap short-hop in a loop. Tom said the crappie are drawn in by the action of the Jigging Rap, sometimes coming in so close they bump it with their nose.

For larger walleye, Tom steps up the size of the Jigging Rap to #5 and always tips the treble hook with a minnow head or scented plastic bait like Trigger X. A technique he likes to use on hunkered-down walleye is to drop the jig to bottom, causing a puff of sediment that grabs their attention. He then proceeds to swim the jig with short snaps of the rod tip to draw the strike. With all the turning and spinning of the jig, Tom stressed the use of a leader and small barrel swivel a couple feet above the bait to prevent line twist.

In open water or under the ice, the versatile Jigging Rap has demonstrated time and time again its ability to win over fish suspended throughout the water column. As Tom simply put before hanging up, “It’s a heck of a lure.”