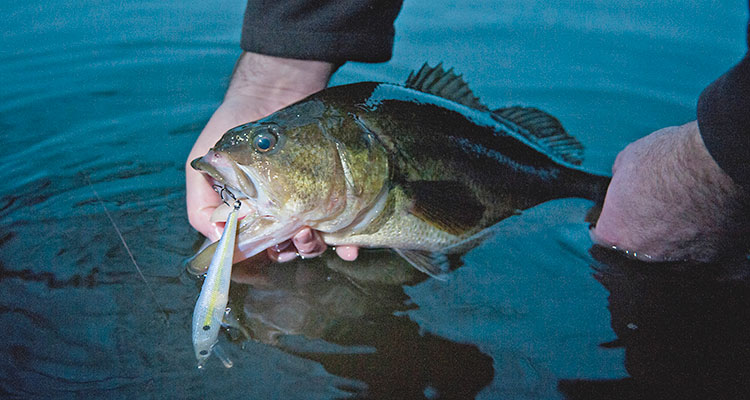 You don’t often think of fish as noisy animals. Most fishermen know that some fish, such as members of the drum family, can use their swim bladders to create loud croaking or drumming noises, but would be surprised to discover that all fish make noise.

As a fish swims, its gillplates open and close, and its swim bladder compresses and expands, generating a dull chirping noise. Tuning into these sounds is an important survival tactic for fish, both to find food and to avoid becoming food themselves.

It’s this noise that Livingston Lures, based in San Antonio, Texas, set out to replicate. To do this, they eschewed the use of conventional fishing lure noisemakers such as bbs, glass rattles, and knockers, instead using a water-activated circuit to create the sound electronically.

Livingston’s Electric Baitfish Sounds (EBS) technology mimics the natural sounds made by fish. The sound chamber is activated when the bait is submerged, and the water closes the circuit between the line tie, hook eyelet and sound-producing circuit board. The sound turns off when the lure is removed from the water and the circuit is broken.

Livingston Lures and its EBS technology has been around since 2004, but the company entered the limelight in 2014 when bass pro Randy Howell won the 2014 Bassmaster Classic using a medium-diving Livingston crankbait. Howell credited the lure’s fish-attracting sound in the murky waters of Lake Guntersville for his 29-pound limit on the last day of the tournament, rocketing him from eleventh place to first.

The EBS technology is available on Livingston’s entire line of lures, which includes bass-fishing essentials such as jerkbaits, poppers, and walkers, along with lipless, waking, shallow-running, and deep-diving crankbaits.

The lures are available in three categories, the Pro Series, the Team Livingston Series, and the Tournament Series. The Pro Series lures feature EBS technology and Livingston’s advanced rattles to provide even more sound, while some models also illuminate when the lure hits the water.

The Team Livingston Series features EBS MultiTouch, which allows anglers to choose between four sound options—EBS Original, EBS Shad, EBS Crawdad, and silent. The EBS Original replicates the sound of a baitfish flaring its gills and expanding and contracting its swim bladder. The EBS Shad mimics the sounds made by a panicked and fleeing shad, and the EBS Crawdad makes the clicking and popping sounds of these freshwater crustaceans. These sound options allow anglers to tailor their bait to the conditions and location.

To switch the sound on a Team Livingston Series lure, place the lure in the water for five seconds to get it wet and activate the EBS. Pick up the lure and touch a finger and thumb to the two contact points, the hook hanger and line tie. The lure will cycle through the available sounds, and when you hear the sound you want, simply remove your fingers from the contact point and start fishing.

With almost 30 different lures to choose from, Northeast bass anglers will have no problem finding a Livingston Lure that will work regardless of the location or the season. In spring, anglers will find the most success with Livingston’s jerkbaits, the Stick Master 127 and the Jerkmaster 121. Both are designed to fish shallow, with an erratic retrieve meant to trigger strikes from early-season bass. The EBS technology gives the lure extra attraction on the pause, fooling more bass into attacking the bait.

The shallow-diving and squarebill crankbaits like the Primetyme SQ 2.0, Primetyme CB 2.0, and Howeller Dream Master Classic SQ are more springtime must-haves, running between 3 and 5 feet, deflecting off stumps and cover, all while calling in prespawn bass with the EBS technology.

As the waters warm, more aggressive presentations like the surface-running Pro Wake, which not only emits sound but has an illuminated tail, are perfect for drawing a bass’ attention.

For summertime topwater fishing, the Spinmaster, Walk N Pop 77, and Walking Boss use the EBS technology to call bass to the surface, especially during the long pauses sometimes needed to get a bass to commit to a surface lure.

The latest innovation from Livingston was unveiled at the International Convention of Allied Sportfishing Trades (ICAST) in 2015. Livingston has included a “smartchip” that allows a fisherman to connect to the lure through a smartphone, using Bluetooth and an app. The app allows the fisherman to download dozens of natural bait sounds and record the success of each individual sound. The available sounds include those made by bluegills, perch, gizzard shad, shiner, and herring, allowing anglers to match the sounds made by just about any bass forage they are likely to encounter. Anglers can use the same lure with success throughout the season, simply by changing its sound to the predominant baitfish at that time.

Livingston Lures have added a level of sophistication to noisemaking lures that anglers had never dreamed of, allowing them to not only “match the hatch” in profile and color, but in sound as well.