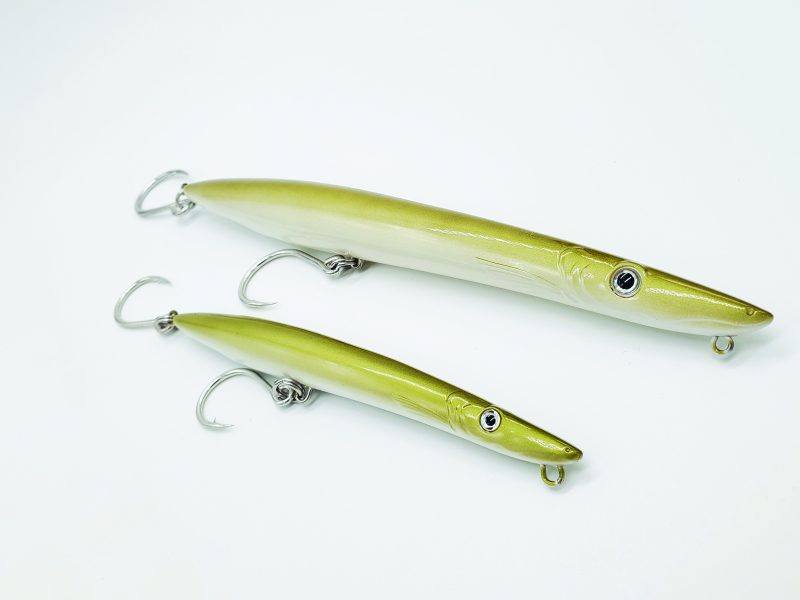 Nick Whitbeck was in the process of launching a lure company in early 2020 when the pandemic hit and put his day job on hold for eight weeks. This allowed him to completely throw himself into lure making, tinkering with the designs of his fledgling lure company, sometimes for 8 to 12 hours a day. This helped Nick get a mold made overseas and product in hand in time to launch a unique topwater design for the 2020 season on Nantucket—the Hellfire Pencil.

After several rounds of trial and error with the design, Whitbeck learned a big lesson when the plugs from the first order split. This “happy accident,” allowed Whitbeck to play around with the weighting system to further refine the plug. The result is a knocking, tail-weighted, long casting pencil that slashes across the surface, calling up the most sought-after species in the Northeast surf.

As a surfcaster on Nantucket, casting distance (especially on windy days) is among the most important qualities of a lure for Whitbeck. So, he wanted his to be able to reach the fish, even on windy days. He also wanted a topwater that would fish in a crosswind. With the adjustments made to the weighting system, Whitbeck achieved his goal.

The Hellfire punches through a headwind and, in a crosswind, its tail-weighted design helps keep it glued to the water rather than skittering across the surface due to a bow in the line. Also helping with casting distance is the reduced turbulence from the lure’s inline single hooks, which Whitbeck chose over trebles to make the Hellfire more catch-and-release friendly.

Anglers will appreciate that when watching a striper strongly swim off and especially when reaching to unhook a thrashing bluefish.

To fish the Hellfire, “Just shake the rod and get it going,” Whitbeck said. A medium-fast retrieve and constant rod action, causes the Hellfire to slash erratically, “white-washing the surface,” as Whitbeck put it. A slower retrieve keeps the lure just barely at the surface, nosing along with a more subtle but still erratic presentation.

The Hellfire 180, at 7 inches long, was designed to be a bass and bluefish lure, but surfcasters on Nantucket (and beyond) soon found skipping the 180 across the surface was a deadly presentation for albies and bonito. The Hellfire 120, at 4.75 inches and 1.15 ounces, was designed for light tackle and hardtails.

While initially known as the Grey Lady Tackle Company (for Nantucket’s nickname), Whitbeck rebranded the company in the summer of 2021, renaming it IslandX. While the name changed, the lures remain, with more in the pipeline.