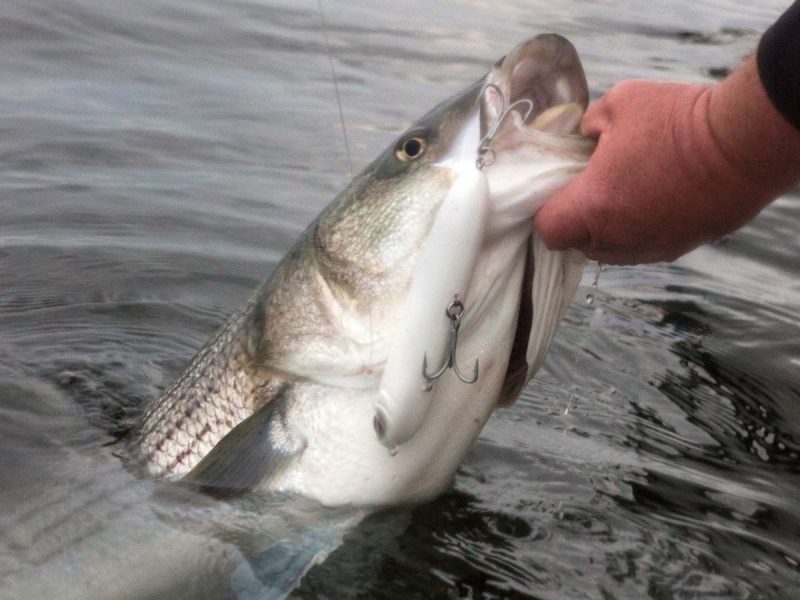 Daddy Mac Lures began when Jack Houghton and Dennis MacDonald started sifting through the dirt at gun ranges for spent bullets that they melted down and turned into striped bass jigs. The two passed out the lures among their friends in the rod-and-reel commercial fleet off Cape Cod. As fishermen saw how well they worked, Houghton and MacDonald were soon inundated with requests to buy the lures. They increased production and expanded the line to target everything from largemouth bass to albies.

Stripers are still the heavy favorite among Daddy Mac’s customers, and in recent seasons, the company began developing more hard-plastic lures for the seven-striped predators. In 2016, it created the AB Bomb, a smallish topwater walker for light-tackle casting to albies and school bass; over the winter, the company finalized development of a bigger topwater aimed at larger striped bass.

The popularity of the Drifter Tackle Doc, a 9-inch spook bait designed for Midwest muskies, inspired a large walk-the-dog bait specifically for striped bass. For this, Houghton collaborated with his good friend, Cape Cod charter captain Bobby Rice. Bobby is one of the first on the scene when the stripers arrive on the Cape every year, and he puts his clients on serious numbers of stripers during the spring and summer runs. Bobby and Jack wanted to make a lure that had a big walking action, fish-attracting sound, and a construction that was saltwater tough. The Result is the Daddy Mac Bobby Rice Series RD Bomb.

The RD Bomb comes with top-of-the-line components meant to take the abuse of big bass, including its Spro Power Split Rings and 4/0 VMC hooks. It has a solid plastic construction meant to survive bounces off rocks and gunnels, and repeated attacks from bluefish. Internal rattles give the lure extra attraction for bringing big, angry bass to the surface.

The RD Bomb is equipped with two trebles on the rear two hook hangers, which Houghton said is how Bobby prefers to rig it. This setup makes it easy to use the front of the lure as a handle for landing a fish from the boat.

For surfcasters, who don’t have to worry about lifting their bass over the gunnel of a boat, placing treble hooks on the two belly hangers and a hookless flag on the rear hook hanger gives the bait extra action and a little more size for coaxing a trophy striper out of the rocks.

Daddy Mac took a Henry Ford type of approach to the color schemes of the RD Bomb—anglers can have any color they’d like as long as it’s ghost white.

The RD Bomb comes in two sizes, and both are heavy for their lengths to improve casting distance. The 9-inch model weighs 3.6 ounces and the 7-incher weighs 2.9 ounces. This adds to the appeal of the RD Bomb for surfcasters looking for long-casting topwaters to reach distant bass.

The Bobby Rice Series is Daddy Mac’s second collaboration with a Northeast captain, the first being the Tim Moore Nervous Minnow, a jointed metal jig targeted at freshwater predators like lake trout. As the company continues to grow, expect more Daddy Mac lures designed for our waters with the help of the anglers and captains who fish them for a living.

• For More Information Or To Buy Your RD Bomb, Check Out daddymaclures.com