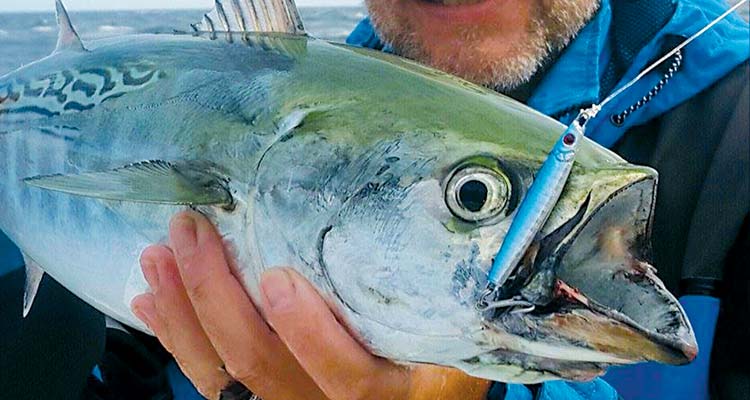 For residents of the Northeast, the final dog days of summer are treated more as a ceremony than as the end of a season. The rugged hills and seaside towns slow, accepting a lethargic and patient transition before the low light and chill of autumn settles in for good. Drinks are poured, towels spread out, and troubles forgotten. Yet, while most people use these fleeting moments of New England heat and blue skies to relax, some adopt a different temperament. Filing out in droves, fishermen across the East Coast don waders and rev engines with eyes to the sea, waiting patiently for the first signs of the fast, powerful gamefish that grace our waters every year: the false albacore.

However, before the enthusiasm and excitement compels you out the door, there is still the matter of finding the right lure to do the job. To fool false albacore, a lure must meet several criteria. It must be small, in order to match the tiny baitfish upon which albies most often feed; it must cast well to intercept these fast-moving fish and cover water when the fish aren’t showing; and it must have an attractive finish to catch the keen eye of the false albacore among a sea of baitfish. When setting out to create an albie lure, Jack Houghton of Daddy Mac Lures, made sure to check all those boxes.

The Daddy Mac Albie/Bonito Jig has a thin, yet durable body, an incandescent sheen, and a single, sturdy VMC treble hook attached with a 40-pound-test Rosco split ring. The lure is heavy for its size, capable of long, projectile casts, more than enough to reach busting false albacore slamming bait far offshore.

The Albie/Bonito Jig is available in colors to match some of the albies’ favorite foods, such as squid, herring, and sand eels, and it comes in ½- and 1.4-ounce sizes.

Bear in mind, this lure doesn’t have to be thrown solely at albies. A bucktail trailer and a single hook added to the tail makes it a fine bait for schoolie stripers or shallow-water sea bass. Houghton also said that the lure is a good choice for freshwater jigging too, with both lake trout and smallmouths falling for this lure.

Daddy Mac Lures was born in a time when the demand for cost-effective jigs was sweeping across the shores of Chatham. Anglers wanted something strong, yet cheap, and Houghton provided. Starting out by first visiting gun ranges to obtain and melt used bullet casings, he quickly proved he was willing to go the distance, even to the absurd, to produce something affordable for those who wanted to chase stripers. Since then, he’s expanded his offerings from metal jigs to jointed swimming plugs, topwaters, and even soft plastics meant for a variety of species including marlin and tuna, bass and trout, stripers and bluefish, and, of course, bonito and false albacore.

• Check out DaddyMacLures.com For more info on Daddy Mac Albie/Bonito jigs and their complete line of products