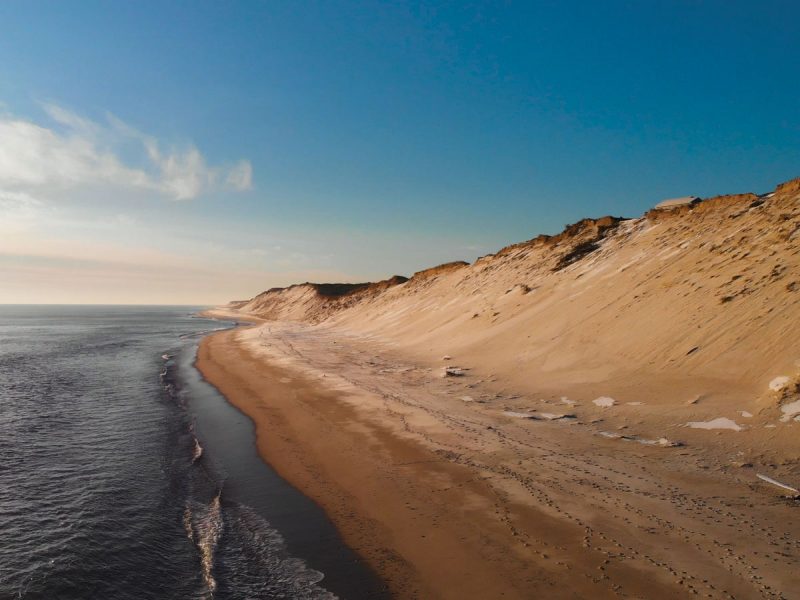 There is something about surf fishing, or perhaps surf fisherman, that inspires deeply rooted traditions and rituals. Perhaps it is the profound connection we have to the phases of the moon, the tides, or the weather that drives these seasonal compulsions. We are like robots, programmed to perform precise actions given specific inputs. Or, perhaps we are like conditioned animals, reacting automatically to natural cues that go deeper than conscious thought. For some fishermen, it might be the first moon of April, signaling the return of herring and meaning it’s time to return to a favorite tidal estuary. For others, the first hard northeast blow in October automatically puts them under the lighthouse in Montauk. And, for others still, it might be the rising of the Buck Moon, the full moon of July, driving them to spend long nights slinging eels off the rocks of Cape Anne. There is no debate, no consideration of an alternative for these anglers. They just go. They react almost without free will; they must fish these patterns and uphold these traditions.

The fall in particular seems to bring out these feeling for many surf fishermen. It certainly does for me. It is a time to celebrate the season that is quickly falling behind us and the waning moments that remain to immerse ourselves in a pastime that has been so dominate in our lives for the last five, six, or seven months. This is especially for me late in the fall, when I start to get desperate and fall back on the patterns, locations, and techniques I enjoy the most. It often starts to feel like a celebration of my “greatest hits.”

One that transcends actual fishing success is my yearly pilgrimage to the beaches of the Outer Cape. This is steeped in tradition and is my way of paying homage and respect to a once-great fishery as well as many legendary fishermen. Yet, the Outer Cape beaches are not what they once were. I missed the best fishing by many years, though even in my own time plying the vast shores of the Outer Cape, I have personally seen the fishing diminish as well.

Still, every fall I go, and will continue to as long as I am able. I am enchanted by the endless sand beaches and tranquility of the Outer Cape. I am not afraid to be alone or to fish alone. I seek out solitude, and the loneliest, wildest places that remain along our New England coastline—and there are few places wilder and lonelier than the Outer Cape in fall. Especially now, with so few fishermen trying their hands at these hallowed beaches, the solitude is deep and intoxicating. There are nights in late October and early November when I can walk 15 miles and never see another angler. I treasure this opportunity to experience the majesty of the shoreline, all on my own – to see what it was like before condos, mansions, and beach clubs cordoned off huge swaths of coast. 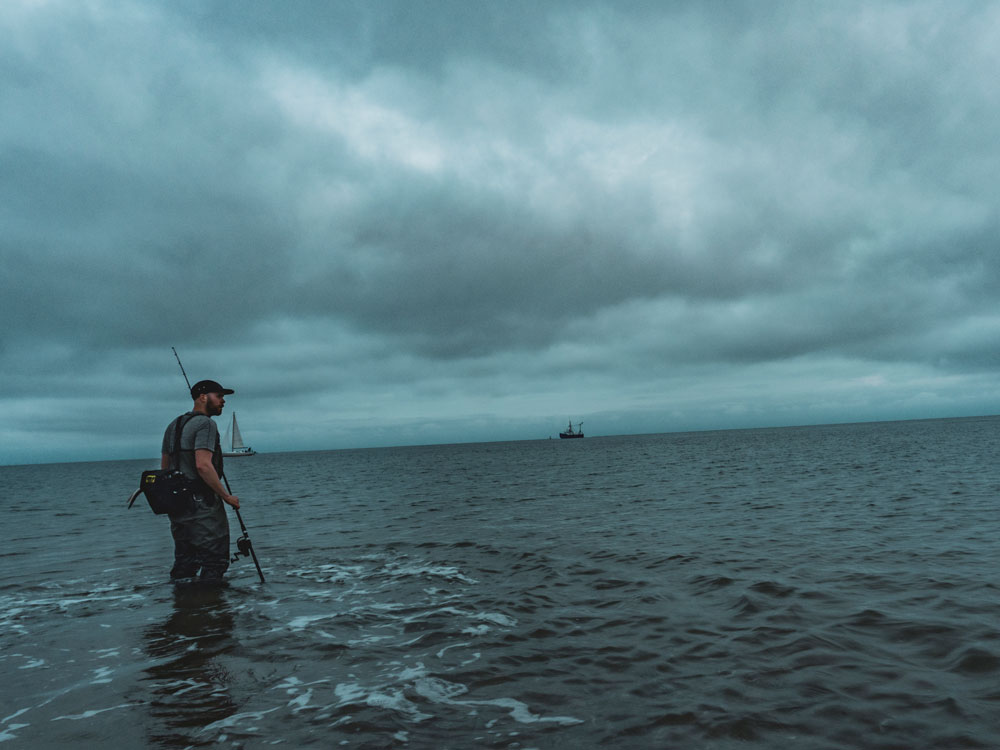 It isn’t all bleak, empty tides, and endless deserts of lonely sand. There are still opportunities to catch fish. For the most part, information is tight-lipped, which is a true anomaly these days. Those who fish these beaches are generally friendly, but they aren’t giving information to outsiders on social media. They complain about the fishing not being what it once was, but they certainly don’t complain about the lack of fishermen. I’ve seen a few glimmers of what is possible, even recently. In 2018, I walked away from the beach when I had tallied well over 60 fish, and while I still have not landed an Outer-Cape cow, I have witnessed a couple big stripers caught by fellow anglers.

I have made so many memories on those endless sand beaches. Once, I spent a long weekend in September with my best friend and his twin. While the fishing was slow, we each managed to catch more than a few fish, and I lost one fish off a backside beach on a needlefish. That will haunt me until my death. That same night I watched my friend get completely rolled over by a huge rogue wave in the surf, tumbling and completing disappearing into the wash. As I was just about to abandon my gear and jump in after him, he popped up, coughing and sputtering. As luck had it, he barely even got any water down his waders, then proceeded to out-fish us the rest of the night. “The fish accepted me as one of their own,” he told me later.

When Tony Stetzko passed in early 2015, it hit a lot of fishermen hard. He had a huge presence in the surf-fishing scene, and not just on the Cape. I felt a twang of loss with his passing because I’d read his stories and talked with his friends, so I felt a connection to him. When I heard the news, I made a decision to fish the coming November (which, at the time, was eight months away) along the same stretch of beach where he caught his world-record 73-pound fish. I wanted to honor his life and accomplishments as one of the most renowned surf fishermen of all time.

The November night I chosen just happened to be during the onset of a storm. Wind was projected to reach a steady 50 knots by dawn, and I knew I was in for something special. In all likelihood, I would not catch many fish (or any fish at all), but the odds of nabbing a late-season monster were real enough to get me excited.

When I arrived at the Nauset Beach parking lot, I was not at all surprised to find it empty. I planned to walk the whole section from the lot to the inlet to the north and back, a round trip of around six miles. The entire night, the ocean was a raging, pounding beast of immense strength that pushed me back nearly to the edge of the dunes. I even had a moment of genuine fear that I might get trapped on the narrow spit between beach and bay.

Once I felt safe again, I found a nice bowl to pitch a plug into. I stood there for a long time, facing out at the dark sky filled with churning, black clouds. As time passed, I slipped into complacency, casting unenthusiastically, exhausted from my walk out and the five hours of standing against the gale. At some point, I closed my eyes for a moment, shutting out the piercing wind and torrents of rain. Then, suddenly, I felt as if I was being watched, so I swung around, looking for someone else on the beach. My heart was slamming in my chest, but there was nothing, no one, there. I had stopped reeling my needle, but as I twisted away from the surf, I yanked it hard. In the brief moment after feeling fear and then relief at the realization that I had probably almost fallen asleep, I had a crushing hit from a fish. I was so stunned that it spun me around and I didn’t set the hook. The fish took a very short, powerful run, and then was gone. It all happened so fast—from being exhaustively bored to jolting frightened to hooked-up to a fish – that it felt simultaneous. I threw my arms up and laughed, overwhelmed with a mixture of emotions as I was pelted by rain. A hit-and-run November giant.

However, to date there is one trip that stands out among all the others. A sudden storm had rolled in off the sea, and I knew I had to drop everything and head to the sand beaches. The storm, the moon, the time of year; it had the makings of something special. It was Halloween, and I called my friend, Rich, to see if he wanted to fish. As it turns out, he was already on the Cape on a last-of-the-season long weekend. We made a plan to meet that night at dusk.

As we walked the path through the dunes, the wind raged. It was one of those nights when you had to read lips and stare into each other’s faces or you wouldn’t even know the other guy was speaking. The ground below our feet vibrated and rumbled with a deep resonance as if it might just fall away at any moment. Random lightning flashed high above, or far away (well, that’s what I hoped). We never heard the thunder because the booming above was drowned out by the roar of the ocean below.

I remember feeling a jolt of nervousness as we made the final climb through the dunes to the open beach. The overwhelming dissonance of wind and waves emanating from the other side of the sandbanks strummed some long-suppressed animalistic caution in the deep portions of my reptilian brain. Evolution screamed at me: Don’t go out there. Regardless, we walked on, driven by that same compulsion I spoke of at the beginning of this article. It was tradition to fish this wind, moon, and tide, so we were going out there, no matter what.

Just before crossing onto the open beach, I paused to watch the sand coming off the highest dune peaks in a constant fountain. As I stood looking up at this stream of sand, I realized it was raining down on us, forcing me to put my arm up to cover my face from the downdrafts. We then stepped out onto the beach proper and found the sea to be a swirling, angry mass of black water, sharply contrasted with the brightness of enormous, crashing white waves. The horizon was lost; a perfect blend between storm clouds and rolling swells. I had never seen bigger, and haven’t since. I looked sidelong at Rich, and he shrugged, and I just burst out laughing; which subsequently filled my mouth with sand.

We stumbled down the hard beach and into the teeth of the wind. Spray from the waves was being blown a dozen yards up the slope, and we winced and gritted our teeth against the brine coating our faces. The waves broke and shot up the shoreline in a seemingly desperate grab, reaching tendrils out to get us. 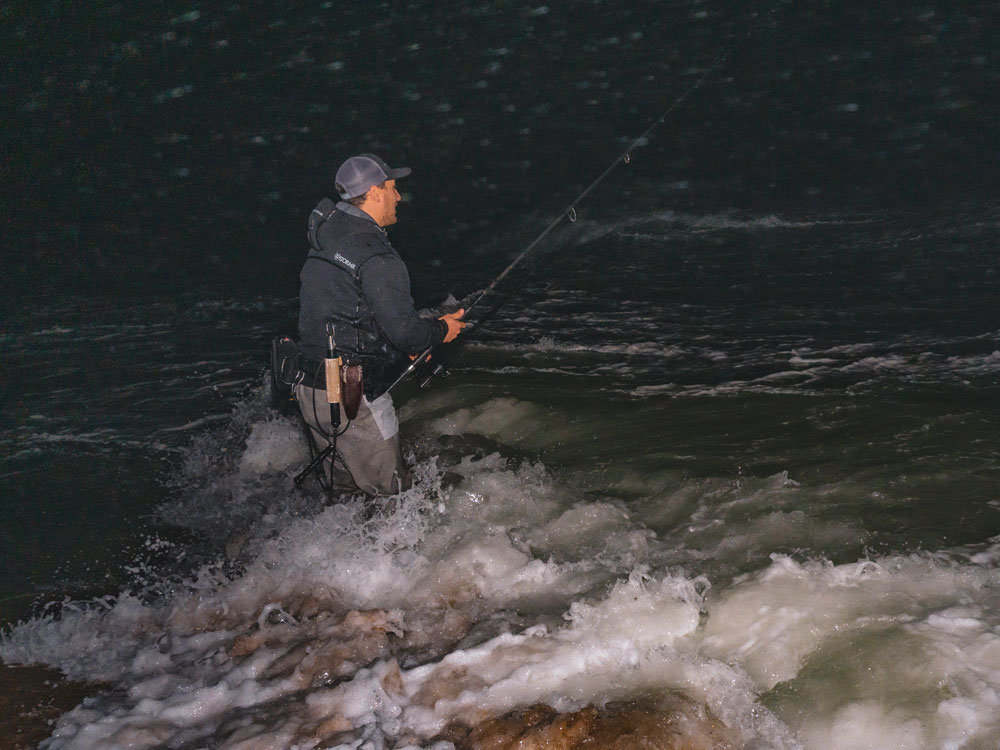 There were only two options for lures that night—needles and bucktails. Rich always opts for a needlefish, so I figured I’d try a bucktail. On the very first cast, my bucktail was nearly blown directly back into my face. On Rich’s first cast, he hooked and landed a keeper-sized fish, so we knew they were right in the insanity of white water. As he released the fish, we were both wearing Cheshire cat grins, manic and wild-eyed. These were the conditions a surf fisherman lives for, the conditions legends are made from.

We worked a couple of miles of sand beach with our best efforts, every cast the hardest we could manage. We walked and casted, casted and walked, never speaking. You couldn’t, not even 30 feet apart. I remember being intensely focused, and the hours flew by. In the dark chaos of the storm, even with Rich vaguely in sight, I still had a feeling of isolation. The din of the ocean and wind was so encompassing that they helped focus my mind and made every moment feel slightly frantic. The world around me was raw and violent, and I opened myself up to it. I let it wash over me and through me. I sank into it, fell into it, and all thought of anything else besides the act of casting—and avoiding being captured by the sea—escaped my mind.