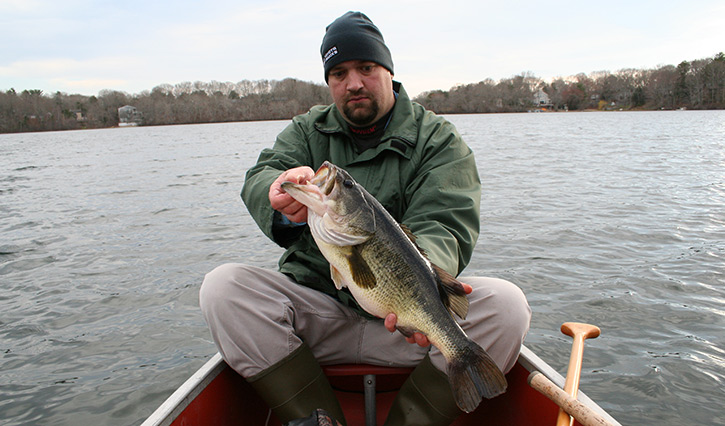 Discover a versatile category of soft-plastic baits for springtime bass.

Jerk shads are weedless and snagless, can be worked anywhere in the water column, they cast a mile, and some of them can be skipped under docks and overhanging trees.

My ultimate confidence bait is the wacky-rigged 5-inch Yamamoto Senko. This bait not only catches me more fish than the rest of my tackle box, it is so integrated into my bass-fishing philosophy that I dedicate a fishing rod solely to this tactic. But this article is not about my number-one bait—it’s about my number two.

I find that while the Senko excels in and around structure, it is less effective, and excruciatingly tedious to fish, in open water. I consider the Senko a “drop” bait, meaning 70% of the strikes come almost immediately after the bait drops into the water, as it descends around structure. I do well by focusing on close-to-shore structure with a Senko, but I realized that I needed a different, complementary bait that could probe the same structure and surrounding open water and drop-offs.

I experimented with lipped and lipless crankbaits and minnow mimics, but I was frustrated by snags. I experimented with Texas-rigged and Carolina-rigged baits that I could cast into snags and debris with impunity, but I missed the capabilities of the crankbait. I wanted the ability to fan-cast great distances and work the water column without having to change baits multiple times. I tried rubber swimbaits, craws, creatures, salamanders, plastic worms, and grubs. The problem was that I was switching baits every ten minutes because no single bait did what I needed.

One spring morning when the fishing was slow, I decided to try a bait that had gone largely ignored in my tackle box for freshwater bass. I rigged up a weightless 4.5-inch Slug-Go in the Arkansas shiner color and put it to work in what seemed to be a lifeless cove. The Slug-Go is a tried-and-true saltwater mainstay for all sorts of fish, but it has fallen out of favor in freshwater.

Within an hour, the Slug-Go had produced five quality largemouth bass. I stayed with the Slug-Go and discovered after a productive month that it was no fluke! So, I embarked upon a phase of my fishing education that I affectionately refer to as “The Great Slug Wars.”

I went on a binge and grabbed a bag of every slug, shad, and fluke-style bait I could lay my hands on, from the Caffeine Shad to the Banjo Minnow to the Super Fluke to the RT Slug. What I discovered was not a single best bait, but a classification of versatile and productive baits. Jerk shads are weedless and snagless, I can work them anywhere in the water column, they cast a mile, and some of them can be skipped under docks and overhanging trees. Most importantly, they allow me to fish creatively. I had found a second bait I trusted as much as the Senko and was able to fish with double-barreled confidence.

What’s in a Shad

Tackle manufacturers, in a way, are much like state governments in that they all do the same things differently. Every company has a different name for a similar bait. Zoom calls their version a fluke, Lunker City calls it a Slug-Go or a Fin-S Fish, Strike King calls it a shad, Mister Twister calls it a slug, Sebile calls it a Magic Swimmer, the YUM version is a Houdini, and Yamamoto’s is a Shad-Shaped Worm. Ironically, I have found that one of the most effective jerk shads is a worm—a weightless-rigged 4-inch Senko or Yum Dinger fished “shad-style.”

So, what the heck is a jerk shad? Is it a slug, a shad, a worm, a fish, or a fluke? In order to nail down what a jerk shad actually is, you need to look at the characteristics. I consider a jerk shad to be any soft-plastic bait that contains a hydrodynamic body and a useless-looking tail, or no tail at all.

A Tale of Tails

Choosing a Jerk Shad
Soft-plastic jerk shads are available in many different shapes and sizes, from a number of different companies. Certain jerk shads will excel under certain conditions, so it pays to experiment with different styles

Tails on jerk shads vary from manufacturer to manufacturer and are as diverse as their names. Some are diamond cut, some resemble the fluke of a whale, some are a spaghetti-like segment, some taper to a point, some allow the fisherman to modify the tail to his liking, and some don’t seem to have a tail at all.
The tail of the jerk shad appears to be flaccid, useless, or nonexistent. In fact, the best way to identify a jerk shad is to see what it does on a straight retrieve. If the bait and tail do absolutely nothing as you drag it through the water, then it is a jerk shad. The key to the jerk shad is that there is only one wrong way to fish them—a straight retrieve.

Even though the tail of a jerk shad appears to be useless, it is not. As you get creative and experiment with different ways to work the bait, you will see that the tail is the dynamic element that fools the fish into striking. The tail of a jerk shad produces a tiny flutter when the bait is jerked or twitched into action, emulating a fleeing minnow’s tail kick. When the bait stops and sinks, you will see the same undulation or wagging motion that you see on the ends of a descending wacky-rigged Senko. The magic of the useless tail is twofold, and each fold drives bass nuts.

The thing I love about the jerk shad is that it is an interactive bait. It depends on the angler to bring it to life by jerking it or twitching it. Snap it into forward motion with a quick flick of the wrist and watch what it does. You can do hard jerks, light twitches, micro twitches, a twitch then nothing, a series of hard twitches, or a series of micro twitches. You can make the bait run in fear, you can make it hang out in the rocks unaware, you can make it porpoise, you can make it breach like a tiny humpback, you can let it flounder and languish on the bottom—the possibilities are endless. As you experiment with the jerk shad, pay attention to what the tail is doing and you will understand why fish are compelled to punish it.

Proper presentation of a jerk shad is dependent upon perfectly centered placement of the hook within the bait. The hook should be as close to center as possible or the bait will list to one side on the jerk.

Rigging
Soft-plastic jerk shads can be rigged in a number of different ways, which makes them versatile. Using an offset worm hook provides a weedless presentation that can be worked near the surface. In deeper water, switch to a weighted hook or jighead.

Rigging the jerk shad is a little more complicated than rigging a plastic worm or salamander because of the softness of the plastic and the thickness of the bait. I found that piercing the nose of the bait and then attempting to manipulate the body to get the hook through the back of the bait can significantly damage its nose.

I discovered that if I pierce the nose of the bait and completely run the hook though, I create a hole from the nose to the throat of the bait, similar to the rigging slots built into the plastic Sebile Soft Magic Swimmer. Once I create a nose hole, I then take the hook, place it beside the bait to measure it up, and then pierce the underside of the bait without bending and twisting it while backing the eye of the hook through the hole created in the “throat” of the bait to the nose.

A properly rigged jerk shad should behave in a very similar manner to its hard-bait cousins. You should be able to swim the bait with a side-to-side, “walk the dog” motion. But, there is more to the action of a jerk shad than just walking the dog. A jerk on the line should cause the bait to dart to one side as if making a sharp turn, with a slight upward trajectory. Successive jerks will cause a right-left movement, making the bait climb up the water column with each jerk or twitch until it breaches. A strike can occur at any time—before, during, or after the twitch/jerk. Many times the strike will occur as the bait comes to rest and begins its descent…so be ready.

It is possible to find one jerk shad that does everything; however, like any other bait, certain jerk shads will excel under certain conditions. For instance, though I swear by the Slug-Go, it does not cast well or skip. If I am looking for a long-casting shad that I can skip under low-hanging trees or docks, I switch to the Strike King Caffeine Shad. The downside of the Caffeine Shad is that it is very delicate, especially the tail, which does not stand up well to belligerent sunfish and perch. In this case, I will switch to a shad with a tougher tail, such as the Zoom Super Fluke. The Zoom Super Fluke, however, seems to sink slower than other shads, so I will either use it weighted or keep it weightless for shallow-water or topwater fishing.

My personal favorite jerk shad is the Yamamoto D-shad. Bass just punish and destroy it as if they are trying to hurt my feelings. However, like the Caffeine Shad, it is a delicate bait and rather pricey. The plastic is so soft that it borders on jelly. In some instances, you will be lucky to get one fish per shad.

Ironically, one of the reasons baits like the Yamamoto D-shad and Caffeine Shad are so effective is the formulation, and softness, of the plastic, which gives it some of the same dynamic qualities as their cousins, the Senko and Ocho worms. The tail flutters freely, they sink quickly, and they cast like bullets. Bass of all sizes attack these baits relentlessly, but that can be a problem, as small fish will rip the more delicate baits to pieces.

When I am in a situation where small fish are costing me pricey shads, I will downsize my shad and hook to target the small fish. For instance, I will go to a Yamamoto Shad Shape Worm or a 3-inch Yum Dinger with a #2 EWG hook. Even though these baits are smaller, they do tally some big fish.

Another option is to switch to a tougher bait, and through my experimentation, I found the Slug-Go to be the toughest and most durable of all the jerk shads. A Slug-Go stands up to multiple beatings from bass of all sizes, and it is for this reason that I always carry a bag of the 4.5-inchers with me.

Finally, I hang on to my beaten up jerk shads. After the nose has been ripped out and I can no longer rig it weightless, I trim the face off and rig it on a swimbait hook that features a screw-in nose, or on a snagless jighead with a spike for the nose, such as the Fin-Tec Title Shot Jig. Even though the face of the bait is toast, the tail still works its magic.