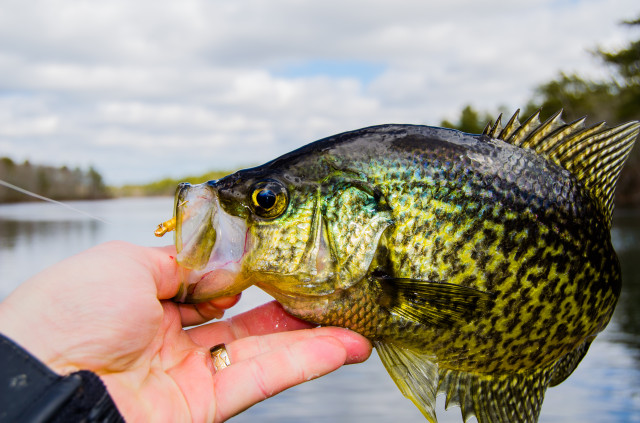 It’s kind of implied that the size and number of fish in a pond is proportional to length, narrowness and bumpiness of the dirt road that leads there. If that’s true, the pond I fished Saturday morning should hold some of the largest bass in the Northeast.

I gave my shocks a workout reaching the blue dot I’d spotted on Google Earth during some Friday-afternoon procrastination. The satellite image showed a thin tan line cutting through the woods that grazed past the pond, but I had no idea if there would be a pull out, or even a place to launch my kayak. Fifteen minutes into the ride along the single lane trail, I began to worry that there wouldn’t be any turnaround, and I’d be forced to reverse the whole way out. A couple miles later, I found the pond—and a well used launch area already occupied by three fishermen. So the pond wasn’t totally secret, but it was secret enough that one of the other fishermen came over and, after exchanging pleasantries, told me not to tell anyone about the pond.

The bass fishing was not spectacular. I landed a few, none larger than 14 inches, but the pond was full of crappie. I caught a few of the calicos while fishing for largemouths, before breaking out an ultralight rod and small jigs to target the crappies specifically. I found a huge school of the panfish in the deepest part of the pond.  I’d have 10 minutes of nonstop action, then the school would move and I’d spend 15 minutes trying to find it again. This went on for a little more than an hour before I went back to bass fishing.

When I returned to shore, and loaded my kayak, I saw a few fresh scratches on the side of my truck made during the ride in, and I added a few more before I reached the pavement. I’m going to get some touch-up paint to fix them, but not before I visit a few more ponds at the end of long dirt roads.