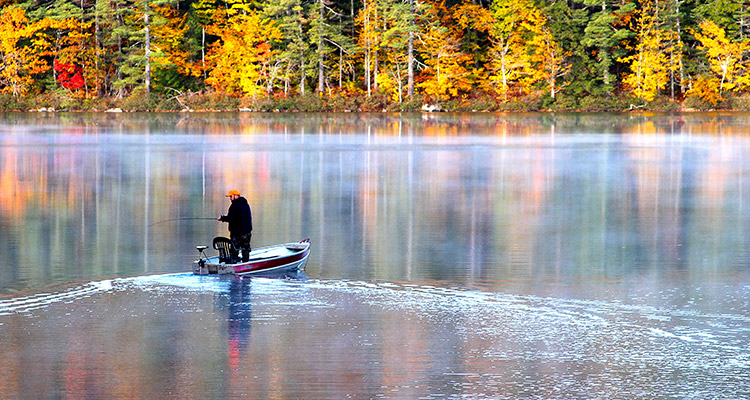 When my deer hunting plans fell through last November, I found myself with a week off and nothing else planned. The Sunday evening before my vacation, I contemplated the week ahead and the long “honey-do” list I’d put off for most of the summer. I thought I should maybe knock a few things off it before the snow started flying and winter set in, however, as I puttered around the garage, my Ranger boat kept catching my eye. There it sat, un-winterized and still loaded with my rods and tackle… ready to go… beckoning me. 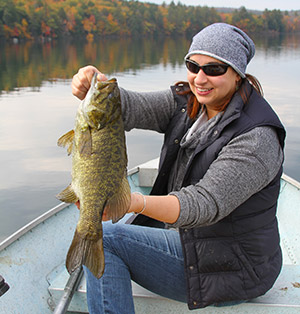 “It’s too late in the year to go bass fishing,” I thought to myself. “The air’s too cold. The water’s too cold. The fall bite was weeks ago.” As I rattled off the excuses not to go, each one sounded weaker than the one before. Actually, the forecast for the coming week was for perfect fall weather – bluebird skies, cool temperatures and light winds. Why not take the boat out for one last hurrah before putting her away for the winter? I had the time, the weather was nice, the boat and gear were ready and bass season was still open on my favorite lake. There was no reason not to go, so I made the decision that night – I’d hit the water the next day for one last bass trip of the year.

The next morning was a bit bizarre. I’d never bass fished this late in the year, and it was more than a little odd pulling the boat out of the garage with the thermometer registering 28°F. When I got to the launch, it was just before 10 a.m. and there was still a skim coating of ice on the ramp. “This is crazy,” I thought. “Shouldn’t I be sitting in the bush somewhere with my muzzleloader, looking for deer?”

An hour later, I couldn’t have disagreed with myself more. I had already caught two nice largemouths (a 3-pound, 10-ounce fish and a 4-pound, 14-ounce fish) plus a half-dozen smaller fish, and it only got better after that. So much so that I ended up fishing two more times that week.

When people think of fall bass fishing, they usually think of late September or early October, rarely November. I have to admit that before last fall, I was among those anglers. Sure, you will sometimes see the hardcore walleye and muskie guys out in late November, or even into December, but bass anglers generally pack the rods away and winterize their boats long before then. That’s a definite mistake, as I came to realize last fall. 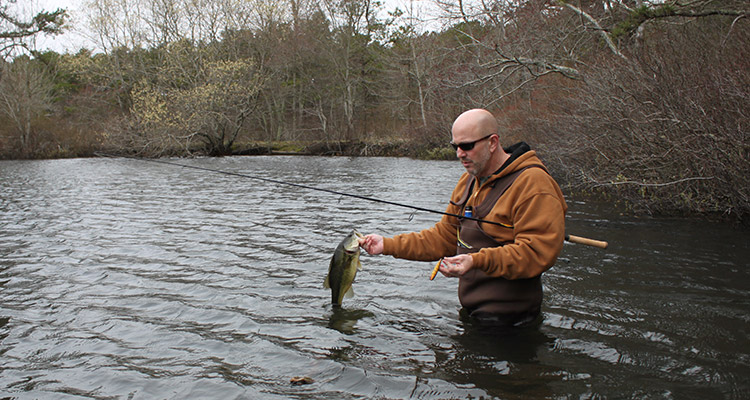 November bass fishing, as it turns out, can be just as productive as September and early October if you take the time to learn how bass transition to their early winter haunts. And a fall bass outing doesn’t mean you have to exclusively target those gangs of hungry smallies that are more synonymous with that time of year. Largemouth bass, and big ones at that, are more than happy to eat your lures late in the fall if you present your baits where and how the fish like them. Bass fishing at this time of year doesn’t require the typical summer arsenal of rods and tackle piled up on the front deck either. Two or three rods and a handful of lures will do the trick.

Late fall largemouth fishing is all about keying in on specific areas and structure and then working them with simple, yet effective, techniques. Prime areas to target during this period are rock ledges, scattered weed edges and isolated, deep offshore structure. The most important aspect of the first two is that they must offer quick access to deep water of 18 to 20 feet or better.

By early November, near-freezing overnight air temperatures have cooled the lake’s surface considerably and deeper water offers a slightly warmer refuge for bass. However, bluebird skies and a few hours of warm sun in the morning will draw bass up out of the depths and into the shallows where they hunt among the scattered, decaying vegetation and rocks, gorging on sluggish, frigid baitfish.

By the time I got the boat in the water that Monday morning, the air temperature had warmed up to 40°F or so and the surface temperature on the graph read 47°F. Not really knowing how or where to start the day, I picked up my crankbait rod and began covering water. By pure chance, I started casting along the closest weedline to the launch, in 10 to 12 feet of water, but near where the bottom dropped quickly to a depth of over 25 feet.

Being so late in the fall, the weed edge wasn’t nearly as well defined as it was in the summer. Clumps of vegetation were scattered, but some still looked surprisingly lush and green. As I slowly put the pieces of the puzzle together, I realized this was also the key to catching numbers of good fish. Most of my hits came when I pulled my lure slowly through weeds that were still green. Late fall bass, it seems, don’t want to work too hard for a meal.

The retrieve that achieved the best results was cranking my bait hard a couple times right off, to drive it down to depth, then crawling it back to the boat as slowly as I could. When the lure contacted weeds, I just lifted the rod tip and twitched it through gently, instead of ripping it out as I would in the summer. More times than not, as the crankbait slipped through the clump, I’d feel a bass suck it in. A medium-action 6-foot, 6-inch crankbait rod with a soft tip and spooled with 12-pound-test fluorocarbon line was essential in feeling the difference between weeds and fish.

As I said before, the fishing was so good on Monday that I couldn’t pass up a second (and third) trip that week, so the following Thursday I coaxed a co-worker, Tom Jones, out with me by promising big things.

The bass didn’t disappoint. That morning was even colder than the previous morning, but the sky was clear and the sun felt good as it warmed both us and the upper layers of the lake – perfect conditions to intercept hungry bass as they invaded the shallower water looking for an easy meal.

We began on the same weedbed I had fished on Monday, and I started catching bass right away on a crankbait with a slow, wide wobble. Tom likes to throw a spinnerbait and so, out of habit, that’s what he started with that morning. But, after nearly a half-hour without a bite, he switched over to a medium-diving crankbait and it didn’t take him long to connect with his first three-pounder of the day.

We finished working another long weed edge adjacent to a steep dropoff and caught a half-dozen good bass each. A light breeze had slowly pushed us off the weed edge, but by another stroke of luck, we discovered a second late-fall bass pattern for the week.

Looking down at the Lowrance, I saw that we had drifted into 22 feet of water and we were marking a small hump with several arcs around it. I pointed this out to Tom, and it didn’t take him long to drop his crankbait rod and pick up another, rigged with a plain jighead and Berkley Gulp straight-tail worm. He let the bait spiral to the bottom right next to the small piece of structure. Immediately his line jumped and he set the hook on what turned out to be a feisty 3 ½-pound smallmouth. When I saw that, I frantically began digging through my boxes and came up with a ¾-ounce silver Hopkins jigging spoon. I tied it on, dropped it down onto the hump, lifted, dropped, lifted, dropped and WHAM – a hit like a freight train! I landed a good smallmouth, just slightly smaller than Tom’s.

Realizing we had stumbled upon a little gold mine, we spent the next several hours wandering around the general area looking for similar pieces of structure in the deeper water. Every time we found one, we’d catch fish, and not just smallmouth. Several nice largemouth came out of 20 feet of water or more. Apparently not all of those late-fall deepwater largemouth make the trip upslope to the weed edge to feed for the day!

Similar to summer patterns, bass don’t require very large pieces of structure to congregate around in the fall. Summer bass anglers will flip and pitch to the smallest stick or branch that’s fallen in the water, as they can often hold a decent-sized bass or two – so too with offshore spots.

When late-fall bass slide off the steep drops into deeper water, seeking that extra couple of degrees in temperature, they still feel the urge to relate to something solid, regardless of how small it is. It can often be something as small as a chairsized boulder or a single sunken tree branch. The important thing to remember is that these pieces of structure are usually the only oddity on an otherwise featureless piece of the lake bottom. They will hold fish, and usually more than one.

High-quality color sonar units are a must to find and fish such structure – and GPS/sonar combos will make it that much easier for you to stay on the structure as you work it. I don’t have a combo unit on my boat yet, and the light wind we had that day kept blowing Tom and I off those little pieces of structure. We sometimes spent more time looking at the graph and moving around with the trolling motor trying to find them again than actually fishing them.

One of the great things about late-fall bass fishing is that there’s no need to get an early start. Hitting the water at 6 or 7 a.m. for the early-morning bite is unnecessary and can be rather painful in the freezing dawn temperatures! After all, this isn’t duck hunting – this is lazy man’s bass fishing. Sleep in and wait until the sun’s well up and the surface water temperature has inched upwards a few degrees. With water temperatures hovering in the 40s, bass need a couple of extra hours to warm up and begin to feed. On the water by 10 a.m., off by 3 p.m. These are short days, but possibly some of the most productive of the year!

As I drove back home from the lake on Friday, I realized that the end of my “deer season” bass fishing came much too quickly. I was wishing that I didn’t have to put the boat away for good this time, knowing that those largemouth and smallmouth were still out there, cruising around and on the hunt for those last precious meals before winter arrived. But the snow was coming all too soon and my summer “honey-do” list didn’t seem to be getting any shorter.