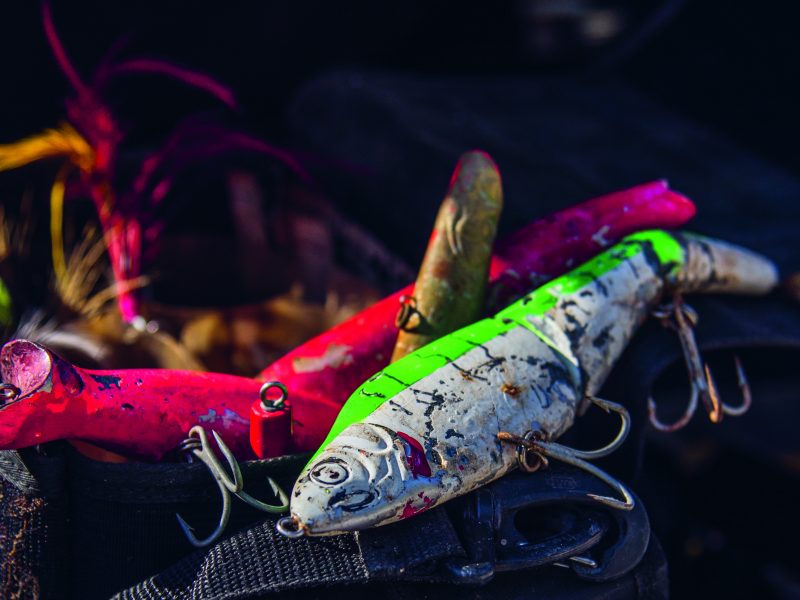 In my basement, on the shelf next to my box of replacement hooks and split rings, there’s an ever-growing collection of Krylon and Rust-Oleum spray paint cans. Colors include white and black, hot pink, chartreuse, cherry red, and metallic gold. There’s also a fair collection of nail polish in glossy purples, pinks, greens, coppers, and golds. Some of those I purchased at Wal-Mart, but most were pilfered from my wife’s makeup drawer.

These are the tools of the trade for Jim’s Custom Plug Colors, the pop-up operation that appears in my driveway and garage at various points throughout the surfcasting season. It started a few years back when the Foxborough Bass Pro Shops put Sebile Slow Sinker Magic Swimmers in size 228 on clearance for $9.99. Previously selling for closer to $30, I (and a great number of other striper fishermen) bought them in bulk. The catch was that they were all in the rainbow trout color.

I have no doubts that a rainbow-trout colored Magic Swimmer would catch striped bass, but I know beyond a shadow of a doubt that an all-white Magic Swimmer catches lots of striped bass, and big ones. When I got home, I scratched them up with sandpaper, gave them a coat of white spray paint, and a little later, added a second coat.

The inspiration for my art came from the stories of surfcasters of the 70s and 80s carrying cans of spray paint in their trucks to adjust their plug colors on the fly. Unlike them, I was doing it at home and could have used an air brush, but possessing neither the tools nor the talent, I stuck with Krylon and Rust-Oleum.

I use spray paint to touch up old plugs or paint over unproductive colors. Without a finishing coat, paint eventually chips off or loses its luster, but it takes just a couple minutes to apply a fresh coat. The nail polish adds detail like eyes, spots, or slashes of red at the gills.

My biggest bass of 2021 (barring a late-October miracle) fell to one of Jim’s custom colors—a gold-spray-painted needlefish. The original color had been, somewhat ironically, the shade referred to by surfcasters as “Block Island Green.” This was the same color that many surfcasters on Block Island during the glory days of the 1980s used to spray-paint their lures.

The modifications are crude at best, but they catch fish. It’s a simple and cheap way to customize lures, and for some of you, perhaps it will be a stepping stone toward buying an airbrush and doing it the “right” way. Not Jim’s Custom Plug Colors, though. I’ll continue to proudly cut corners and nick nail polish.