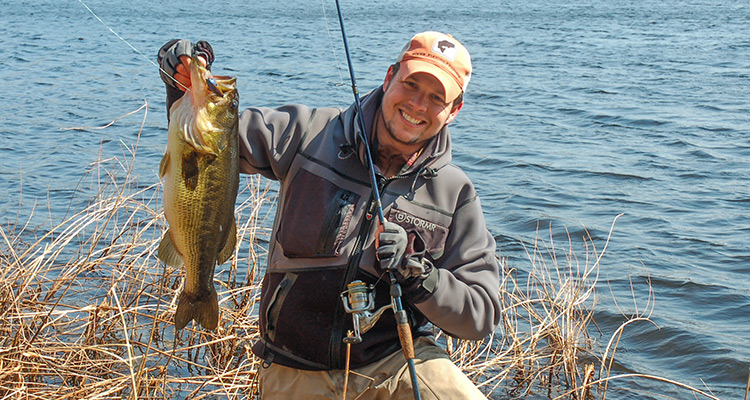 It’s a calm early morning in mid-October. The smoke from a wood stove hangs in the air along with the damp, earthy smell of wet leaves. My fishing buddy and I have snuck away for a day chasing largemouth. Gearing up with garments at the lake’s boat launch, I feel like a textile parfait of polyester and fleece topped off with outerwear icing. It’s a chilly boat ride to the sand flat, and I’m thankful it’s only 10 minutes.

We’ve fished the area before and are anticipating a decent day. In front of us is a sizable weed bed on a slow-tapering flat. The weeds thin out around 10 feet. From here it’s a mud-sand-rock mix until 21 feet, where the gentle slope meets a major drop-off. We focus on the deeper section of the plateau as it contains scattered rock piles that have proven to be largemouth magnets during cold-water conditions.

With the boat positioned just beyond the drop off, we each toss out a deep-diving crankbait. I feel the impact vibrations as my lure digs and deflects along the bottom. I reel slowly, pausing often. Eventually I feel a strike. Using a sweeping set, the crankbait rod loads up into a parabolic shape under the fish’s weight. The largemouth’s head shakes and aggressive runs peel drag. Yet the fish is no match for the strong but soft-action blank, which keeps the bait’s hooks pegged amidst the bass’s thrashing. Soon my partner slides the net under the fish, and with careful hands I remove the hooks, get a quick photo, and release the bucketmouth back into the cold water. It is the first of many bass we catch amidst a gorgeous autumn setting.

A Season of Change

Autumn is a time of transition as largemouth bass migrate from summer habitats to wintering areas. Early in the season it’s typical for fish to be scattered, but after several weeks of consistently cold nights, bass will concentrate in specific regions within a lake, such as deep rocky points or weed-covered, mid-lake humps.

Several lures will fool largemouth during the fall but it’s tough to beat a crankbait. The low-frequency wobble of these hard-baits regularly stimulates big fish to eat. Cranking autumn bass isn’t a one-size-fits-all-approach though, as the following shallow to deep water examples illustrate.

It’s true that bass spend the winter in deep-water regions within a lake, but in certain conditions they will lurk in skinny water zones until mid-autumn. Healthy weeds are paramount. Just as important is stable, warm weather that will boost water temperatures. Look for boulders along shallow shorelines as they will absorb and radiate the sun’s heat, attracting baitfish and, in turn, bass. Generally speaking, the best shallow zones in autumn are near deep water so bass can retreat to this region, a common behavior following the arrival of a cold front.

Shallow Scenario #2: Up The Creek

Another autumn pattern is that largemouth with follow baitfish migrating into a lake’s tributaries. Expect bass to hold near standing timber, lay-downs, outside weed edges, and under emergent vegetation. Fish will be aggressive and it’s common for a lot of big ones to be concentrated in small spaces. The action in tributaries can be incredible at times in the fall, so be sure to check them out.

It doesn’t happen everywhere, but in certain regions during early to mid-autumn, sizable populations of frogs will migrate from their summer habitat of grassy meadows, damp forests and wetlands to the muddy bottoms of lakes where they’ll spend the winter. Their movements typically are stimulated by damp or rainy nights. Marshes, tributaries and grassy shorelines are common lake entrance areas for these amphibians. Like so many predators, largemouth have an uncanny ability to anticipate this seasonal surge of available prey and will stage near the shoreline, waiting in ambush.

It’s tough to beat a fat-bodied, shallow-running crankbait for working the skinny water areas noted above. Lures like a Mann’s 1-Minus or Rapala DT Fat (01 or 03 size) are good choices. These baits have bulky profiles and create plenty of commotion thanks to their wide-wobbling action. Using a bait with rattles is good in the stained water conditions that can be common when fishing tributaries.

One way to fish these lures is making short casts to dissect specific cover and structure areas, such as the outer edges of lily pads or along steep shoreline banks. It’s effective too for probing the branches and openings of standing timber or trees extending into the water from shore. Otherwise, long prospecting casts work for sifting through stretches of shallow water.

As far as retrieve styles go, slow is often best. A faster pace has its place at times (see sidebar), but a lethargic tempo causing the lure to saunter with a seductive wobble will most often evoke strikes. Pauses are a must. Get in the habit too of occasionally twitching the lure after stopping it – think a walk-the-dog type of motion. This light snap causes certain shallow-running cranks to pivot 180 degrees. In fish-speak, this stare-down is a challenge, and over the years it has enraged plenty of following bass into attacking.

As autumn progresses, mid-depth and deep water habitats become the go-to areas for largemouth. Fingers on weed beds that extend into deep water will hold bass. Weed-covered humps and bars are two other largemouth hotspots. Overall, any deep weeds are a good bet because as a lake’s shallow vegetation dies, much of the food chain abandons the skinny water and moves deeper. Bass, like their forage, take up residence on the last surviving deep, healthy weeds.

Another autumn standby is a mid-depth flat beside largemouth summertime territory, like a reedy shoreline or a weedy bay. Clam beds, pebble mounds, broken rocks, and boulders will attract bass on these plateau areas. Long bars extending into deep water off of a flat are also good bets. Using sonar will help locate these fish-holding structures. When fishing small isolated, features put out a marker buoy to serve as a casting target.

The site where rocks have broken away from the shore and slid into deep water is another autumn hotspot. These chunky rock zones are loaded with places for bass to hide in ambush. There aren’t usually a lot of these geological features on a lake, but where they do exist they’re often home to the biggest bass. Deep rocky points off of shore or islands are worth exploring as well.

A Winning Team of Divers

Common autumn strategies for mid- to deep-divers include: running a lure down the outside edge of a weed wall, positioning a bait just above the weed tops on a deep hump, lightly banging it across boulders, or swimming it down the side of a ledge. Again, reeling and pausing is the winning recipe for cold-water bass, but don’t get too formulaic or the bait will appear unnatural. Mix-up a lure’s swimming distance as well as the frequency and length of pauses.

Bottom contact will boost hits when fishing deep cranks around rocks, sand or mud areas. A bait’s bill jabbing into the floor will produce a mud trail. As crayfish and fish hugging bottom frequently make a silt cloud when trying to escape predators, and bass will instinctually investigate these disturbances.
Also, pay attention to vibration differences transmitted through the fishing rod when banging bottom with a crankbait. A change from a soft to hard bottom is a sign the bait may have entered a bass’ territory as largemouth will concentrate on these structure anomalies. When you feel this switch, always be ready for a hit. Remember, fishing a crankbait centers around probing bass habitat, so don’t be shy about putting lures near hazards. You’ll snag a few times but the rewards are worth it.

Lipless crankbaits also deserve water time in autumn as their rattles and tight-wobbling action are seductive to bass. These lures excel at fishing the edges of cover. When they hang up on deep weeds ripping them free will stimulate strikes.

Unlike diving crankbaits that float or suspend, lipless models sink. This adds another presentation option to a stop-and-go swim sequence. Baits can be cast out and allowed to sink to bottom or counted down to a specific depth, which is handy when covering mid-depth weeds.

A yo-yo retrieve is also good as it creates a vertical zigzag pattern through the water column that can help fool conditioned bass to bite. This sequence works well to follow the contours of drop offs and deep ledges where bass regularly hang out in autumn. The Cotton Cordell Super Spot, Rapala Clackin’ Rap, and Strike King Red Eye Shad are popular versions of these lures.

Using the proper equipment is essential to consistent crankbait success. A largemouth attacks by sucking in its prey along with a large volume of water. This, combined with the tight-line properties of a horizontal retrieve, makes it critical to use a medium-action rod with plenty of give to allow a bass to fully inhale a moving crankbait.

A soft flex stick gives a crankbait a freer range of motion for a more natural action. It also absorbs the shock of head shakes and powerful runs during the fight. Using too stiff of a rod limits a lure’s action, and how well a bass can grab the offering. It can boost the risk of the hooks pulling free during battle as well.

Increased rod length (i.e., 7 feet or longer) is also beneficial. It provides better control over the path of a crankbait during the retrieve, along with more leverage when playing fish. Long poles extend casting distance too, letting you cover more water. A long cast gives a crankbait more swimming time in its target depth zone because a certain portion of each retrieve is spent on the descent and ascent of these diving lures.

Putting It in Low Gear

Most cranking enthusiasts rely on a 5:1 baitcasting reel because it has a slower retrieve compared to a higher-ratio model (e.g., 6:1 or 7:1). A 5:1 makes a crankbait move with a leisurely saunter, accentuating its action. This is particularly important in autumn when cold water temperatures can cause fish to be sluggish.

When it comes to spooling a cranking reel, monofilament or fluorocarbon line will both provide ample stretch to allow a bass engulf a bait. Line diameter influences lure running depth. Dropping from 14- or 12-pound test to a thinner diameter 10-pound test line will increase the diving depth by an additional foot or two.

Landing trophies demands quality hooks. Sticky points and decent gaps are a must to keep bass pegged as they will use a crankbait’s bulk as leverage to try and shake free. I’ve seen bruiser bucketmouths landed only by the extended hook of a VMC Sure Set. Certain anglers I know are fanatical about swapping out factory hooks with the Mustad Kevin VanDam Elite Triple Grip Treble. There are others of course, such as models by Gamakatsu or Owner. In summary, pay attention to the quality and condition of hooks on cranks. Always replace inferior or dull ones.

Autumn is a phenomenal time to be on the water chasing largemouth. Boat traffic is minimal, plus the fish are fat and feeding. When the leaves burst into a rich tapestry of red, orange and yellow it’s the signal to start casting crankbaits.