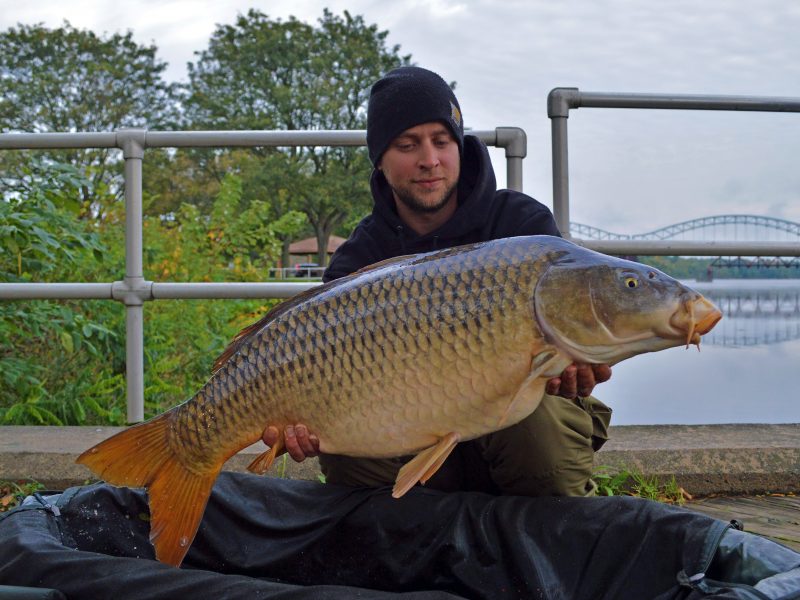 The 2018 Fishin’ Factory 3’s highly anticipated Carp Tournament, spanning from October 11th-14th, brought in a number of carp ready anglers. Organized by Connecticut local Kyle Carlson, Pete Aarristad from CT DEEP, and former tournament head David Moore the Connecticut River was ready for 4 days of hooking into quality carp of all types. Anglers had randomly drawn fishing locations, along a 20+ mile stretch of the Connecticut River between Hartford and East Haddam, where they would be fishing for the next 4 days. Special permission was granted by all towns involved to use their lands for this event. At the start of the tournament participants were met with the effects of a southern tropical storm that hit Connecticut with torrential downpours. Creating heavy river flow, high waters, floating debris, and poor visibility, which would only worsen over the following days. This created an unexpected challenge for anglers looking to hook into a winning carp.

Being a catch and release tournament, the safety of each fish was a main focal point pushed by the tournament heads. All anglers were required to use landing mats, tight woven mesh or rubber nets, and weigh slings. All landed carp were sacked up in the water alive and anglers would call to have one of the three weigh marshals, Pat Schunk, Lee Hurn, or myself, drive to them and verify their fish. This enabled each marshal to have a hand in the release of all carp and make sure they swam away healthy and ready to be caught again.

Despite having less than ideal conditions, many quality carp were landed. With the possibility of winning $25,000, by breaking the current Connecticut state record carp (43lbs and 12oz), kept anglers’ lines in the water until the last minutes of the tournament. After a challenging 4 days, anglers met to be rewarded for their fish. Big rewards would be handed out for largest carp of each species, biggest overall fish, and highest combined weight of 4 fish would determine the top 3 teams.

2nd Place $3,500 prize with a combined weight of 106lbs and 1oz went to Norbert Samok and Laszlo Kovaks.

3rd Place $1,900 prize with a total weight of 100lbs and 9ozs was brought in by Ray Strong and Ray Chagnon.

Largest Fantail: Caught by Iain Sorrell and Steve Clow which weighed in at 18lbs and 7ozs. They took home an $100 gift card to Fishin’ Factory 3.

Largest Mirror Carp: Caught by Norbert Samok and Laszlo Kovaks weighed in at 22lbs and 9ozs landing them $500.

Biggest Tournament Fish: 34lbs was caught at the Salmon River Boat launch and fetch a prize of $3,800.

After all the main prizes were given out, there was a raffle giving away donated goods for all anglers and marshals involved. These prizes were donated by the following organizations: Wacker Bait and Tackle, Trilogy Carp Baits, Carpmaxx Baits, Orient Rods, Record Baits, Carp Bait USA, The Carp Anglers Group, Big Carp Tackle, Shimano, Quality Discount Bait, Fishin’ Factory 3, and Costa Sunglasses.

Stay tuned for information on next years tournament @fishinfactory3ctcarpopen on Instagram and “2018 Fishin’ Facory 3 CT Carp Open” on Facebook for more pictures of this year’s event and updates on next year’s tournament.