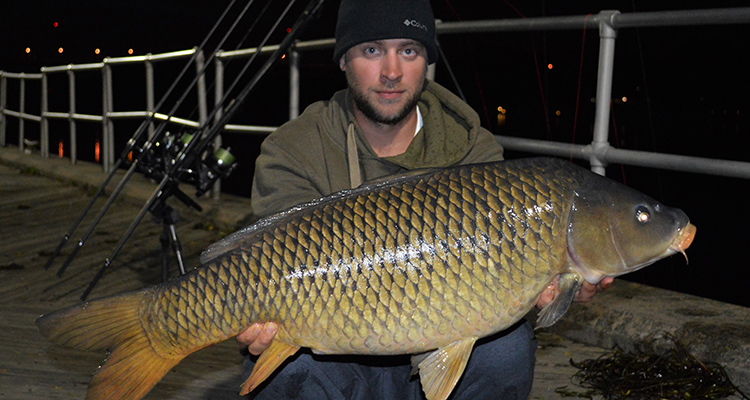 The Connecticut Carp Open, a catch and release only tournament that enforces strict fish care rules, was held the second week of October.

The tournament started with a peg draw at the Connecticut Cabela’s on Sunday, October 9, where teams of two and individual anglers chose their spots from a random peg draw. Anglers pulled out two pegs at once and then had to choose which peg they wanted. These pegs were pre-designated from Essex, Connecticut all the way up to Enfield, Connecticut on the Connecticut River. The next morning, these teams or individuals went down to their spots to set up. Fishing began at 10am and most people fished non-stop until the finish time at 10am Friday, October 14th.

On the second day anglers had the option to move to a spot that was not occupied if they pleased. The tournament had weigh marshals who were on duty from early morning up to 10pm weighing carp. The minimum size for entering fish was 22 pounds, but many exceeded that. Since the tournament was only catch and release, anglers would sac their fish and hold them in the water until a weigh marshal could weigh and verify the fish was released safely.

There were a lot of good prizes to be won, including $100,000 if anyone caught the state record (it would have to exceed 43 pounds 12 ounces). This was a “big 4” tournament, meaning the top 4 heaviest fish over 22 pounds would be given out for 4 places.

Phil Nathan also had the biggest overall fish at just over 37 pounds, winning him an extra $1,500.

Marcin Targonski caught the biggest mirror carp, which hit just over 25 pounds and landed him $500.