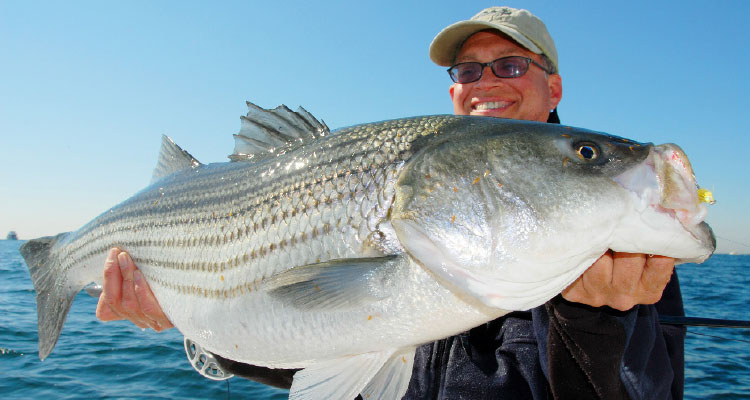 “Where the hell are you?” said Capt. David Azar, before I could speak. We were going to make one last go of it before pulling the boat and calling it a season.

“Get a cup of coffee and I’ll be there in a half an hour,” I said. An hour later I was peeling back the fingers of my fleece gloves so that I could chip the ice off the overboard discharge tube of my outboard. I could see my breath as I blew on the tips of my fingers in hopes that I would soon be able to feel them again. By now I was beginning to seriously doubt my decision to not pull the boat two weeks ago. My outboard sputtered and stalled when I turned the key. Apparently it wasn’t happy about being out on this cold water either. After a few words of encouragement, it sputtered to life and we were off.

Ten minutes later we were greeted at Breezy Point Jetty by acres of gannets dive-bombing the water. As we approached, one of the most extraordinary bass blitzes occurred right before our eyes. Hundreds of fish north of 20 pounds were plowing though schools of 10-inch herring. We released so many fish that day in the 20- to 30-pound range that we lost count. Good thing I hadn’t pulled the boat!

Before getting into the details of such extraordinary December fishing, let me offer the following disclaimer: It’s usually not that good. Any local captain will tell you that December in New York Harbor is dominated by schoolies. Usually, you’ll find plenty of these small fish under birds on peanut bunker or sand eels. Once I start seeing vast numbers of those 20-inch fish, I know it’s going to be over soon. Yet every few years the stars align and the conditions are just right for all those big bass that have been hanging out in Maine, New Hampshire, Massachusetts, Rhode Island and Connecticut to come booking down the coast, right about the time the herring arrive. When that happens, all hell breaks loose.

It’s no secret that big bait brings in big fish, and these herring are generally in the 10-inch range. And it’s also well known that bass tend to get a little crazy in the fall. Particularly in the late fall. As they prepare for the long migration, these fish eat anything and everything, attacking their meals with reckless abandon. Far from being over, December can be the best month of the year for sticking a trophy bass on light tackle. But as I mentioned, it certainly doesn’t happen every year.

Undoubtedly, a successful and productive December depends on the timing of the striped bass migration, and that has a lot to do with the weather. In my experience, we need to have a relatively warm November for the stripers to hang around long enough for their migration to intersect that of the herring. If it gets cold and nasty early in November, the larger fish tend to move down the coast faster than they would have otherwise, thereby never encountering the herring in our neck of the woods. Optimally, what we want is a benign November without any snow. It doesn’t matter that much if it gets cold quickly in December as it would take a while for the water temp to catch up. Plus, cold snaps turn fish on and make them feed like crazy. Of course getting out in such conditions presents its own set of challenges.

Such outstanding fishing in Lower New York Harbor also depends on the arrival of the herring, of course. Usually it’s late November when these fish head to overwintering areas from the New York Bight to Cape Hatteras. In order to see a large number of herring in Lower New York Harbor, cold conditions are key. Herring are a coldwater species, and their arrival usually depends on a good stint of below freezing air temperatures. While I believe that their numbers are declining due to a high-volume sea herring fishery in New England (mostly for lobster bait), they are still considered one of the most abundant fish species of the world. Living and traveling in large schools, these silvery streamlined fish are 9 to 14 inches long.

Since 2001 we’ve had several years where we’ve had big fish on herring, but it never lasted more than a day or two. Usually, once those cold snaps start happening in December, they don’t stop. And with cold snaps, you usually get hard northwest wind, which makes getting out to the fish difficult. I’d have to think there were plenty of crazy-big bass blitzes on herring on those days where it was just too cold and too windy to sail. So it’s a reasonable possibility that this sort of extraordinary fishing happens for a week or two during every December, but the weather is just too nasty for anyone to get out and be there for the blitzes. And really, few folks would even bother withstanding such uninviting elements like freezing salt spray, especially after December 15, when striper fishing in New York State becomes catch and release only.

There have also been plenty of years when the herring arrive and all we have are schoolies around because the big fish have already left. It’s interesting to witness a 20-inch fish trying to eat a 10-inch bait, but not quite as fun as watching a 20-pounder eat a pencil popper.

Striped bass can certainly withstand some very cold water temperatures. I’ve found that they’re not adverse to water temperatures in the high 40’s, as long as that big bait is around. That leaves us a large space in the late fall/early winter where these fish are still actively feeding. And when they feed during this time of the year, man, they really feed! But, if there isn’t much other bait around, such as peanut bunker or sand eels, the larger bass aren’t likely to stick around long.

Finding herring can be as easy as looking for gannets. These are large birds. They look like a seagull on steroids, yet they are easily distinguished not only due to their size but by the fact that they shoot straight down into the water from great heights, actually submersing themselves completely to catch their prey. Gannets tend to follow larger baits, and when they arrive in the late fall, they are almost always on herring.

My favorite bait for the herring-crazed bass is a blue-and-white pencil popper. The noise-making capabilities and the enticing side-to-side wounded-baitfish action gets a striper’s attention right quick, and their profile looks very much like a herring’s. If you pick up a herring you will also notice a blue tint to its back, thus the reason I prefer to use the blue and white color. The primary reason this is my first choice out of the box is because of the awesome surface strikes the pencil will draw. Bass just hammer these things, sometimes coming completely out of the water to grab them. There are dozens of manufacturers, but I use the plastic Cotton Cordell pencil popper for a few reasons. The first is the fact that it floats. Sometimes, particularly later in the day, you’ll get increasingly wary fish that follow your plug, boiling on it, but not striking it. When this happens I find I get a lot of strikes by pausing the bait, leaving it dead in the water. I get a lot of hard takes once I start retrieving it after such a pause. You simply can’t do that if you have a plug that sinks. There’s also the added benefit of keeping the plug in the water longer with such pauses. I also like these baits because the have a rattle in them that undoubtedly draws attention.

Next on my list of go-to lures would be the 9-inch Slug-Go or the 10-inch Hogy Doublewide. Both of these baits offer a pretty good size and profile imitation of a wounded herring, and both draw some ferocious surface strikes when worked on or just under the surface. Of course, you can fish down deep also, and guys do stick some pretty good fish with diamond jigs, weighted soft-plastics and bucktails, but why would you want to bother doing that when you can catch them on the surface? Big, ravenous, surface-feeding stripers is what the late-season New York Harbor fishing is all about in my book. If you’re a fly-fisher, throw big slender flies. Sure there are herring patterns out there, but anything with a lot of long feathers seems to work just fine in this situation.

If you fish the Lower New York Harbor area, perhaps you should think twice before winterizing the boat before Thanksgiving, or putting all your surf gear away for the winter. In December, striped bass are still making their migration down to their wintering grounds off North Carolina and Virginia. It’s quite a long journey, and they burn a lot of calories along the way, so these bass feel a strong biological urge to fatten up and pack on fuel for the trip. If the weather patterns allow a meeting of the herring and stripers in New York waters, it can result in some of the most extraordinary blitzes of the year. Let’s hope that happens this year.

This article was originally published online in December 2016.