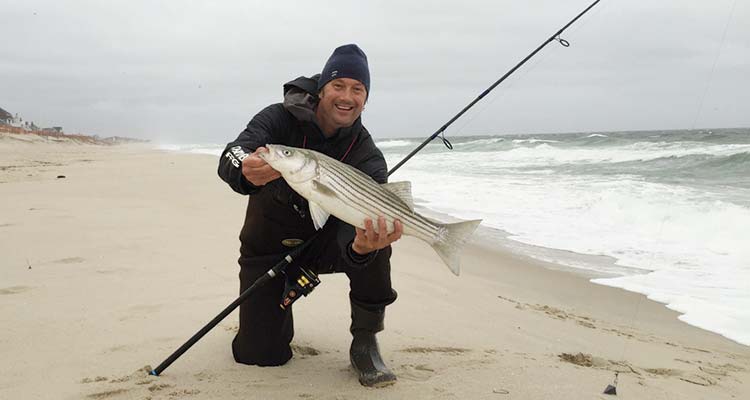 Soaking a clam bait on a sun-warmed, outgoing tide is a great way to search for your first keeper of the season.

The accepted theory is that during a storm, the raging surf dislodges clams, tumbles them about, and smashes them against each other or on the bottom with such force that the shells crack and the gooey insides spill out for scavenging stripers to slurp down. Somewhere along the line, a surfcaster made this discovery, and uncovered one of the finest baits you can throw for spring stripers.

Clams are, in some ways, a regional bait. From South Jersey to the South Shore of Long Island, and again from Boston to Downeast Maine, every tackle shop worth its salt keeps fresh clams—or at least fresh salted clams—in stock during the striper season. From Connecticut to Cape Cod, however, it’s a rare thing to find a surfcaster slinging clams. A migrating striper doesn’t suddenly stop eating clams as it passes through this zone, and a surfcaster who spikes a rod with some fresh clams in Rhode Island or on the Cape could be handsomely rewarded with several large bass during the opening weeks of the spring run.

I’ve always liked clams as an early-season bait—something to throw before large baitfish, such as bunker, show up in numbers. In recent years, it seems like the bunker schools have been arriving before the stripers, yet clams still shine in the early season. The reason, most anglers agree, is because in cold water stripers are more likely to be scavenging on the bottom for an easy meal than chasing baitfish.

Clams are best fished on circle hooks, as even small stripers will quickly swallow them. Thread them onto the hook, starting with the soft “belly” and ending at the more muscular foot. A few wraps of elastic thread will keep the soft bait in place for the cast and help it resist the pecks of smaller bait-stealers.

A standard fish-finder rig works just fine for clams, although some fishermen prefer a high-low rig. I’ve always liked a 30-inch leader of 30- or 40-pound test fixed with a 6/0 or 7/0 Gamakatsu octopus-style circle hook. The weight depends on the current. For open beaches and moderate surf, 3- to 5-ounce Hatteras or “frog tongue” sinkers work well, while a 2- to 3-ounce pyramid sinker does just fine in the bays. Place the weight on a fishfinder sinker slide, and thread it onto the main line ahead of a bead and a barrel swivel separating the main line from the leader.

Fish the clams around cuts in the sandbar or in bowls. If skates or dogfish are finding your baits first, ride it out for a little. The bass will sometimes move through at a certain stage of the tide, and once they do, they will beat the skates and dogfish to your bait.

Clams are also an excellent bait to fish inside the bays and even in freshwater rivers. I know several fishermen who have used them as an alternative to the expensive bloodworms in the tidal sections of the Delaware River, with great success. Soaking a clam bait on a sun-warmed mud flat on the outgoing tide is a great way to search for your first keeper of the season.

As with any bait, fresh is best. Buy the clams in the shells and shuck each one just before baiting up. If fresh clams are unavailable, salted is a distant second-best. Clams are salted so they’ll stay on the hook better during the cast, but the use of elastic thread negates the need for them. If given the choice, always choose fresh, and use unsalted frozen clams only as a last resort. They are too soft to hold a hook and too washed out to produce much scent. Depending on the size of the fish and your location, you might use a half or whole clam as bait. Early in the season, a smaller bait often gets more bites.

Clams work in all conditions, and you don’t need to wait for a storm to churn up the surf for them to be successful. However, if a storm is moving through and the water is clean and weed-free, make sure you buy a few extra clams—you don’t want to run out of bait in the middle of a red-hot striper bite.