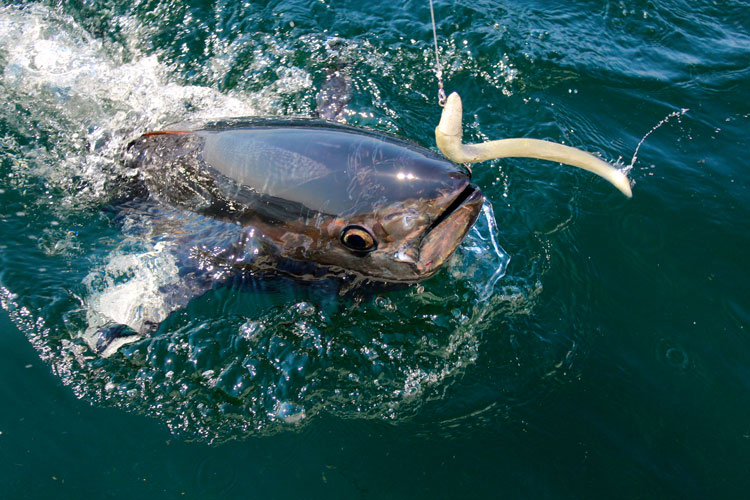 Being successful in fishing requires contending with change. Nothing ever remains constant in nature, and that includes environmental factors like the wind speed and direction, water temperature, and local weather. Current speeds and tides are always changing, the moon waxes and wanes, and baitfish, whales, and all sea life–including the species we pursue–respond with changes in location and behavior. These changes occur on all scales: annually, weekly, daily, and even during the course of a single fishing trip. It’s how we adjust our fishing techniques to produce the best outcome in a given situation and prepare for the conditions that may prevail in the near future that makes us better fishermen.

While the list of variables that a fisherman contends with may sound daunting, there are usually several consistent short-term and long-term patterns that emerge in any fishery to rely on season after season. Rules of thumb fall into place over the years one spends on the water, revealing favorite fishing setups, lures and techniques. So, we equip ourselves with a core toolset of fishing rods, reels and tackle broad enough to cover any likely scenarios.

If a day arrives when nothing in the angler’s toolset catches a fish, it can be written off as an anomaly. Then, days two and three occur, and your favorite gear and can’t-miss techniques have gone cold despite the tweaks you apply, such as going to lighter line or changing up the color and style of your lures. Frustration and disbelief set in as the familiarity and order you had found disappears on the winds of change that blow yet again, this time at a higher velocity than before.

I found myself in this situation one season while targeting bluefin tuna. Last summer began better than expected, with the fish arriving in big numbers in early July even though we typically expect the spike in activity to occur closer to August. The bite off Chatham and Nauset was above average and provided a bounty of spinning-gear action, jigging RonZ baits close to shore. The tuna, whales and striped bass intermingled, making for some fantastic half-day striped bass fishing charters that also featured whale watching and bluefin tuna hook-ups!

During this stretch, the tuna were regularly showing themselves, popping up on the surface and confirming that you were in the right area for casting or vertical jigging. Then, as if some higher power flipped a switch, it became hard to catch tuna on spinning gear. I burned gas searching for those surface-feeding fish, but they could not be found.

Fortunately, every angler’s preferred anthology of fishing gear differs slightly from the next. This increases the likelihood that despite the abrupt changes taking place, someone on the water will have a combination of gear and tackle that works. The feeling of being that individual with the seemingly magical gear of the moment is great, but this magic rarely goes unnoticed. As I searched for the birds and whales with my spinning-gear tuna setups, I could not ignore the chatter on the radio of how well trolling gear was performing. After a few more days, I put my RonZ tail between my legs and went down into the basement to unearth the trolling gear.

I picked up my spreader bars, which had sat on the shelf for over five years, relics from a former favored toolset. Replacing the lines on all of them, I headed out the next day aboard the Reel Deel with renewed vigor, convinced that change would not get me down! My rejuvenated rigs hit the water, and all day I trolled, catching nothing while everyone else around me hooked up. I was clearly the spinning-rod guy who had dusted off his old trolling gear hoping for some success, and I was definitely doing something wrong. After more research and recon, I learned the hot thing was having Play Action birds on the bar. This was a new development since the days when I had focused on trolling, and apparently it made all the difference in the world.

Relearning how to troll became a fun challenge, even though my beloved vertical-jigging technique had to be set aside. I couldn’t believe how much this technique had changed and evolved in just a few years. I became curious about new experiences, such as many days spent trolling when we wouldn’t mark any fish and wouldn’t see any fish on the surface. There would be no feeding birds anywhere–it felt akin to fishing the desert. But upon setting out the rigs and putting in the time, multiple fish were landed per day in an area that had no traceable signs of life except for balls of bait. The theory behind this atypical scenario was that the tuna were surface-cruising and when a boat went over the group, they would swim off to the side–hence no marks on the sonar. Since they were cruising and not actively feeding, the birds did not congregate above them, but the trolling rigs still managed to raise their interest enough to produce a hook-up. The change that transpired aboard my charter boat over those few weeks, as we transitioned from vertically jigging RonZs to trolling bars, felt monumental.

Trolling from a center console boat has pros and cons in comparison to larger, cabin cruiser-style vessels. The most obvious negative is being exposed to the weather during inclement conditions. A rugged set of foul-weather gear will help, but nonetheless your comfort level on not-so-fair-weather days will be reduced. Fortunately, a center console boat does offer several advantages.

These boats possess an affinity for speed, allowing you to get offshore quickly, particularly on nicer days. Center consoles also have strong points related specifically to fishing technique. When trolling bars, outriggers get the spread of your rigs farther apart (which is what you want), and the beauty of these bird bars is that they float, so you don’t need outriggers that are set up high. If anything, a wider spread is better than a higher presentation. In previous years of trolling, my farthest rig would be 100 feet behind the boat, but now sending the rig out 100 yards behind the boat seems to work the best. Some anglers would disagree about putting rigs so far back, yet on these farthest deployments, using straight braid to a swivel on the outrigger provided for more solid hook-ups. Granted, getting a tangle in such a setup quickly becomes messy; however, with this configuration I can also get away with using smaller reels. For those anglers who don’t want to troll with the heavy artillery of 80s or 130s, using braid on the 50s and 70s allows us to avoid those bigger reels and still have enough capacity just in case we hooked into big one.

Another bonus of center console tuna fishing is the added ability to troll off the back and still cast off the front, exercising two techniques to increase your odds of hooking a fish. Casting while bringing in a trolled fish often provokes a second strike, even with no visible activity. On many days, I’d tell one angler to keep casting as a second angler reeled in the trolled hook-up, and we often heard the jubilant cry of, “Doubled up!” We learned that it didn’t have to be “all or nothing” when it came to spinning gear, and that having both sets of gear ready to go could increase our opportunities.

Figuring out how to catch fish on the troll after the jigging and popping bite slowed solved one part of the equation; I still needed to find a way to satisfy the hard-core sector of my clientele who strongly desired spinning rod action.

I initially brought the spinning gear on trips that I planned for trolling mostly due to charter customer request. One of the challenges of being a charter captain is assessing a client’s willingness to switch from his or her preferred method when it is not producing, as the ultimate goal remains maximizing the chance of a hook-up.

On my Reel Dealer-o-meter, those easygoing anglers who reside in the center of the spectrum were fine with most any fishing gear or method of the day, given the end result was likely to be a fish in the boat. At the other end of the spectrum are the “jig and pop” folks, who had no interest whatsoever in trolling. These customers’ trips were already booked on the calendar, and as the trolling bite persisted with phenomenal catch ratios, I needed to come up with a spinning/trolling hybrid fishing technique that would keep them happy.

Luckily, I had my good friend, Ron Poirier of RonZ baits, to help me ponder this fishing riddle. A solution soon emerged, and Ron excitedly arrived at my house one morning with a trolling version of a RonZ. After some discussion, he crafted a single RonZ with little birds in front of it that could be trolled with the lighter spinning gear setups. I admit I had an initial level of skepticism about the effectiveness of this new rig, but I gladly set up a few rods with it so that the wish of landing a tuna on spinning gear could be a possibility for those customers who desired it.

Like most of Ron’s inventions, adding this new trolling lure to the lineup caught fish! Not only could I stay on the more-productive trolling methods for catching fish, but my anti-trolling customers also came around to this new practice, preferring it to running around in the boat all day long, failing to spot busting fish.

Change Can Do You Good

Drifting live bait while vertically jigging will always be my preferred strategy for effectively targeting bluefin tuna, but I will be the first to admit that after recovering and adapting to the changes, I had an absolute blast trolling because it was so successful. There is nothing like being shoved out of your comfort zone and persevering to triumph!

After summer waved goodbye and September rolled into autumn, the troll bite slowed down and the spinning bite returned from its mysterious hiatus. The drifting days resumed off Provincetown, bringing in slightly smaller fish in the 45- to 60-pound range, with an occasional 150-pounder mixed in. The tuna fishing felt familiar once again as I listened to the recognizable peeling drag of Van Staal spinning reels.

The trolling gear will stay close at hand, to be called upon again if needed. In the evolving environment of bluefin tuna fishing, change can be good as it will always lead us to our next great fishing adventure.